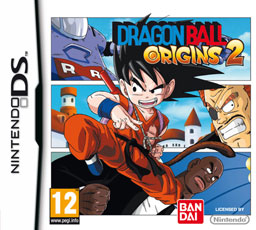 Overview:
There have been many Dragon Ball Z games throughout the years, and they have reached high fame for portraying the over-the-top action of the fighting series. But there have been barely any games portraying young Goku before he was fighting Saiyans and beings from beyond the stars. With the first game already in the books, Namco Bandai brings us Dragon Ball: Origins 2 as it continues Son Goku’s search for the Dragon Balls.

Story:
The story itself takes place through the Red Ribbon Army arc of the manga and anime, as Goku fights his way from the smallest soldier all the way to their leader in his search for the Dragon Balls, which when all seven are collected can grant any wish the collector desires. 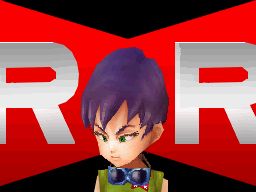 The story continues right where the first Dragon Ball: Origins left off, with young Goku sitting on the Flying Nimbus in search of the fabled Dragon Balls. For those who don’t play the first game there is not much missing in the way of storyline to worry about. You will not be understanding some things at first, and a bit of knowledge about the story itself will be of great assistance to your overall enjoyment.

Plus the story is told in an episodic way, such as you would find in the manga or anime via the chapters or episodes. This is a nice touch and a good transition as various cut-scenes are portrayed during this jump between episodes.

Graphics:
As you begin your journey into the world of Dragon Ball you will notice that the backgrounds and the areas you will be journeying through occasionally are left behind when it comes to the rest of the action occurring on the screen. Occasionally the backdrop you will be seeing will appear bland and unnoticeable, but other times you will be amazed at where you are fighting at, this bit of inconsistency provides a feeling of rushed environmental graphics. 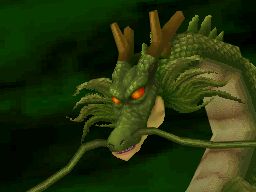 One thing however that does not suffer from a rush, are the characters. Each of the characters moves smoothly through their battle motions regardless of what fighting technique you use. The cut-scenes displayed throughout the game show impressive character design with facial expressions that mimic the both the Anime and the Manga amazingly well. You will see many funny expressions such as Goku’s silly wide mouthed grin, or Bulma’s surprise. Another nice feature is that the cut-scenes occupy both the top and bottom screen rather than be constrained to one, which is a good touch. The graphics have an extreme manga style feature, including when enemies are and they explode into smoke saying Boom! The feature of these graphics are perfect for the DS and Dragon Ball.

Sound:
On the other hand the background music, is a bit depressing. Instead of using various Dragon Ball theme music, you are treated to bits of music that sound similar to anything you would hear normally. Plus most of the text is treated as just that, text. There is the occasional voice over clip that will play during a cut scene and when it does it sounds just like they would from the show itself. It is unfortunate that they were not used more often, but it does provide a nice surprise when you an occasional voice inserted into the standard cut-scene.

Game play:
Dragon Ball Origins 2 takes an interesting turn on the franchise as they convert the game into a top-down brawling game.  You traverse various areas around the world through set paths that are yours to navigate.  Everything is strictly structured and yours to advance through with a relatively long story.

Movement is controlled through either the stylus, or the buttons, or even both if you make the choice.  The buttons are a preferable option of control due to the way that you can easily string combo attacks and finishers together with ease as you battle through the various enemies you will be facing. Another little feature is that during story specific battles the game will turn into your standard fighting game side view as you do battle against your opponent old school fighting game style. There are a large amount of attacks at your disposal and a few crushing finishers as well, but this is further expanded upon by the additional characters you have a chance to play as. 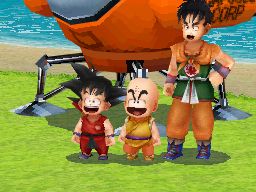 Krillin, Yamcha, Eighter, and Bulma expand the fighting list with their own various attacks; the most unique of which are Bulma and Eighter.  Bulma, as fans of the series may know, is far from any type of fighter but she makes up for this weakness by using firearms instead.  This change in style creates various unique experiences that help break up what could possibly have been a repetitive experience.

Considering repetitiveness, the player’s ability to tolerate these types of things will eventually determine how much they enjoy the experience.  The game has save points spread sporadically throughout longer levels, and none at all in smaller levels.  This leads to further troublesome problems when the fact of small environmental puzzles come into play. Sure these puzzles are not very elaborate and they also create a bit of extra enjoyment, playing through the same puzzle a few times becomes a draining experience.

The reason you may have to do this, is because since the game has oddly placed save points, you will occasionally fight a very difficult boss and be defeated, and if there was not a save point anywhere in the level you will literally have to play the entire level again to reach the boss one more time.  Rinse and repeat until defeated. 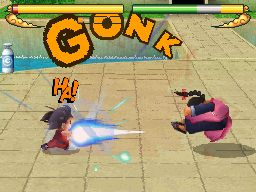 The amount of combat you will be doing on the other hand hardly becomes monotonous due to the fact that as you advance through the game you will learn new abilities and level up Goku’s character.  This, and the fact you can change your battle style to that with his signature power pole creates plenty of opportunities for enjoyment.

There is even a bit of co-op available in the game, that is played locally.  Plus a survival tower which places the player against bosses that must be defeated to advance further up the tower. Also a small feature included in the single player mode is the fact that you can collect various trophies during game play that act as collectibles.  Not a very huge feature but something to do if you happen to be a completionist.

Overall:
Despite an occasional feel that the game was a bit rushed in the level design, you will find a very rewarding experience from Dragon Ball Origins 2.  Fans of the Dragon Ball series will find everything they love and more from the story and the way it is told.  Combat is extremely satisfying, though the lack of continuous save points is frustrating. DBO2 ultimately results in an enjoyable experience with the occasional stutter in enjoyment due to poor save point placement and odd level design.

I give Dragon Ball Origins 2