Known perhaps best for their flash development, Nob Studios have attempted to evolve with their latest title, Dragon Evolution. The title is a unique take the casual game formula of side-scrolling run-and-attack games, moving past what seems to be simplistic controls, to create a distinctive and enjoyable title for both the iPhone and iPad. 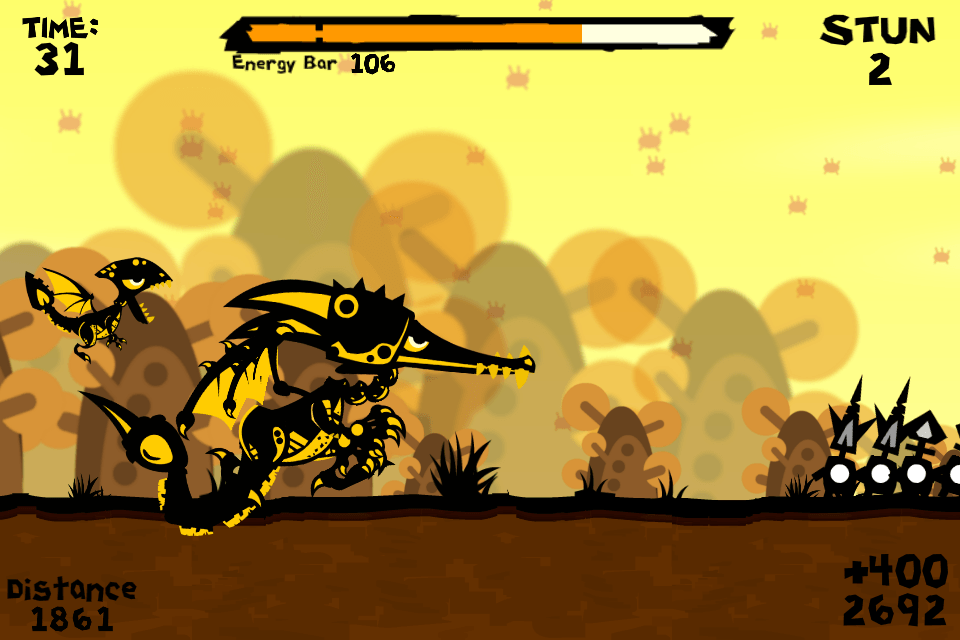 There isn’t a whole lot of story to Dragon Evolution. Evil tribes, for some reason, have stolen eggs from a dragon. The dragon has nine years to attempt to retrieve them back. The story gets played out in a little more detailed, but not often, with eggs being used as traps or being boiled by some rather gruesome looking bad guys. This doesn’t really add any motivation to the game, the dragon moves of its own accord. However, it is interesting to gain little bits of extra insight into the story, and the read them in whatever way you see fight. 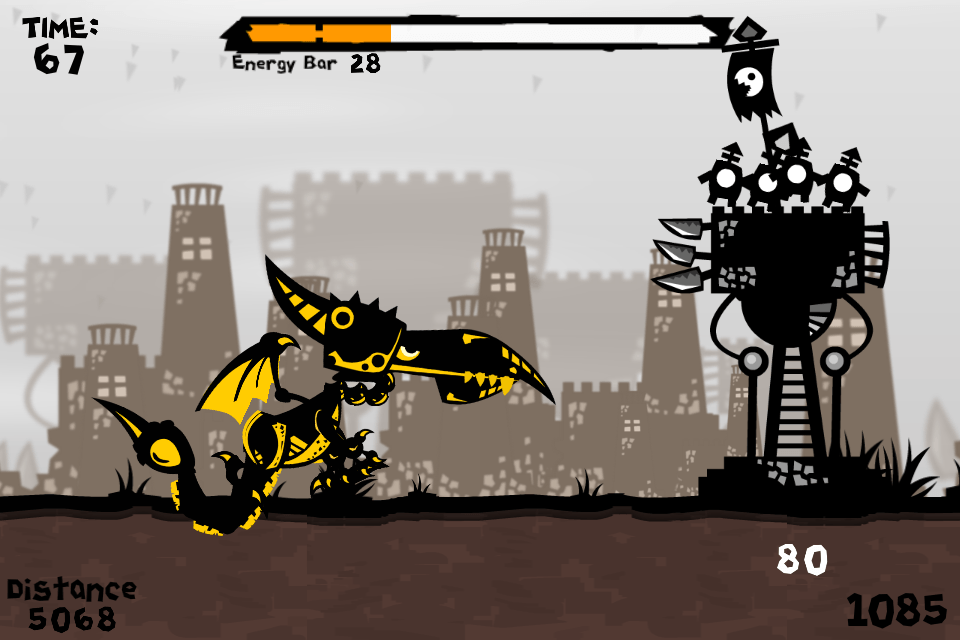 Dragon Evolution has a simplistic gameplay that clearly borrows from Nob Studios experience with flash development. The actual control of attacks is simple to pick up, tapping on the right will cause a special attack, tapping on the left will cause a strong physical attack, and tapping (and holding) both sides at once will bring the dragon up into the air. The rest of the game in automatic, and has a lot to do with the evolutionary choices the player makes. The dragon will run its course on its own, and bite any tribal enemies that get in its way. Attacks against the dragon will deplete its energy, as will the use of any special abilities. The overall goal of the game is slight ambiguous. Being an arcade game, it all comes down to the final score, but the means in which the score is generated can be a little confusing. Regardless, it is still fun to watch your creation running across 9 unique worlds, laying waste to all in their path.

Although the control input may be simple to learn, there is a skill to the RPG style elements of the game. Dragon Evolution takes place across nine in-game years, with each year beginning when the timer runs out. Timers can be extended by making it through one world, but this becomes harder and harder the future into the game you progress. Each year takes you back to an evolution menu, where you can select abilities that will dictate the dragon’s strengths, weakness, skills, special abilities and appearance. This is a rather fun feature that really makes the game unique. The only downside is that once you complete your nine years, and the dragon is fully formed, you can’t export or share your creation with others. 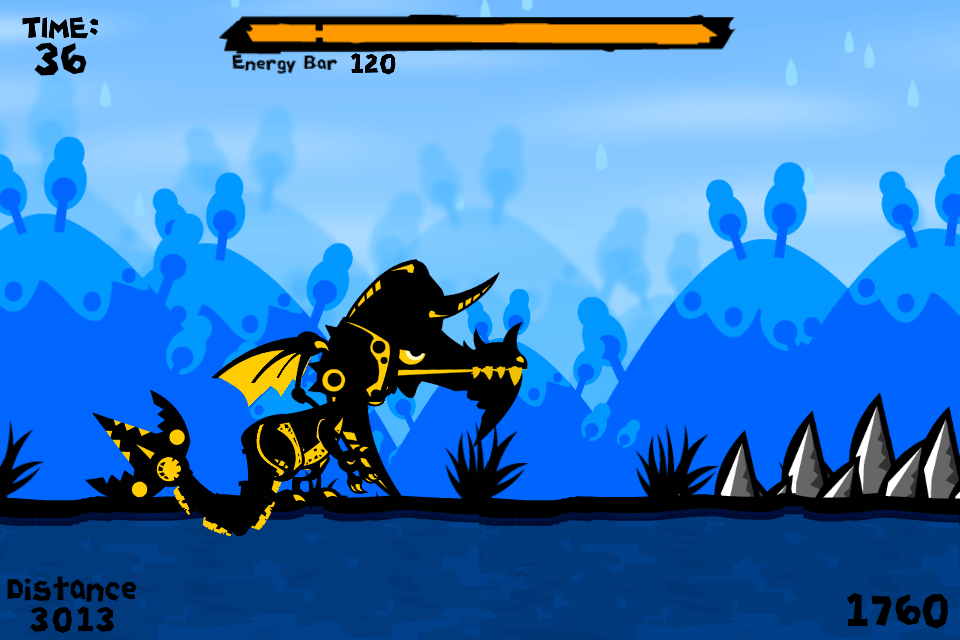 The unique worlds are particularly fun. Each has their own theme, with enemies to suit the conditions of the world. Multiple types of enemies, with distinctive designs only add more to the games overall detail. The colours and level designs are all crafted with that charming hand drawn ‘flash’ game design look, which is very enjoyable. The silhouette style characters, both enemies and your dragon, really pop against the vivid colours of the games multiple thematic worlds. The audio at times can feel misplaced, with sound effects often being too comical for the theme of the game. It does add to the overall fun, but can take away from the theme of the game at times. 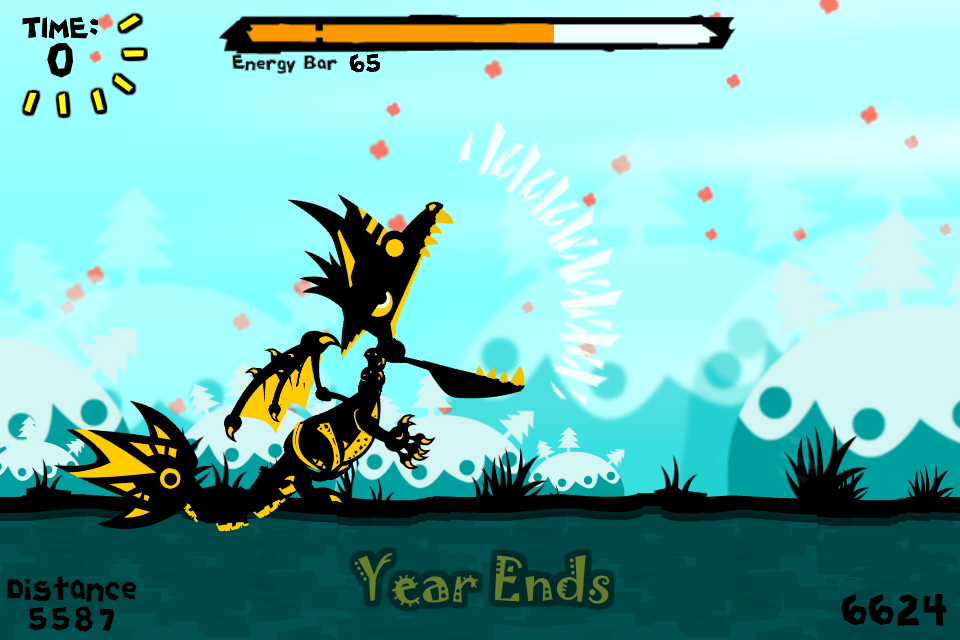 Dragon Evolution is a fun casual game. The simple mechanics, which at times can be very similar to Jetpack Joyride, make it an easy to pick-up-and-play game. The integration of RPG elements makes the game stand out amongst the dozens and dozens of casual games. This coupled with the way the dragon changes based on the fusing of different evolutionary elements, means that every time you play Dragon Evolution, it is a new and visually impressive take on an all too familiar genre. Although this review is for the iPhone version, the control system would be great for the iPad, not to mention the benefits the large screen would have for the charming, hand drawn graphics Dragon Evolution has to offer.