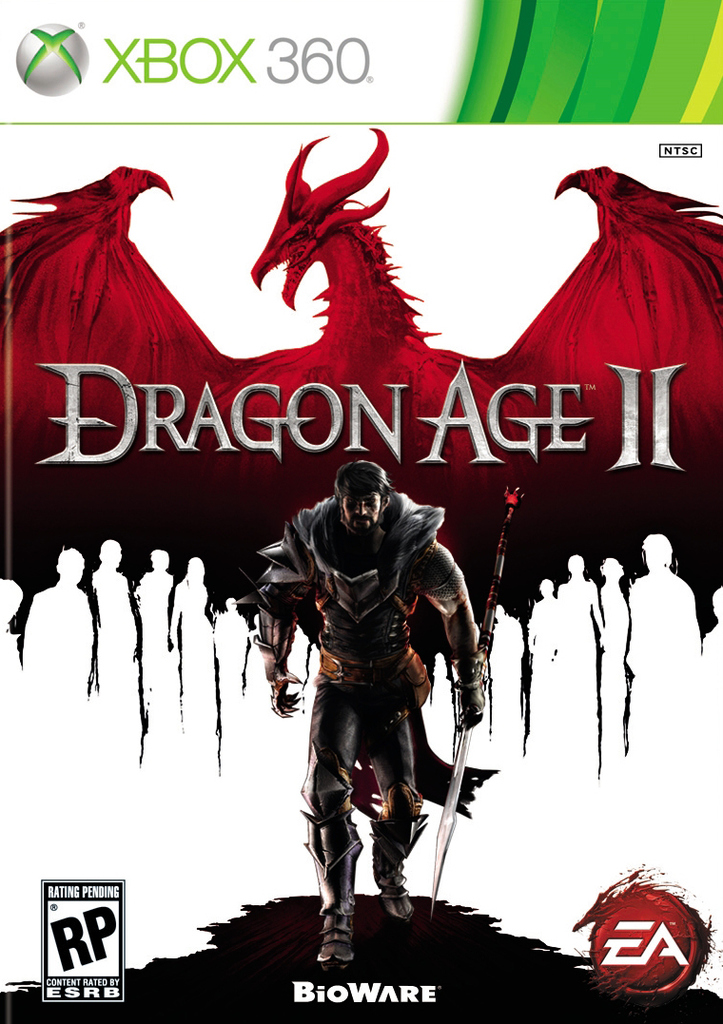 Overview:
Barely more than a year ago BioWare released one of the most stunning fantasy RPGs to in recent memory that spanned across every console you can think of, minus the Wii of course. Dragon Age: Origins stood as a monolith to how far the industry had come with the RPG franchise and received countless add-ons throughout the next year. Now BioWare has released Dragon Age II with some simplifications to the overall formula. Coming out in under a year and a half after the first game, how does Dragon Age II stand on its own?

Story:
Dragon Age II begins with a soon to be found ally Varric being dragged into an interrogation situation and told to tell his captors everything he knows about The Champion, because through all of the legends and lies spun into tales, his captors need to know the truth. As the story unfolds players take the role of Hawke who is a woman or man depending on the players choosing.

Hawke is a young refugee trying to avoid the Blight alongside her family members and to do so they must escape out of Ferelden and make it to Kirkwall which is a large fortress city in the Free Marches. This places the story’s beginning shortly after the original events that began in Dragon Age: Origins., however through a handful of time skips places the timeline past Origins ending.

The story takes place almost entirely inside of Kirkwall itself and involves heavily the various members of your party that you soon acquire within your first year inside of Kirkwall. These stories are developed to help flesh out the characters and truly make you feel for the members of your party, in more ways than one considering the romance factor returns in Dragon Age II as well. 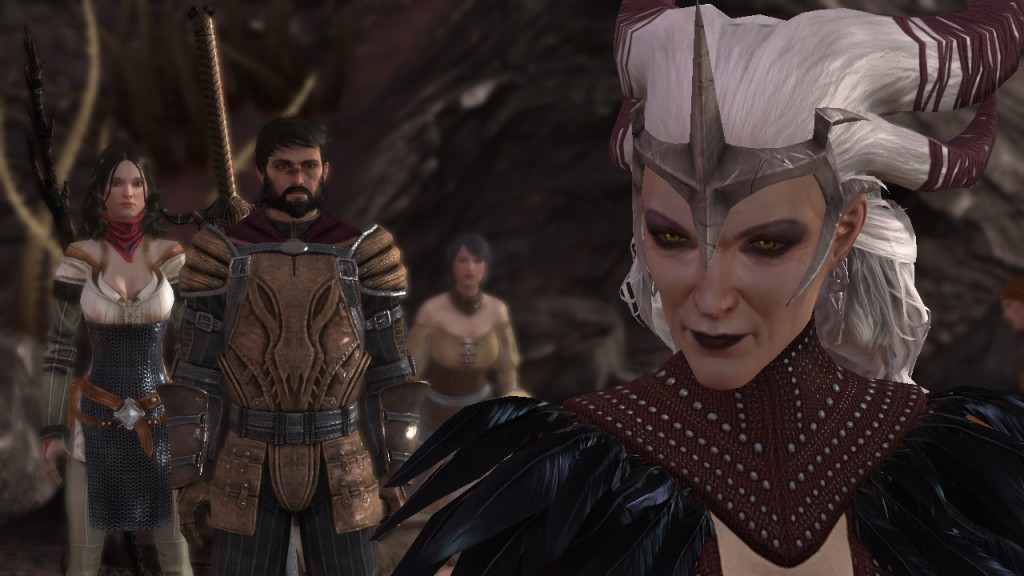 Players can do a number of quests stemming directly from their companions to help build relationships with them and find out more about their troubled pasts. The inclusion of the character specific quests is a nice addition to help flesh out the human side of all of the characters that eventually join Hawke in her rise to power. Alongside her companions Hawke will not only have to face political turmoil as the Qunari become stranded in Kirkwall and the constant fighting between the Apostate mages and the Templars that think of mages as ticking time bombs.

The storyline of Dragon Age II becomes extremely fleshed out and can leave players spending plenty of hours exploring every optional side quest they may find and also finding out the pasts of their companions while they choose whom to romance, which is nearly every companion in your party regardless of your Hawke’s gender.

The choice system returns for DAII and it plays a more evident role than previously seen in any game featuring Bioware’s decision based story development. Through a number of time skips between Acts the player’s choices make plenty of changes to the world around them and shape exactly what kind of person their Hawke will be. This makes it so that despite the fact that you have played through twice already, selecting different choices can always lead to a new experience.

There are a few quests that are added in however that feel added in and out of place and these involve Hawke and party finding a various item in a dungeon or enemy and receiving a quest instantly involving that item. Though rather than receive any explanation for the item or why it was there, the player must simply take the item back to its owner and receive a bit of money and XP making them nothing more than lost and found quests.

Graphics & Performance:
Dragon Age II certainly takes a step up as far as the visual aspect goes because the amount of detail that goes into the game’s environments and characters certainly is an improvement over the first game. The facial expressions and body actions of the characters in the dialogue scenes is truly something to witness, especially when you put the steadfast Aveline together with the loose morale’d Isabella. Enemy blood splatters your character similar to the first DA game but it has been improved further, if you are right in the midst of the brutality your character will appear splotched in blood, or only have a few spatters if you were on the outside of the fight. 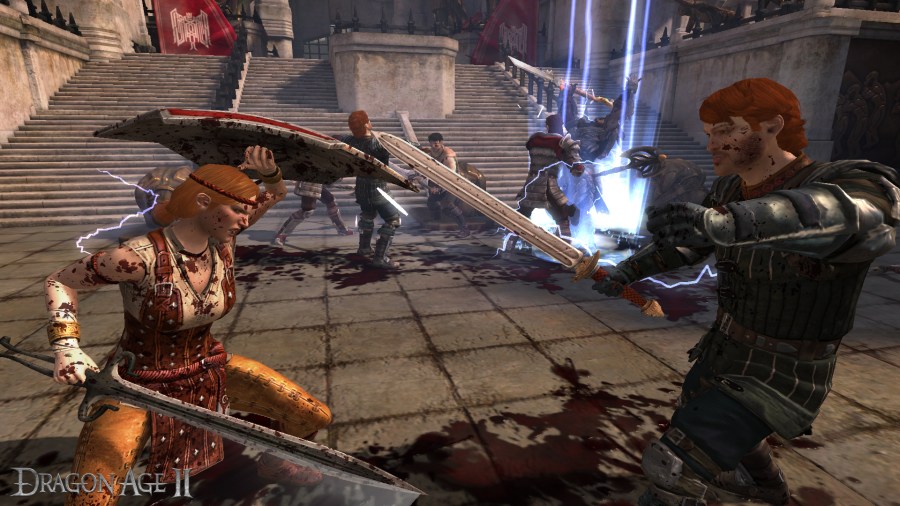 Every environment you explore is richly detailed and has plenty to see and experience, even after going to the same area many times over. Which is unfortunately something that you will experience almost time and time again. It is certainly disappointing originally to find out that despite a certain story based quest that the majority of the game will take place in Kirkwall’s various districts and only a couple of places outside of its walls.

This is already further disappointing when you add in the fact that the amount of recycled dungeon design is blatantly obvious and hidden extremely poorly. The number of different dungeon environments can almost be counted on one hand and are re-used time and time again. The only way that Bioware broke up the repetitiveness is by adding in unopenable doors and placing them in certain areas of the dungeon that they decided not to include in that specific “dungeon.” This would be something that could fool players if only it wasn’t for the fact that the mini-map shows that the player can go through that way originally and show the exact room shapes on the map itself.

That is of course when the actual visuals don’t fail on their own regard. A number of times my character froze into a specific action and would not move her upper body in the slightest, only twitching to attack an enemy. This carried over into cutscenes which actually became humorous due to the fact that a normally serious scene was ruined due to Hawke’s open arms and twitching face. This includes another game freezing failure in the graphics near the end of the game where all of the characters in a cutscene had no bodies and were simply floating heads with swords on a blue backdrop which persisted until the game froze itself.

Audio:
The musical score handled by Inon Zur is truly a pleasure to the ears and will match the events occurring on screen perfectly. The music itself is what one would come to expect from a fantasy RPG but contains some memorable pieces courtesy of the orchestra as they follow Inon Zur’s instruction. 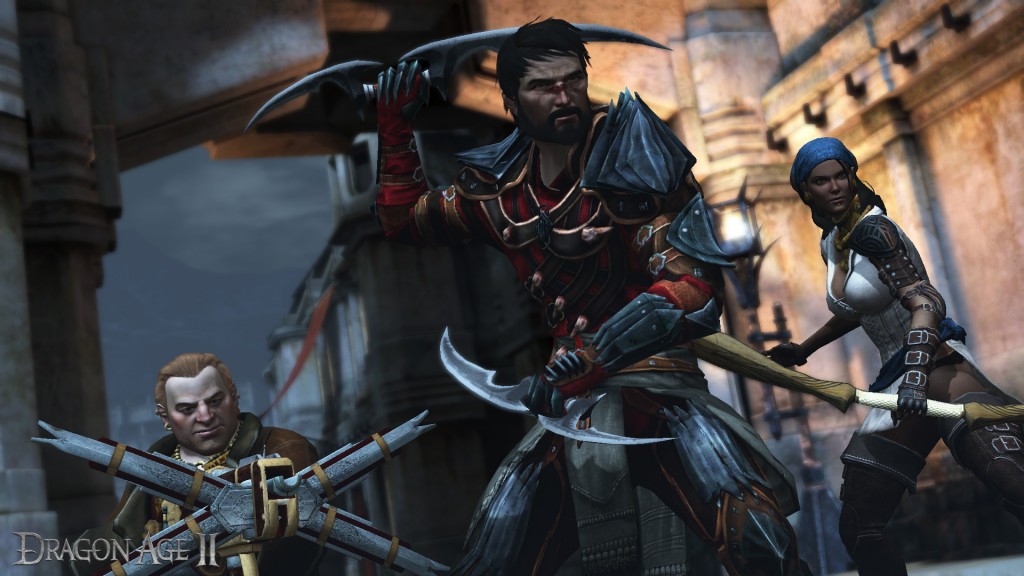 Character’s themselves sound absolutely amazing and it is a necessity considering everything in the game is voiced, whether it be Hawke or her companions’ side comments to the main action happening right in front of you. The voicework done by the actors is truly something to find pleasure in with the way they not only accurately portray the emotion given from their dialogue but enhance it. When combined with the already well done body language in dialogue sequences it makes talking to everyone the highlight of the game.

Gameplay:
In an effort to make the game perhaps more accessible, or perhaps more streamlined Dragon Age II will appear as an entirely different beast from Origins as far as combat is concerned. Combat has been simplified and made much more simple to access at first, through allowing players to map attacks and “sustained modes” to the X, Y, B button while A performs the standard brutality that your selected class can choose.

The fact that the combat has been made so fluid makes it so that despite all of the battles you face each one can be handled with skill with everything at your fingertips. Though some may see this change away from an RPG and more to a button mashing hack’n slash it side steps this by allowing players to temporarily pause the action on screen by opening up a command wheel to either quickly use healing items or mana/stamina potions.  Also in this mode players are able to access all of their abilities and give commands to their companions in battle by switching to them directly in the command mode.

Players will be able to choose from a warrior, a rogue, or a mage and depending on what they choose obviously brings about how their character will be able to take the fight to the enemies. Players grow their skills and abilities through your standard leveling process and are able to distribute points into your standard RPG attributes: strength, dexterity, willpower, cunning, magic and constitution.

Exactly what these statistics due though depends on which class you picked originally. While a warrior gains attack power from strength, a rogue does so via dexterity.  Everything your statistics change is shown right on the leveling up screen which makes choosing your character’s growth much easier. After your points are distributed you are taken to a skill tree sets which will determine how exactly your fighter grows. 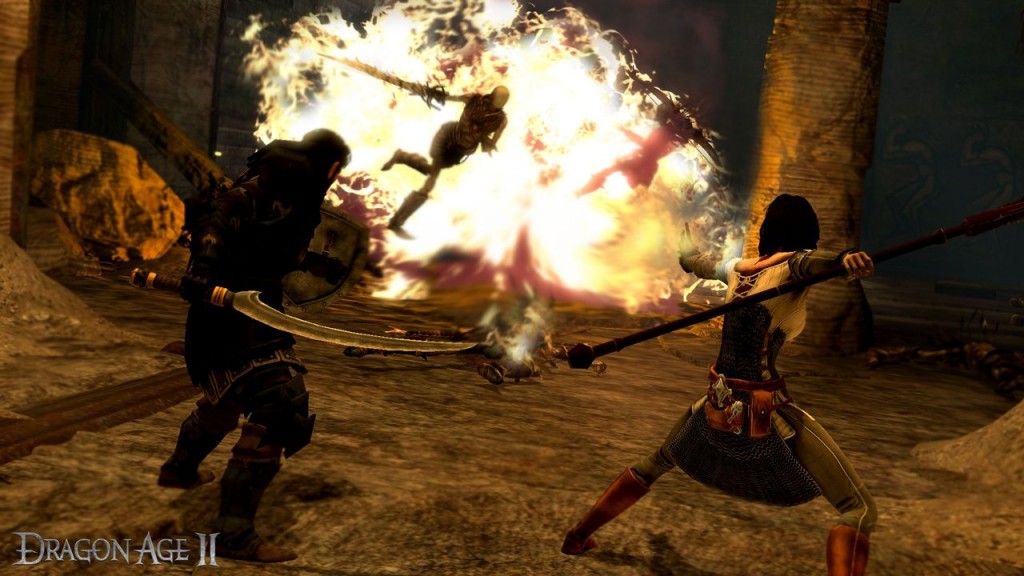 There are a number of different skill trees to pick from and of course, not enough levels to fill each of them up. This means that you may be able to focus your attention on being an element using mage, or use spirit magic at will. All of these character creation and growth options help to secure the fact that Dragon Age II can be replayed a number of times without having too much of the same experience.

Of course combat isn’t the only thing that has been changed. Interacting between characters was always a highlight in DA: O and it has also been further streamlined for DAII. Characters choose their choices through a dialogue wheel which will have specific images which signify just what category of response your choice will be in. Whether it be diplomatic, joking, brutal or something else entirely is all shown through the images in the wheel. Though it is more or less obvious which is good and bad, your Hawke will start to develop certain personality quirks depending on what options you choose. Being brutal enough with your allies will allow Hawke to choose rash actions and be cruel in the face of adversity, all the while building up Rivalry points with her companions.

There are a number of glitches however that were experienced in actual gameplay which can be seen as game breaking as well. Whether it be related to Aveline’s ability to grow her armor statistic to an unimaginable number, level up infinitely, or have a story critical enemy spawn on the outside of the level’s geometry forcing the player to reload a save it is obvious that Dragon Age II needs a patch desperately.

Overall:
Dragon Age II has surfaced again with yet another captivating storyline of a refugee’s rise from the ashes to being a Champion. With streamlined combat, interaction between characters and plenty of side quests to help pass the time Dragon Age II can be played through many times over considering the choice system’s effects on the story are more immediately felt than before. But with a number of bugs that break up gameplay and scenery that is way too familiar it is obvious that Dragon Age II needed just a little bit more time in the oven before being released to the public. Hopefully patches will be on the way that will help resolve some of the more staggering graphical and gameplay bugs that were mentioned.