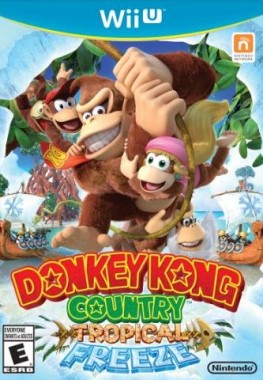 Overview
Its crazy to think that it has already been a few years since Donkey Kong last appeared on consoles, as the Wii release of Donkey Kong Country Returns is still a modern favorite for fans everywhere. While good however, many complained about minor issues from Retro’s new imagining, such as the increase in difficulty and the lack of a smaller, playable Kong for single player – among other minor issues compared to the triumph that Rare worked on twenty years ago. Donkey Kong Country: Tropical Freeze brings back our Kong in true form, along with Diddy, Dixie, and Cranky. Is this new world and old faces enough to keep us after that coveted banana hoard, or was the rebirth of this franchise a one-shot victory? Let’s find out.

Story
Penguin vikings, angry walruses, and other themed animals make up the set of foes that we’re up against this time within Tropical Freeze. Fitting, right? While Donkey Kong is celebrating a big birthday bonanza with his buds, the dastardly Snowmads freeze the seas surrounding this familiar isle and are now attempting to take it all for themselves. Now with more allies such as Dixie and Cranky Kong (as well as a decent number of other monkeys), DK quickly sets out to save his paradise yet again from certain danger. 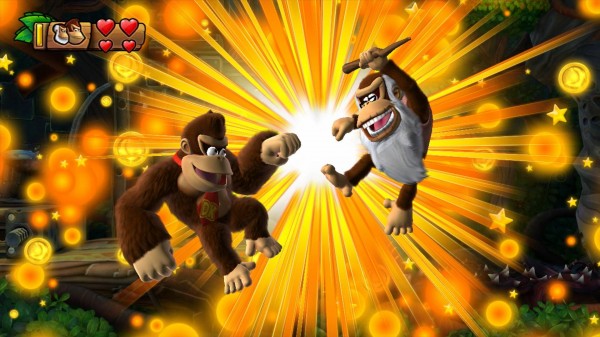 Sure, we don’t get the classic enemies that made the series famous, but this isn’t that series. It took me a while actually to get it out of my own head that Retro Studios were not Rare. They run this show now, and while I feel that the characters lack a bit of that old Rare charm, there is a lot to appreciate within Tropical Freeze and a great deal of humor folded underneath the story to keep a smile on your face until the end of the journey. It may look like a similar product for nostalgia’s sake, but Tropical Freeze relies on happy pigs, flabbergasted bosses, and cheeky animations to get its story told, and I can easily say that I enjoyed this thin yet charming narrative more for it as a whole. Rare did this same style, but Retro’s own direction is also satisfying – even if there are no goofy beavers to chuckle at.

Gameplay
To be honest, I wanted to say that there were a ton of new tricks in this Kong’s bag. I wanted to say that we had a lot of change in this sequel, and players would be blown away. Sadly, when it comes to gameplay – there isn’t a big difference from this title and Donkey Kong Country Returns. The platforming is still as smooth as ever, with Donkey Kong being the star of the show as we go through a decent sized set of varied locales. The Gamepad doesn’t really come into play too much aside from its comfort level (which is a well suited replacement for the Wiimote). Its the same solid structure and polish we have come to expect from Retro Studios, who in this case have merely expanded on their vision for Donkey Kong, rather than adding in gimmicks just for the sake of it. 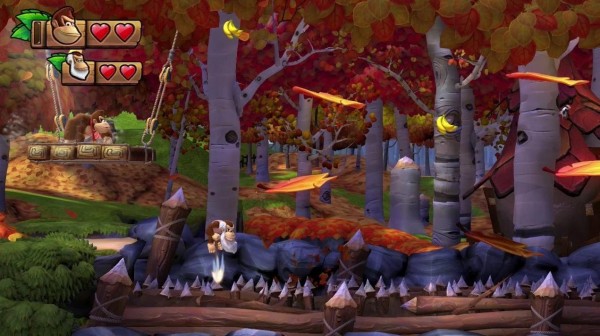 The biggest and most obvious change are the new companions that DK can use as tools to get around during single player. Cranky, Dixie, and the returning Diddy can ride on your back and with the tap of a button, lend their assistance to nearly any situation. Dixie returns with her trademark hair-propeller, which is able to slap enemies and send Donkey Kong up in the air and across short gaps. Now, it is much more limited than the last time we seen it as the spin doesn’t last all too long, but with the added ability of a boost jump, it still fits in nicely with the level design here. Cranky is a bit of a mixed bag as he comes with a cane that can allow safe traverse on spikes and a good pounce that can get DK up to higher platforms more effectively. While this technique does work, it takes a good amount of practice to perfect, as unlike the more forgiving Duck Tales – this cane requires a lot of precise timing to land without error. Diddy…well, he’s Diddy, still equipped with his jet-pack and like the other two Kongs, is able to jump on DK and roll over enemies. 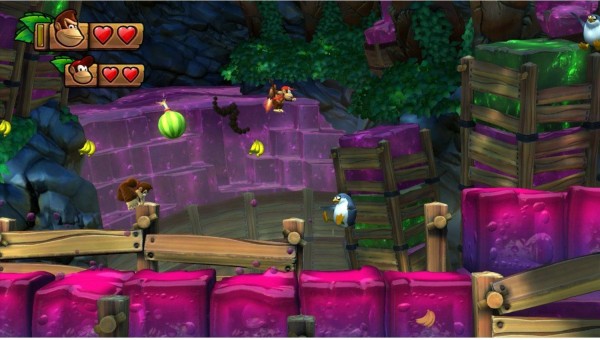 I already mentioned the solid platforming, but I feel I should at least go the extra mile to explain how enjoyable these new environments are. Don’t be fooled by the name, as there are more than tropical and icy environments here, both of which by the way feature some fantastic interactivity, such as the slick icy spots and hanging vines that are tossed in – just to make the already tough challenge feel at least fitting. In-between those however you have some brilliant portions involving good ol’ Rambi, mine carts, and blast barrels. To give things a boost in the visuals department as well as the gameplay, the camera angles now travel with you as you blast through barrels, allowing for a much more thrilling (and easy on the eyes) ride through the air. I still have to say that I am not a fan of the vines within Tropical Freeze, as having to hit a button takes away a lot of that free-flowing feeling we got from the older titles, and due to this franchise still bearing the same name, I’d say that is an important element to get right. Swimming stages have also returned, and are….ok. Don’t get me wrong, adding in underwater attacks is fine and even DK’s graceful spinning attack fits the bill, but the introduction of swimming without dodging only comes across as awkward at first, and doesn’t really manage to capture that relaxing essence of the classics. 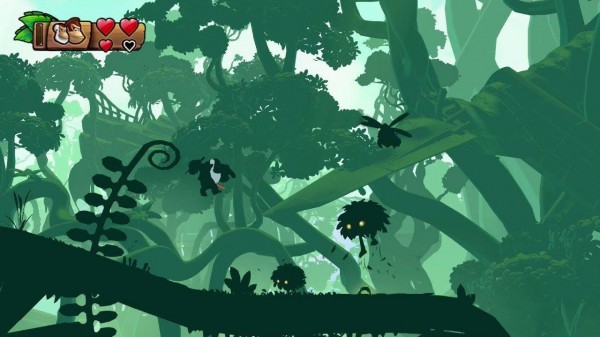 Out of everything, the boss battles make for the sweet icing on this layered cake. Each boss battle features some amazing sequences that utilize the controls and buddy gimmickry well, while still feeling like a giant helping of satisfaction – as if all of that work you put in up to that point just paid off completely. I will say it does take far too many hits to take down a boss, but it shouldn’t come as too surprising as most Donkey Kong titles have had fairly resistant boss battles – and Tropical Freeze means no harm by simply upping the ante. Multiplayer is still co-op, with one player taking control of the Kong on your back. It is great fun to play as Dixie, Diddy, and Cranky, and I really hope that they can resume some tag teaming WITH Donkey Kong in the future, as that element of single player teamwork is kind of what made the past entries tick. 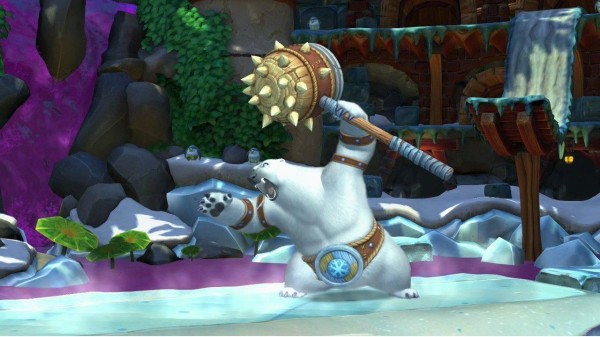 Visuals
This is the Wii U and Retro Studios have went wild with color in Donkey Kong Country: Tropical Freeze, making for one of the most beautiful games on the platform. If color wasn’t enough, we also have a great deal of detail. You can now see individual eyelashes on Dixie, fine hairs on all of the apes, and the textures on all of the plants and fauna. This sounds small, but in this large world that finally features more dynamic camera angles, the atmosphere is easy to absorb and enjoy while facing the many challenges within. Character models themselves are fine, but again – the enemies seem to have come from a Pixar cartoon, rather than out of Donkey Kong’s universe. It sounds trivial, but with all of the enemies, sights, and species we seen in the SNES installments, can we be a little more creative than what looks like it was taken from a Madagascar short? 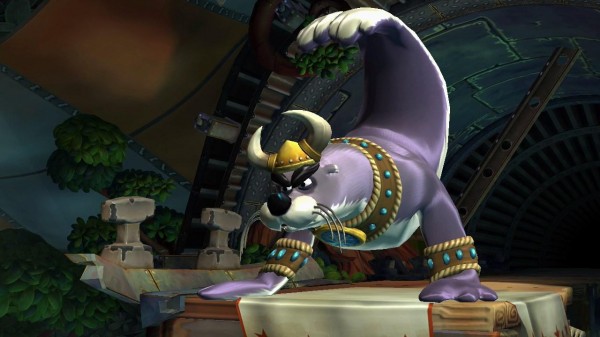 Audio
The soundtrack within Tropical Freeze is masterful. While it does sometimes rely on remixed versions of classic experiences, the boss music turns each of the main fights into a true spectacle. Beastly rock melodies, soft ambient tunes, and more set the stage here and while the game itself doesn’t do a lot to separate itself from its predecessor, the music does so in many ways that breathe new air into DK yet again. I can easily tell you which stage is which in Tropical Freeze based upon the OST alone, and when a player can pick up on that, you have something truly special. The sound effects are also well done, but nothing too outside of what we have seen before aside from Dixie Kong’s haunting yet hilarious scream as she meets her demise.

Overall
Donkey Kong Country: Tropical Freeze comes at us with a bit more of what we loved on the Wii and shinier visuals, but the experience still feels about the same. Sure, Retro spent a lot of time creating a gorgeous world to explore and the gameplay is still top-notch, but its as if the game is fighting a battle between nostalgia and fresh elements, being jerked from one direction to the next – with no compromise ever coming to fruition. With that said, this is still an experience that must be had to all Wii U owners – as the variation, boss encounters, and little pokes and jabs of humor are sure to get an entire new generation on their feet for the Kong that deserves to be back on top. Tropical Freeze won’t shock and awe a lot of us, but it does fit the bill to carry on the legacy of Nintendo’s fur-covered favorite.