Doctor Who is a cult-British science fiction programme that has spanned over generations like none other, starting in 1963 with a bunch of cheap sets and low-budget special effects. It soon became famous for making transitions between actors, dubbing them “regenerations”, which was a clever way swapping actors whilst fitting in with the story at the same time. The television series had some downtime as it ceased to be produced in the 90’s, but a recent revival in 2005 summoned a new era for Doctor Who, allowing it to be enjoyed by a brand new generation of children and adults alike. Since its rebirth, the series has already undergone some changes, eating its way through two different actors playing the Doctor including their female counterparts, moving on to the latest incarnation of Doctor Who, played by Matt Smith with his damsel in distress turned sidekick being played by Karen Gillan. However, as Doctor Who is produced by the BBC (British Broadcasting Corporation), it only has a small following outside the United Kingdom, so it is unlikely that this title will be released outside of the UK/Europe.

Doctor Who: Return to Earth is set in the current Doctor Who era featuring Matt Smith as the Doctor, and Karen Gillan as Amy Pond. The game reflects this through a story based on these two characters, as well as the actor lending their physical likenesses to the in-game, as well as their acting talent. Yes, you heard right, the actors actually did the voice recording for their characters. The fact that Asylum Entertainment managed to land the actors in person is an impressive feat when compared with other games based on cinema or TV, most of which usually have to settle for sound-alikes or worse. To top it off, Doctor Who: Return to Earth even boasts of a “brand new official storyline” written by Oli Smith, a scriptwriter who has had previous involvement with the Doctor Who universe, before writing the plot of this game. 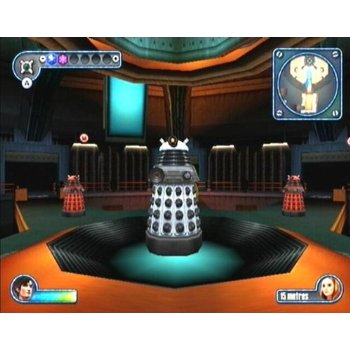 The story sees you board an odd space ship called the SS Lucy Gray after the pair of time travellers discover a peculiar signal being emitted from somewhere near the edge of the solar system. Materialising on the human colony spaceship, he notes that this is the first colony ship to return to Earth after the solar storms. But everything’s a little too quiet for his liking, and he soon finds out the ship has been commandeered and overrun by Cybermen, as well as a number of other instantly recognisable Doctor Who enemies, such as the infamous Daleks, which for those who haven’t laid eyes on the world of Doctor Who before, resemble wheelie-bins with arms, guns and some bobbled armour plating. The plot is a blatant attempt to cram in all the enemies from the series, and some of the voice-acting performances are a little stiff, which we can just about forgive considering they are supposed to be playing robots.

Still, it all sounds fairly promising so far: actors from the show doing the voice-acting and a fully-fledged, brand new official storyline. Well, it’s all downhill from here. Upon starting up the game, you are greeted by the memorable, lovable menu music that is the Doctor Who theme tune, but as soon click new game, you are entering a world of pain. Although there are a number of save slots preventing argument over who gets to make a data, I’m not sure there would be too many arguments over who gets to play. The gameplay is dire and the visuals are an absolute travesty. Graphically, it looks last-gen, with washed up textures and poor character models. Also, the animation is awful, with no movement or expression in the characters’ static faces, and walking animations bordering on amusing just because they make it look like the character models are wearing trousers several sizes too small. 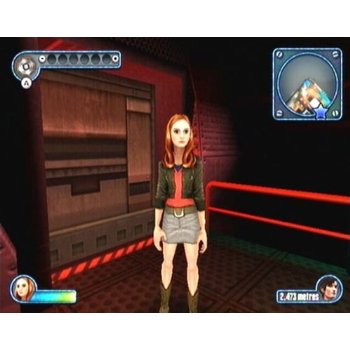 During the story you switch between control of the Doctor and Amy Pond depending on the level you are on. Firstly, the story plays out through a passage of play in command of the Doctor’s assistant, Amy Pond. Navigating through various obstacles, your efforts see you assist the Doctor land your collaborative mode of transport, the Tardis, and in turn, a mix of puzzle solving and platforming has you switch to the control of the Doctor. You swap control of the Doctor and Amy Pond regularly throughout the game, but other than physical changes, there is little differentiation between the two characters. Amy Pond even has a sonic screwdriver, one of the title’s slight inaccuracies considering that on the show, this gadget is reserved exclusively for the Doctors possession only. However, this isn’t a huge problem where most are concerned, and if anything, livens up the parts of the game spent playing as Amy Pond because using the sonic screwdriver is actually one of the highlights of the game. It makes good use of the Wii pointer mechanic, forcing you to hone in on the smiley face and shoot it with the appropriately coloured crystal. It all sounds very random, and that’s because it is. What it has to do with the Doctor Who universe, I don’t know, just appreciate that it is one element of the game that’s playable.

Another aspect of the game which isn’t too bad are the mini-games. These seem promising at first, and although they are badly explained -leaving you with no option but to figure it out for yourself by giving it a go- can be enjoyed to a certain extent. Unfortunately these too lose their appeal due to the fact that there is a grand total of two different types of mini-game: The Sonic Screwdriver Game and The Gravity Gun Game. This limited variation means the mini-games quickly become repetitive, further detracting from the already dismal experience. 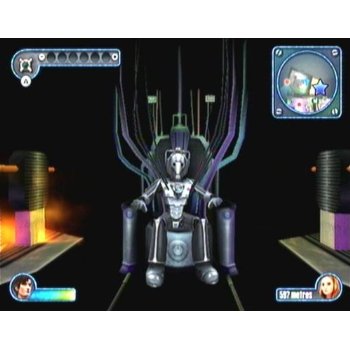 While there are no huge bugs or glitches in the game’s coding which inhibit the game’s flow, the gameplay is generally flawed, turning what should be a game aimed primarily at kids, into a frustratingly challenging game. I can empathise with the developers, as based on the context of the game and the subject matter of Doctor Who, there is an emphasis on non-violence, meaning you can’t kill the enemies. This suddenly turns an easy engineer robot with a strange motive to attack you into an invincible, unstoppable killing machine that will play havoc with you. You are left with no option but to evade the enemies using stealth, only to be killed when your back is turned as you try and make out your position on the HUD as you squint at the fuzzy mini-map.

Overall, Doctor Who: Return to Earth looks promising from the off as you hear of the in-game characters being voiced by their real-life counterparts, as well as official storyline to boot. The result is a complete flop. Perhaps it was meeting deadlines to capitalise on the Christmas sales boom, or perhaps it just goes to prove that TV tie-in games suffer from the same syndrome as movie tie-in games. Either way, it’s not a great game, with the high points being the parts that are distinctly average rather than being as unforgivably atrocious as most of it is. The flawed gameplay makes it inaccessible to most by upping the difficulty to near impossible levels, with only a handful of exceptions who get a kick out of overcoming absurdly difficult hurdles such as this able to get some enjoyment out of it. If you really must get your next Doctor Who fix then get the DS title, Doctor Who: Evacuation Earth. It may be set centuries earlier, but it’s light-years better than this.