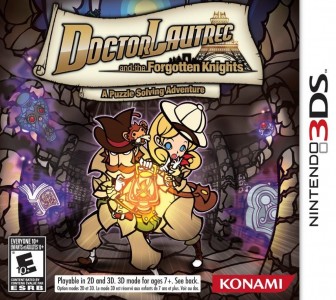 Overview
When you first look at Konami’s Doctor Lautrec and the Forgotten Knights, a certain polite professor comes to mind almost instantly. In all honesty though, both have very little in common aside from the usual puzzle elements tossed in. This game lets players explore a 19th-century Paris as the very intelligent and witty Doctor Lautrec, who is out to discover a once hidden treasure. So far on the 3DS, we have seen very few original IPs, so Lautrec’s first outing looked to be a promising one and looking back, there certainly is a lot offered here to make this adventurer and his bubbly sidekick stick out on the platform. So, how does this title perform on it’s own? Here is my review for Doctor Lautrec and the Forgotten Knights. 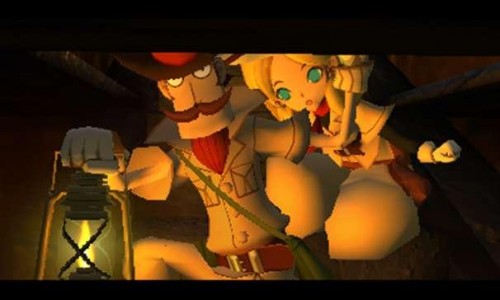 Story
If Doctor Lautrec has any silver lining, it has to be the story that has been pieced together for the player. For the most part, this plot is told through fully animated cutscenes with the main two characters being the bubbly yet smart sidekick, Sophie and the rather wise but stubborn Lautrec. This tale begins with Jean-Pierre Lautrec getting challenged to go after the missing treasure of Louis the XIV. You see, this clever chap is a bit arrogant, so any challenge he receives becomes a primal duty to achieve to prove that he is more than any simple “Adventurer” (a term that is a four letter world in his vocabulary). While this might be charming in most cases, I found it rather hard to actually like this Doctor as he constantly insults and demeans nearly every other character in the game due his famous history. Sophie on the other hand acts as a balance. Instead of being pompous and egotistical, this companion is genuine and caring, and it’s easy to love everything about her innocent nature.

As the game progresses, the player learns more about the many inhabitants of Paris they come across, tying together for one satisfying finish in the end with plenty of excitement and mystery found in-between. I even felt like the main two protagonists evolved a bit, as you learn enough about each to view them in a completely different way by the time the curtain falls. That being said though, the story as a whole can be a bit hard to follow as your constantly getting sidetracked by extra missions that do very little to add any depth to the main narrative. Most of these side quests are simple in execution, but feel as if their only point of existence is to lengthen the experience and prolong the journey to your ultimate goal. Even though the story is good, the game’s many distractions can make you quickly forget the main plotline and completely lose track of the core of just what Doctor Lautrec is truly about. 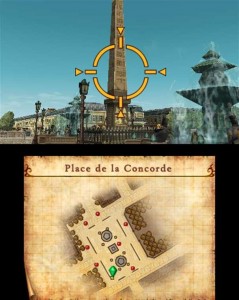 Gameplay
As for the The Forgotten Knights gameplay goes, it could be best said like the famous Facebook marital status, “It’s Complicated”. This is because there are three different methods mixed in, and the game switches between each at it’s own choosing. The first to talk about is the main dish, and that is of course the puzzles. Whether it be to just solve one at random or to discover a new doorway, there is always something new to decipher as you progress through the plot. If you remember, before Doctor Lautrec and the Forgotten Knights actually launched, a lot of the hype was built around the fact that there would be 250 in total. While that is true to an extent, most of the 250 are of the same type and differ in very minor ways from the next. Doing crosswords, seek and finds, and other simplistic romps are sadly the most we see in variation as well, leaving a lot to be desired. If you’ve played any Layton title, you will more than likely find the lack of imagination applied here to be a disappointment as a whole. Thankfully, the control methods used are all point, click and drag though, so if a younger or more in-experienced player is looking for something easily accessible, they should feel comfortable with Lautrec’s very low difficulty. 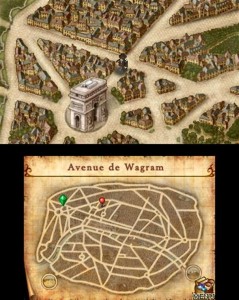 Next up comes the most interesting element, with that being the actual exploration. Whenever you need to get from point A to point B, you the take control of Lautrec himself and simply move from one destination to another with the D-pad. In certain areas, NPCs will be roaming the streets and can offer up side-quests to kill some time, but most just offer one line of dialogue and let you be on your merry way. This type of exploration can also be found in the dungeon segments, where Lautrec is hunting down treasures. Instead of just walking up to a find and snagging it, the player must traverse the level carefully as guards are on watch. Yes, this is a full stealth-oriented mission and works exactly the way it should, but a bit watered down in comparison with the major contenders of the genre as the pathways are pretty straight-forward.

Oddly enough, Doctor Lautrec has a bit of a trick card up his sleeve. After exploring a dungeon, you are usually rewarded with a type of treasure that has a spirit inhabiting inside. Shortly after, this triggers a battle sequence and the player then must watch their spirits come to life to take out an opposing foe in a turn based format. Sound familiar? Well, it should as from HP gauges to advantages, these mechanics feel ripped right out of the Pokeverse. It’s an interesting change of pace to do battle in this way, but there is very little explaination of why or how you are supposed to go about battling these spirits, and just finishing a match is usually the result of luck and trial and error. Even though these moments were out of place in such a title, I still wanted to see more to get a better idea of what was going on as the concept worked. By the end however, you will be happy to exit a spirit battle though as these moments are confusing, unfitting, and just a major miss all around. 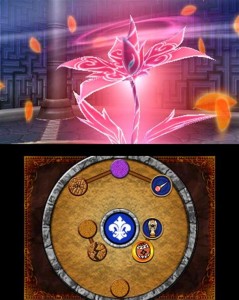 If you have the patience for it, Doctor Lautrec and the Forgotten Knights can easily last around 20 hours. The sad truth to that though is that even with the vast amount of puzzles and underground sequences, the whole game begins to reek of repetitiveness and the story is the only thing that truly changes after all of Lautrec’s cards are on the table.

Visuals/Audio
As far as the presentation goes, Doctor Lautrec almost feels like a AAA title. The cutscenes are crisp and easy to watch, the animation is fluent, and the colors and textures are bright and chipper. Much like the gameplay though, it feels as if the developers wanted to include too many ideas. One moment you will be viewing a 2D sequence, and the next you are then forced to play as the Doctor in what looks to have come out of an early N64 game. It’s a shame that the game’s lovely main art style wasn’t used at all times, but this crime isn’t game-breaking so most will be able to overlook the change in both environments and character models so often. 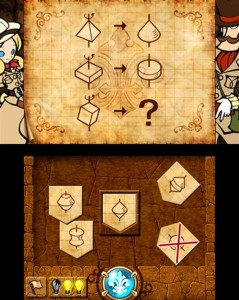 As far as the soundtrack goes, the music is well done and blends well into that classic Paris atmosphere. These tunes aren’t as charming and upbeat as the Layton series, but they work just well enough to at least capture the theme of the game. The true stars of the entire experience however are the voice actors. Nearly ever character is voiced and make this mystery feel exciting with each bringing a bit of spunk or emotion to any situation. To be honest, I hated Lautrec’s snotty character at first, but I really think that Konami were going for such a pompous personality to start with and his actor at least made him sound as arrogant as he appeared to be. If it was a good idea to use his character for a protagonist however is still very debatable.

Overall
Doctor Lautrec and the Forgotten Knights is a game that wants to do everything, but never manages to find itself in the process. Sure, the three types of gameplay work, but each feel shallow and dry, leading to a lot of lost potential in what still could be a great new property if executed correctly. There still is a charming cast of characters and some decent cutscenes that feed the player a somewhat entertaining plot, but aside from that, Lautrec feels more like a mix of clones that became unglued and then stapled back together. Doctor Lautrec and the Forgotten Knights wanted to be the next big IP for handhelds and it certainly makes an effort, but in the end, this box of treasure is one that is full of an array of mechanics that are disconnected and confusing, with a few shining moments sprinkled on top.