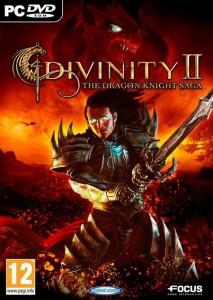 The Divinity series by Larian Studios is perhaps, at least in our own country, a rather unrepresented series of better than average role playing. Coming out of Belgium, Last years Divinity II suffered from poor porting on the XBOX and less than stellar reviews. The updated game of the year edition: Dragon Knight, hopes to address these issues while including the full expansion to boot. Can it rekindle our love of all things Dragons and high fantasy? Read on to find out 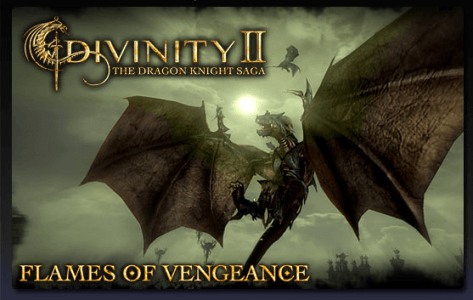 Although pitched as an updated version of the original with “improved graphics” new quests and the addition of the Flames of Vengeance expansion DII:tDKs for all intents and purposes is just a game of the year edition, almost exactly one year after the first launch. This should be fair warning for anyone who has already tried the game, but also signals the definitive version of said game.

Although obstinately European through and through, Larian studios have put their own style to a stock standard RPG classic, coupled with some exceptionally beautiful Enya style music and art. The premise is simple: Playing as a Dragon Slayer, you will invariably meet one of the last slayer of Dragons who in turn, can become a Dragon themselves. From here the plot changes as you yourself, inherit the mantle of the Dragon and can actually change at will into Dragon form and fly around doing damage and generally shooting things (with your mouth!)

Starting as a male or female, there are some neat initiations into the Dragon slaying way; where you can pick a class of Fighter, Archer or Magic and then from there gain uber-special magic silver eyes so everyone knows you are ‘the chosen one’.Oh and you can read minds.

All your thoughts are belong to us

Clich’e’s aside, Larian Studios constantly surprises with unique features that keep you wanting to play, until you remember why you stopped playing the first time and give up. One such device is mind reading, which really needs to be used in more games, more often. Character dialogue and talking is normal enough, with choices and a lot of text to read through, but on top you can “mind read” the person in front of you at the expense of XP. This actually creates a neat balancing mechanic whereby you won’t level up too quickly by mind reading, although you receive XP for pulling it of anyway. Peoples thoughts will basically tell you about a quest/ give you clues or generally point out how to exploit them for cheaper prices at stores or a better relationships. Harder characters may reject the mind read and turn you away and some simply won’t have anything interesting to say at all.

By and large this unique feature is the most fun to exploit in the game and probably what sets Divintiy II out from any other role playing game. In all fairness, the initial quests are boring with a lot of poorly animated characters and text to read. A lot of the quests are still fetch quests and until you actually gain the power to be a dragon, it can become repetitive, with uninspired moves and cheesy characters. Certainly the townsfolk have a cute, European quality to them with comical side quests and some funny situations, but where Dragon Knight fails is the mix of all the different elements.

Becoming a Dragon more or less loses all the progression you have put into building your character and takes the game from a reasonable RPG to an ‘action-adventure’ stance of flying and maiming victims in a very linear fashion. The whole world of Arcania is a little bit steam punk with a lot of high fantasy thrown in, but the flying steam ships and Dragons are at odds with the castles and knights on the ground. Expanding the story through The Dragon Knight Saga with Flames of Vengeance, adds more quests with an overall darker tone and setting, starting off in a flaming village under siege, but does not address any issues with the previous game, except to make it more action focused.

You are not able to import your previous character from Divinity II:Ego Draconis into the expansion (from what we could tell, unless perhaps when you finally finish it) which is a small issue, but one we have certainly come to expect. Instead playing as a higher level character you are left with a lot of questions and only a little time to solve them.

Poor animations for fighting and running, means that production-wise in many ways, Divinity II feels like an MMORPG, in the sense that we don’t expect exceptional graphics or animations, and yet it is not. There is no online and no co-op or even party system and while there is a fair amount of upgrades, magic and armours to collect/ it is nothing we haven’t seen before. The game is quirky enough that players will at least want to try it once, especially for the understated features of becoming a unique dragon form character that reflects the type of personality you have chosen, unfortunately it is a grind getting to that point, with only a moderate change in physics, graphics and animations 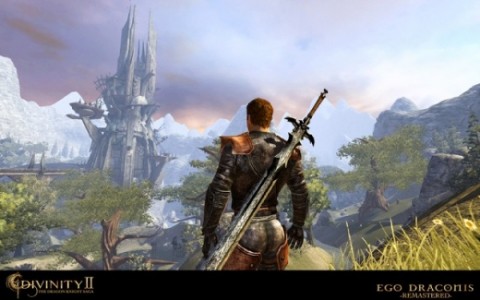 Visiting the websites for either Divinity II: Ego Draconis or The Dragon Knight Saga, will tell you everything you need to know about the game: one is light and bright and very gentle, while the other tries to be dark more serious and dangerous with lots of floating ‘islands’. Flames of Vengeance is certainly a fitting ending to the story, with a more epic premise and with 100+hours of gameplay in total, this is nothing to be sneezed at, and yet it will be surprising if anyone actually gets to see the end with gameplay and graphics that are all together, last gen.

There seems to be a misnomer, in Larians’ marketing department, where most of their material sports the “brand new graphics engine” motif. No Larian, you did not re-make the game with a whole new engine, nor did you break down the game and re-build it from the ground up. Flames of Vengeance testifies to this as you can download it even if you own Divinity II: Ego Draconis and the graphics will be patched.

If you did play it last year, eyes will be greeted with some enhanced cloth physics, slightly better character animation up close that isn’t so jerky, improved lyp syncing and some tweaked water and lighting. Nothing that shouldn’t already be there. On top of which up close the dialogue still doesn’t match the faces with characters that madly wave their arms in the air. Running around is floaty at best with the only defence a swift roll to the left. Rolling around is comical, and undercuts any proper mechanic of blocking of avoiding damage with enemies that run right at you.

For better or for worse

Last year, Divinity II was played on the XBOX 360, this year the same game on the PC through Steam. The differences are as expected. On the PC graphics are sharper and cleaner with a slightly washed out colour pallets and well defined shadows.

The consoles excel at richer colours, depending in the TV and special effects like blurs and lighting glows but sometimes saturated textures and not as good shadow.

The net result is certainly that Divinity II should be played as it was made: for the PC. This is the preferred method of input anyway for navigating the menus and gameplay, although controlling the dragon smacks of accommodating console controllers. Sadly, the XBOX controller is not supported in the PC version but all in all stands out next to other RPG and MMO as a mixed bag, that never quite gains control of the sum of it’s parts. 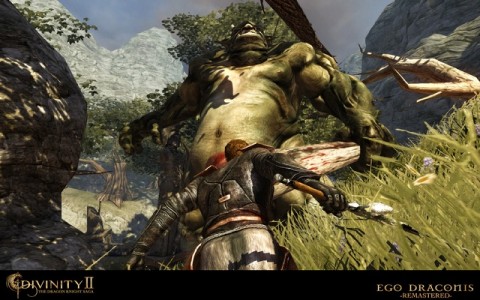 As a personal aside: It was the music of Ego Draconis (not to mention the name) that first drew me in late last year.

A lot of the music can be heard through the website, but the haunting mix of vocals and classical tunes is second to none. This almost angelic music will follow you throughout the game, and by and large makes the whole experience much more memorable. There is something to be said when a game can be defined by the theme song alone. While a lot of the game may have been translated from German, the music- lives on. 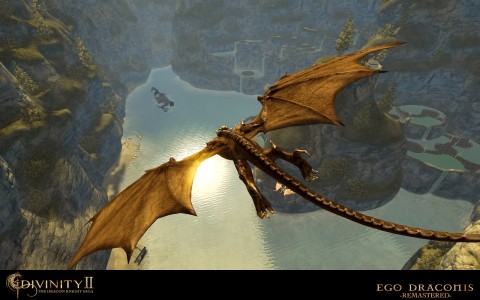 These days, it is very hard to find a “pure” classical form role playing game, and in many ways this is what Divinity II represents, a return to old form of simple questing and talking to people. By stripping this back though and trying to pitch itself as Action/RPG it misses the mark, with the first half of the game lacking in excitement and the second half, in depth. Flames of Vengeance addresses some of these issues by getting straight to the meat of it, but retains less than spectacular graphics.

Worth trying at least once, or at least the demo; only the most dedicated of Dragon Knight are likely to see out the 100+ hours of gameplay, which is excellent, in theory but not execution.