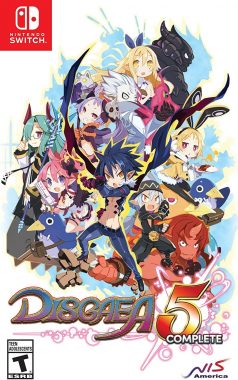 The Nintendo Switch has gotten its feet wet, and thus far has been nothing but impressive. In what is surely an attempt to capture a little bit of that success, Nippon Ichi have put their heavy hitter on the semi-portable with Disgaea 5 Complete. Of course fans of the franchise will be happy to see an old favorite make the transfer, but is this journey one that came without hiccups? Let’s find out.

As usual, the story is where the experience lies within Disgaea, as 5 still doesn’t miss a beat when it comes to its narrative of revenge. As a quick catch-up for those new, Void Dark is destroying Netherworlds one at a time. Killia, our main protagonist makes a stand against him with Seraphina and several others – utilizing their hate to protect one world. It’s a fascinating story and quite enjoyable, and features DLC to make this story a bit more “Complete”. 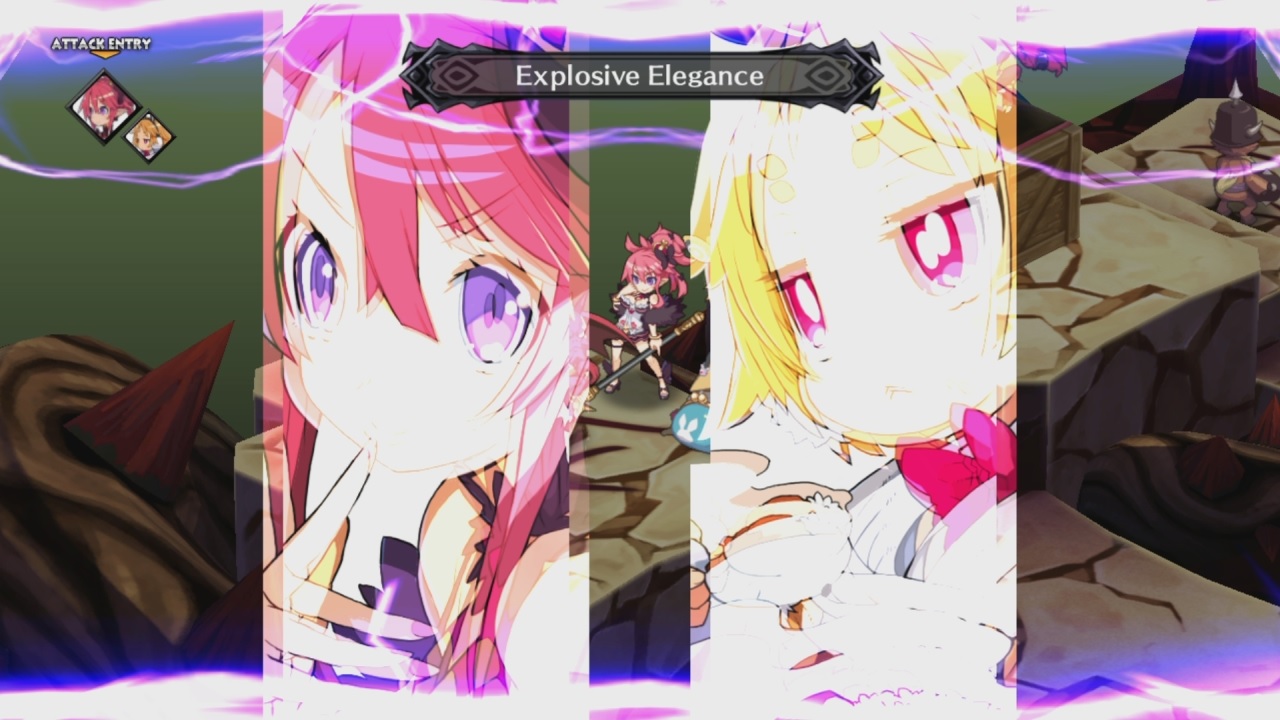 Those who pick up this version can also play into eight bonus scenarios (which are not that long), as well as add several fan favorites to the past to their roster, such as Laharl, Fionne, and many others. This is mainly an offering of value, truly – as that DLC for Disgaea did not run cheap on the Playstation 4, and having the ability to get more out of a game that prides itself on over 100 hours of content should be more than enough for most to give it a look.

Disgaea 5’s gameplay is honestly not too different from its predecessors at the core. The concept remains the same, as you utilize a very well built strategy RPG engine to diminish a great number of oncoming enemies. As most returning players know, every battle takes place on an isometric map, where players have to utilize each character’s special abilities in order to attack. The environment also plays a role in some battles, but most of the time – it is the player controlling a set number of units, facing off in turn-based affair with multiple opponents. Yes, you still have free roam to explore and what have you outside of battle, but in battle – it is a game of shuffling through menus and utilizing all of the upgrades and goods that you have been collecting in order to conquer the current fight. 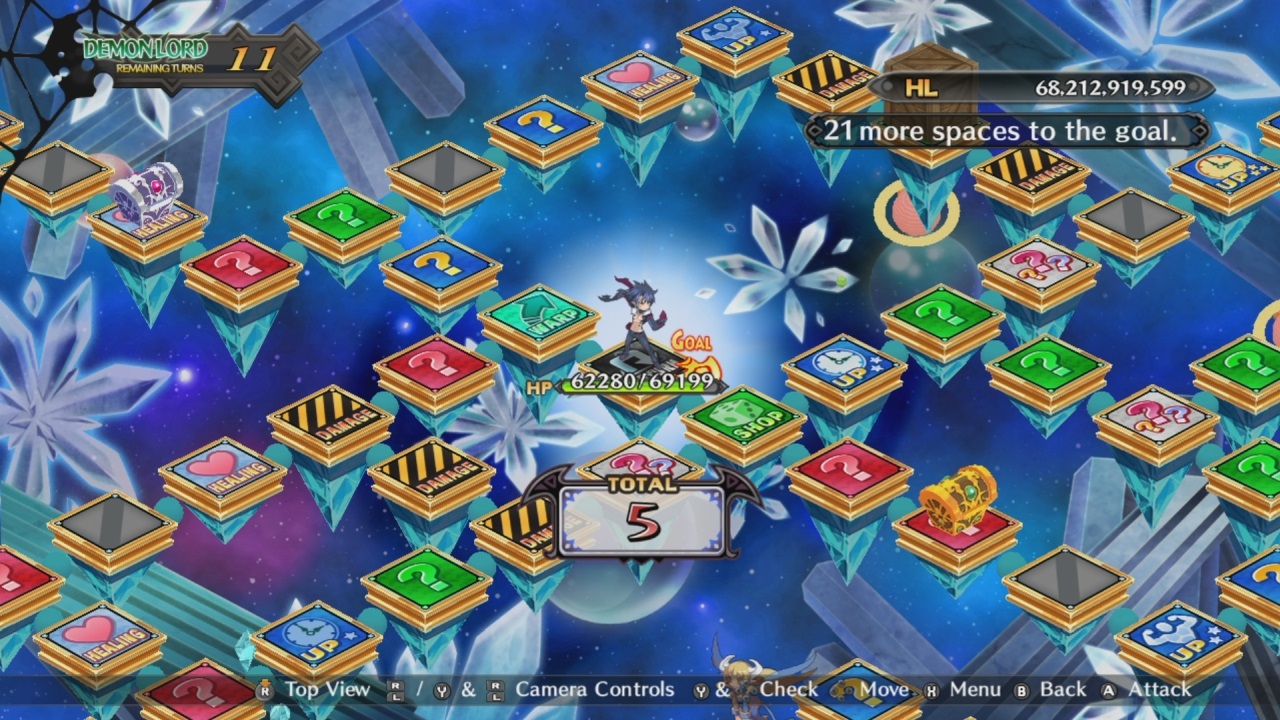 For the “Complete” Switch version, we really don’t have a lot of general upgrades other than DLC, so I won’t go on and on about new features compared to the Playstation cousin of this title that came out a while back. That said, there are some awesome new mechanics in play for newcomers to the fifth installment, and with the already 100 hours of gameplay – that is a lot to chew on for a good while. Players can go into a “revenge” system when their units have fallen, boosting stats and momentum to up the chances of survival. While in revenge mode, specific characters can also use a very special Overload attack – which in turn will change the tide of battle by making the enemies fight each other or allowing for up to three different attacks to be used in one turn. Sure, only Overlords can execute this ability while in revenge, but it certainly is a nice little gimmick that feels right at home in this franchise. 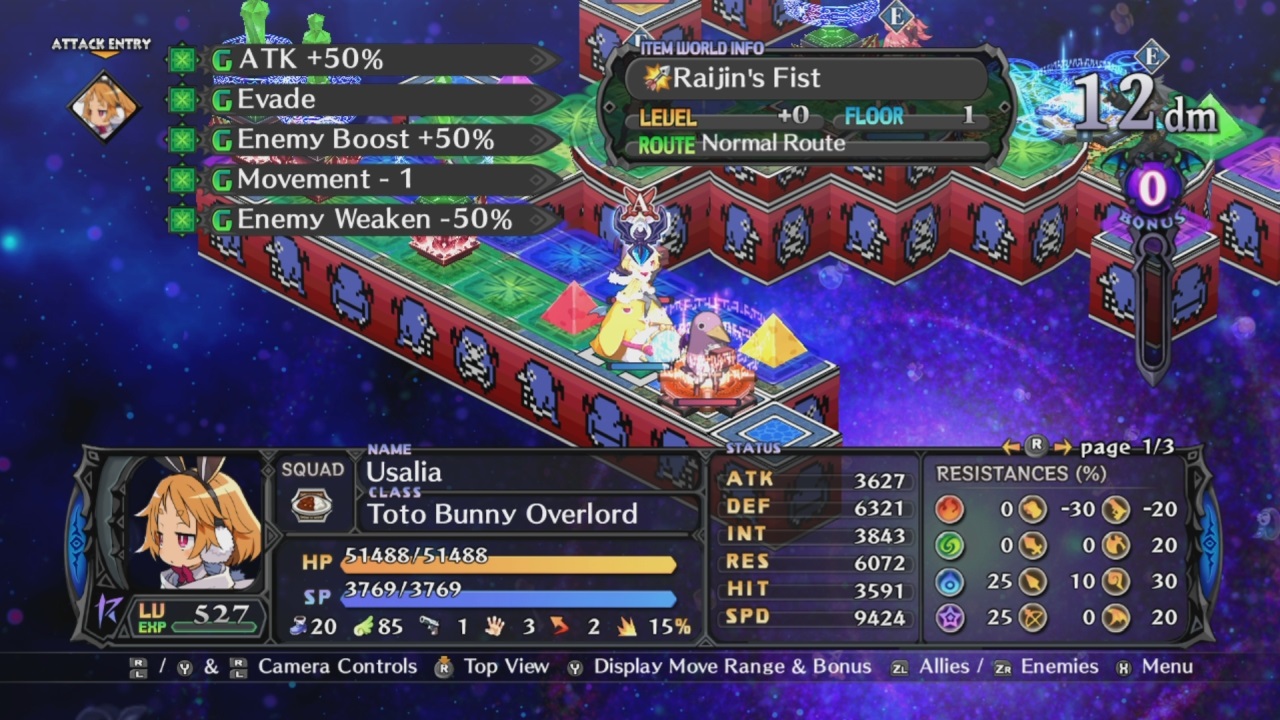 While the depth of Disgaea is satisfying, it may be too much for many players. This is a Nintendo console and it has been a minute since I have dove into a Disgaea title. Disgaea does not hold your hand at all, as there are a ton of menus, drenched in options for customization that add several layers to the experience. It is easy to get lose and other than minor tutorials, one will need to understand the lack of accessibility comes with a territory, as NIS have constructed a game (and franchise for that matter) that is meant to come with a steep learning curve. Can new people hop right in? Yes, as long as you have the patience and desire to take time to feel around, or else you could be missing a lot of wonderful options that could turn your experience around completely. Just don’t let the innocent little charms of the characters camouflage the heavy amount of substance, as there is a monster underneath this hood that hides its most enjoyable elements deep within its body. I say this because I had to grind a lot at times, and found out that there are several non-battle related events that fill the need to do that, which made my own experience much more pleasant. 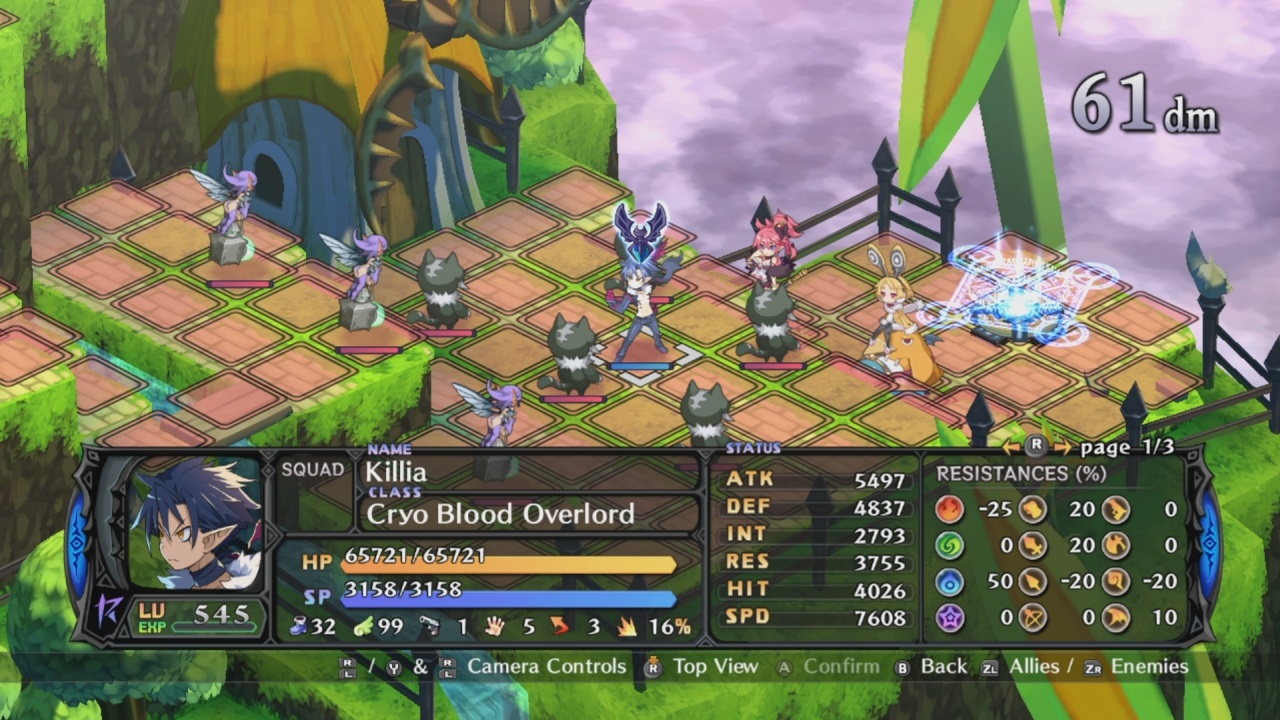 Instead of DLC, the Complete offering gives us a Special Item Shop, which kind of eases the blade of the game’s difficulty. There are a good number of free items up for grabs, along with a good number of characters that should point any new player into the right direction when it comes to squad building, which is an integral part of the game. There is also some currency incentives in this, and while it may make the beginning of the game easier, it doesn’t really matter in a game this long and advanced it that money is spent or not.

I really don’t know how I feel about the visuals for Disgaea 5 Complete. I mean, the sprites look great, the animations are well done – but everything visually just looks better on a smaller screen. I tested this a good bit and every single time I would put the game on a large screen, the visuals just seemed to suffer in a small way. I can say that I have only played this franchise on a portable (the DS version) so that may definitely be it, but Disgaea looks fine on a television, but feels right on the actual Switch tablet. It is a shame we didn’t see a lot of touch mechanics in the game, as it certainly is a title that could benefit from some swiping and direct touch due to the heavy amount of menus. 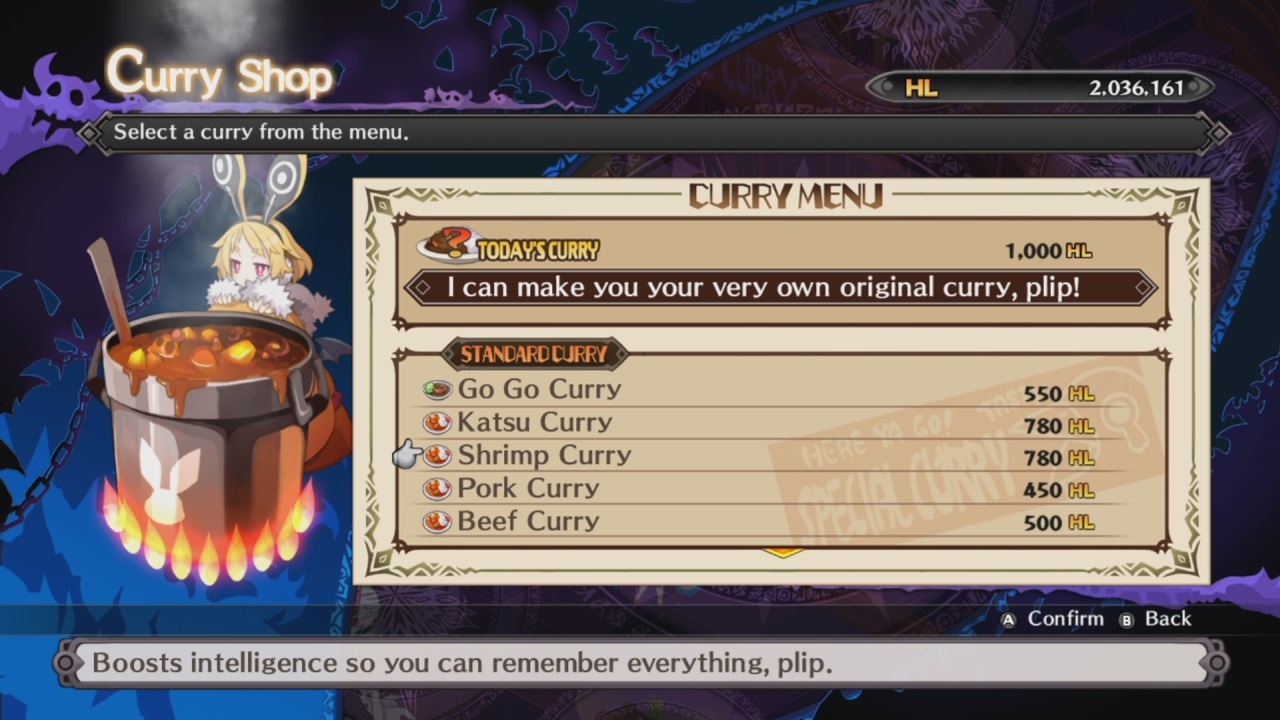 The music in Disgaea 5 is lovely. While not a ton of the tracks really come off as different from the prior installments, everything fits and gives these evil little faces a bit of light and humor, which is what makes the experience so endearing. The voice acting is also plentiful, and very well done. I wouldn’t expect a franchise with such a big name to take the easy road on a Nintendo port in terms of voice acting, but we all know we have seen Nintendo get ports with missing features such as frames, audio, dialogue, and so on, and its great to see NIS make a slam dunk by keeping everything just as it was in the original.

As of this writing, there are not a ton of titles for the Nintendo Switch. That changes everyday, but those who want a rich, strategic RPG on their Switch should definitely invest in this stellar experience, as there is a ton of content that will keep the player invested for some time. This may sound odd, but I feel like this release, despite it being a port – is the perfect example of a game you get to play in-between other games. That is exactly how I played it. A fantastic game on its own, and one that will give you a lot of satisfaction while you take a break from Mario Kart in order to grind a squad when friends leave. Disgaea 5 Complete shows that the Switch is a perfect platform for RPGs with depth and ambition, delivering a large offering that is best consumed on a small screen.