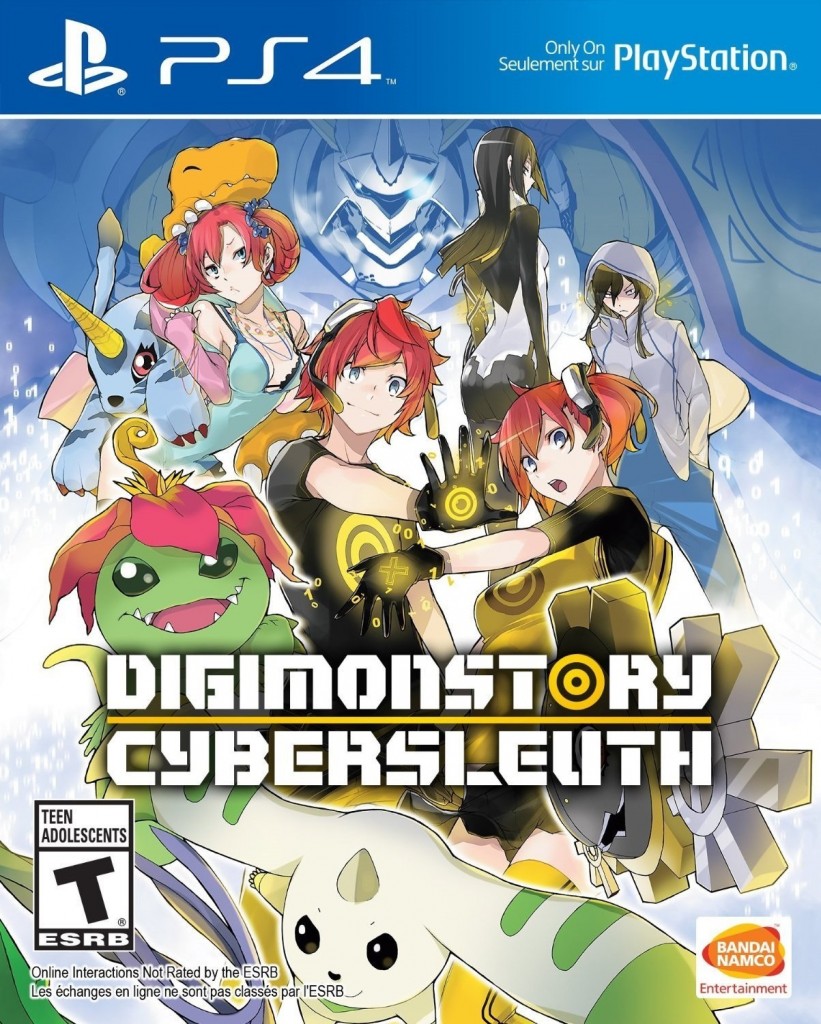 Overview
Digimon is a property that has been around for nearly two decades now. Once a rival to Pokemon, the franchise has managed to keep a loyal fanbase and has seen several successful titles land on past platforms. Digimon Story: Cyber Sleuth breaks the silence from the brand on the console front that has been present for several years now, looking to be this generation’s definitive representation as not only a video game, but an RPG experience. Does the detective work cooked up here equate in a hit for our digital friends, or has time proven to be too much for these monsters of the past? Let’s find out.

Story
Cyber Sleuth in my opinion is the game we have always asked for with Digimon. Unlike past titles, the player takes the role of a young hacker and is quickly whisked into the plot as a disease known as Eden Syndrome infected a portion of the public, landing the main character into hot water as they become hospitalized. This sickness leaves our hero half-digitized, meaning that their digital body can cross between both the digital and physical universe. After a bit of investigating the cause, a woman by the name of Kyoko is encountered, who just happens to be the lead of Kuremi Detective Agency. I think you know where I am going with this, as for the rest of the story – it is up to you to use your abilities and Digimon friends to solve cases for Kyoko, with of course your own problem being at the center of it all. 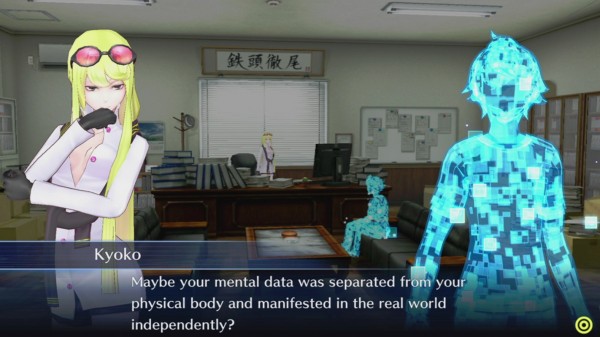 Sure, this has been done before in both anime and video games, but for a franchise that we have seen little from in this scope, the plot feels like a breath of fresh air. The characters are all interesting and the cases, while generally short each fit in well with the themes of Cyber Sleuth overall. A game like this could have been as thin as a napkin and still stood tall due to the amount of gameplay content and replayability, but Bandai hit this one out of the park – delivering both fan service and a sensible and fluid plot to follow as we visit Digimon yet again.

Gameplay
Digimon Story: Cyber Sleuth is primarily a Japanese RPG in every sense, as the player can explore, level up, and go into a turn-based battle system utilizing familiar mechanics that work fluidly for the entire experience. Of course Digimon are focus, as players do a good portion of their detective work in the digital world, with random battles occurring frequently as you break ground. To partake in these battles, you have to have the monsters – and that you will find a lot of on this journey. Starting out, the player gets the choice of one Digimon out of three to start out with. Once you randomly encounter a Digimon, you then scan it (automatically), with that particular species able to be converted at the nearest Digimon once a 100% scan is complete. Players can actually go up to 200% and get the strongest version of that monster possible, but that is more of an option for those who want a competitive edge – as the main game itself does not really demand perfection in terms of difficulty on a normal playthrough. 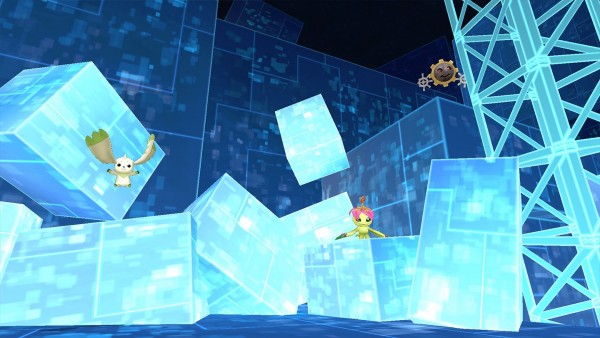 Collecting and raising each Digimon is honestly the most addictive and rewarding mechanic in the game. There are over 200 variants to obtain in all, and players are able to both Digivolve and De-Digivolve in order to have their preferred party of three. Yes, you can have more than three Digimon in your squad at one time based on how much “memory” you currently have, but only three can actually do battle at once – with the remainder able to swap in and out without having to visit a terminal. Once a Digimon hits a specific level and meets all given requirements, they can then evolve into a stronger species, which is usually one of five different Digimon. The route you choose is totally up to you and thanks to the wide variety that each Digimon can transform into, you can easily do a few scans and go down other routes during a decent grind session to get stronger. The only catch is that once you do Digivolve that treasured party member, their level is reset at 1 and you must re-level again to increase strength and stats. It really isn’t a chore to do this as older areas can always be revisited at anytime, and I myself spent at least ten hours just going through different combinations due to heavy amount of options provided. 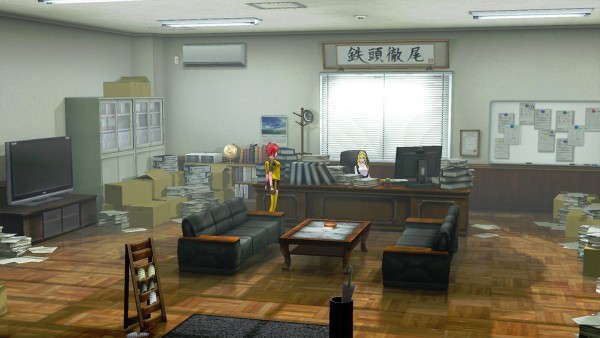 As the story progresses, more areas become unlocked with more cases appearing on Kyoko’s board. Standard progression is also not hard to achieve as Mirei in the lab will be happy to drop hints of where to go next if you’re lost. Those who want more to do will also find the Digimon Farm (or Digi-Farm) handy, as you can leave a Digimon there to train, develop rare items, or uncover new cases – with the farm growing as more time and effort is applied. This is definitely the sub-game that will take up a lot of time in-between quests, as there are several species and items that can only be obtained by visiting the Digi-Farm, enhancing replay value greatly. 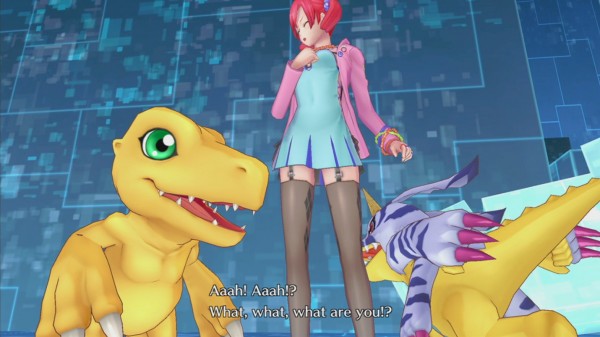 The battle mechanics to be honest are standard fare. Think Pokemon, where types and abilities come into play. Add more moves, the turn-based battle system, and a bit of flavor due to the large amount of Digimon and you have the combat system as a whole. It is hard to get wiped out as the battles are fairly easy, but the lack of difficulty actually works in favor for the combat, as players can focus more on progression and grinding, and worry less about having the best three Digimon at all times. I know, some will want more of a challenge, but the game gives that through an arena of sorts as well as local multiplayer battles. You don’t always have to use algebraic equations when making a battle system for hundreds of monsters like Pokemon, and Digimon trades depth for something far more addicting – and that is a sense of growth. There is nothing like seeing a once tiny blob grow into an undefeated beast. That feeling is exactly where Cyber Sleuth sinks its teeth in.

Visuals
Whether you’re playing on the Playstation 4 or Vita, the visuals in Digimon Story: Cyber Sleuth are really not any different other than a frame difference for the console platform vs the handheld version. The art style translates well here, as the character models look outstanding and with all three Digimon walking behind you with their own little personable struts, its easy to see that a lot of time and love went into make each Digi quite unique. I will say that the environments are a bit bland in the digital world as you will see a lot of blue, but that should be expected due to the theme of the locale. That said, the real world looks amazing and captures areas of Japan very well, with color, detail, and shading coming together to create some wonderful and atmospheric regions to explore. 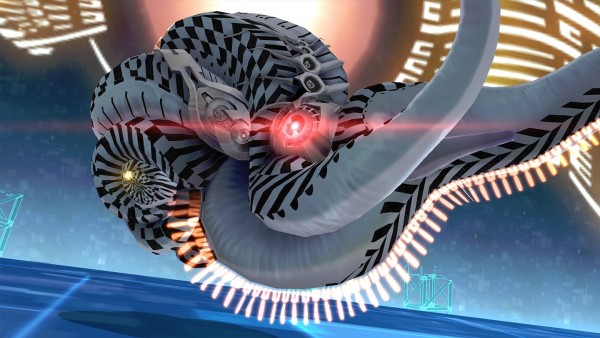 Audio
The soundtrack is also great. No, the anime styled tunes don’t apply here, but the music within is very fitting and upbeat, capturing the tone for each area. The voice acting is also well done – but this title is purely subbed with no dubs featured, so those wanting a fully localized version of this game might be a little disappointed that no English voice actors were used. There really was some quirky charms with the old English voices of Digimon, but to be honest, I did not mind their absence at all, as Cyber Sleuth feels like a more mature game meant for the same fans that have grew up a great deal since the phenomenon of the original product.

Overall
Digimon Story: Cyber Sleuth is nothing short of fantastic in nearly every way. The gameplay is addictive, the story is superb, and the Digimon themselves are nostalgic icing on what is probably the best entry in the franchise to date. Sure, this title doesn’t pack a punch in difficulty as the simplistic battle system doesn’t offer a lot of challenge, but for where that falters, the main concept of Digimon shines through – which is and has always been raising and micromanaging a team of Digital Monsters. Cyber Sleuth seamlessly captures what we loved about Digimon and adds to it, opening up an old world to a new generation of players.