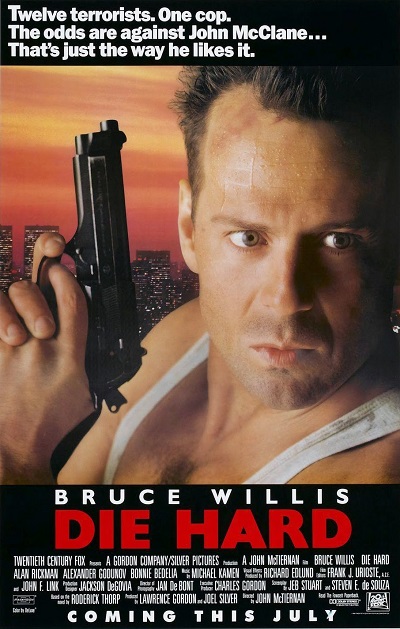 When a friend of mine told me that Die Hard, directed by John McTiernan, was their favourite Christmas movie I was dumbfounded. Having never seen the film before, I wondered how the 80s action movie could possibly qualify as a Christmas movie. Luckily, the folks at In The House came to the rescue and screened the film as their final entry in their third season of film screenings. For the last time this year, I moseyed on down to George St cinemas to see what all the fuss was about. 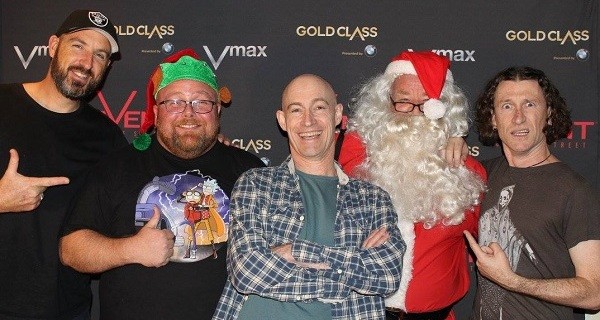 With more than their regular share of fanfare, as the Umbilical brothers hosted the start of the show. With their frenetic antics, they warmed up the audience and helped with the traditional competitions and impromptu quizzes. Jason ‘Jabba’ Davis and David ‘Quinny’ Quinn then followed through with some interesting bits about the film such as the fact that Frank Sinatra had originally been offered the role of McClane (due to a contractual obligation). With those frivolities aside, the screening began.

The narrative follows a number of characters with the first one being John McClane (Bruce Willis), a New York police cop, as he travels to Los Angeles to spend the Christmas holidays with his estranged family and wife, Holly (Bonnie Bedelia). His wife herself is an executive officer for a Japanese corporation and is attending the office Christmas party at her workplace. McClane is brought over to her office and we soon learn that things are not going well between the two as they both pursue their own careers, at the expense of their relationship.

All hell breaks loose when terrorists, led by Hans Gruber (Alan Rickman), break into the building and take all of the revellers hostage with McClane escaping capture. He then engages in a tense game of cat and mouse with these terrorists as he attempts to find a way to avoid capture and rescue the hostages. All the while, Hans engages in a deadly game of chess with law enforcement when they finally arrive. McClane soon learns that all is not as it seems and that, unless he acts, Gruber will be able to pull through with his nefarious plan. 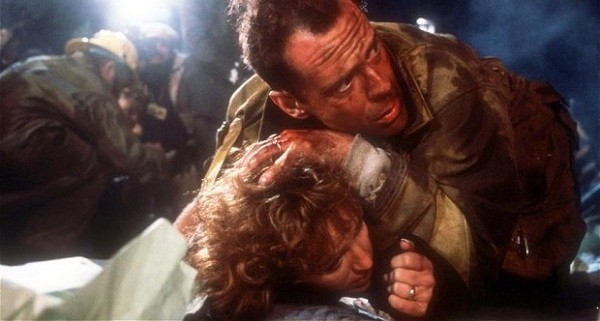 The narrative execution is interesting as, on paper, it appears to be the perfect set up for a thriller type action with plenty of tension and claustrophobic direction. A traditional approach to this script would keep close to the perspective of McClane with a lot of suspense and fear of the unknown. Instead of going for this approach, the film chooses to keep the audience informed throughout with multiple perspectives of both the heroes and villains so we always know who is doing what and where (in general). It makes the film much more dynamic and emotionally accessible than if a more traditional direction was taken. You can enjoy the action without too much tension as the audience is kept in the know even when the characters are not.

John McClane as a character is also particularly interesting for how he bucks conventional casting of action movies. Instead of following on with other 80s action films which generally had some muscled up beefcake playing the hero (such as in Predator), the original Die Hard instead featured Bruce Willis. Instead of watching an Olympian god going about dispatching the villains, we have an ‘everyman’ hero trying his best to overcome the odds and survive. His casting was a stroke of genius and he plays the role to perfection as a snarky, smart, and reasonably fit guy who you believe can get through the problems he faces but isn’t going to have an easy time of it. Every fight and encounter takes its toll and Willis portrays this so well that by the end you’re amazed that McClane hasn’t collapsed into a heap. It makes for much more compelling viewing and also means that the character of McClane can get much more characterisation than if Schwarzenegger was given the role. 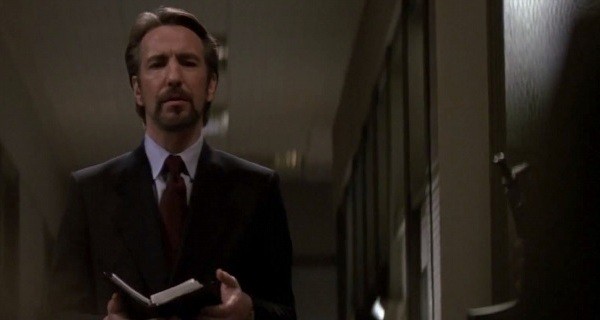 Gruber is similarly interesting in characterisation by Rickman who performs the role superbly. Rickman’s voice and accent is perfectly suited to that of a movie villain as his proper diction and annunciation reinforce Gruber’s menacing intelligence as he goes about being nefarious. Considering that this was his Hollywood film debut, he set the benchmark for himself here and possibly typecast himself as the brooding villain for the rest of his career. Regardless, you’ll love to hate Rickman in this film.

One aspect which I felt was very lacking was the character of Holly (McClane’s wife) who doesn’t get much of anything in the story. Besides being the motivation for McClane to come out to Los Angeles, which isolates him from his friends and contacts in his native New York, and to ultimately be the final prize for McClane to rescue. The film very much sidelines the female characters, in favour of focusing upon the male protagonists as they match wits and lock horns. Besides her corporate work, we get no sense that Holly has any agency as a character within the film at all. It would have been nice for her to have something more to do with her character, but I guess I can’t really fault the film for being a victim of its time and not having a kickass female character… nonetheless, consider this a point which the film fails on for a modern audience. 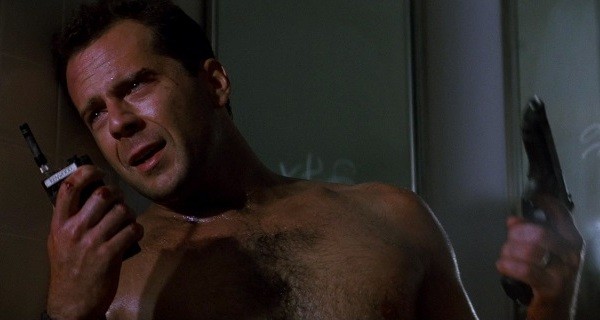 McTiernan’s directorial style makes use of a lot of interesting cuts and shots. Generally speaking, he would make copious use of multi-layer shots with the action happening in the fore and back of the frame with pans, trackings shots, and zooms. It gives you a real sense of the space that all the action is unfolding in as everything is happening in front of your eyes rather than being lost to quick cuts here and there. The final scene of Gruber also gives us one of the most visually beautiful villain deaths I’ve ever seen in a film. This is an action film which works to give us a clear of where the action is taking place in every scene. 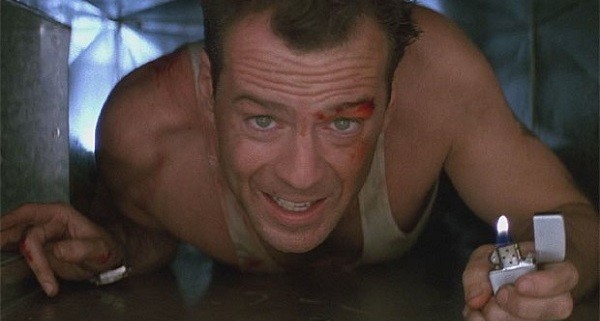 The soundtrack throughout the film is absolutely amazing. With the score running behind every scene, the impact of each moment intensified as we enjoy a mixture of Christmas classics and orchestral pieces. The former is used to create a sense of irony through juxtaposition with the narrative action while the latter is used to reinforce and finally release the suspense. The film’s well known finale with Gruber boasts one of the most intense sequences largely due to the audio compliment crescendo and full climax of the horns section of the of the film’s orchestra. In that crescendo, you’ll also notice the faint sound of bells reinforcing that this IS a Christmas movie even as the villain dies horribly/awesomely. 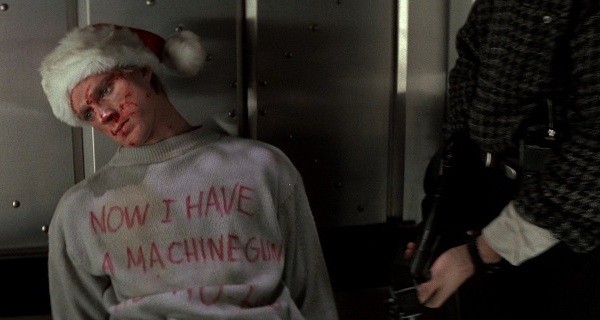 Overall, I enjoyed this film very much as the fun action romp it was. The story provides a simple setup but has plenty of twists and turns to keep you guessing. Willis and Rickman are amazing in their respective roles and it is easy to see how this film kicked off their careers. The direction throughout gives the audience a good sense of space as well as keeping us in the know for each narrative beat. The soundtrack goes all out with a mixture of orchestral and Christmas (sounding) pieces which give the film a unique tone. I would highly recommend Die Hard to anyone who is a fan of action films, and if nothing else; I’ll certainly be adding Die Hard to my rotation of movies to watch over the holidays.

Congratulations to In The House for an awesome third season! I loved reviewing the films they screened and I look forward to their next season, which you can find here.