Visuals
The visual representation in Diablo III is absolutely phenomenal. Stripping down the game to cinematic cut-scenes would produce an engaging short film. Visualizing the story through animated characters offers an emotional, jam-packed sucker punch to your mind-box. Just as the Harry Potter movies bring life to the books, the cut-scenes delivered in Diablo III deliver a similar feeling. While your main character isn’t depicted in any of the scenes, the bond you form with the leading support characters is emphasized and manipulated by the game’s twisted fate. When angels lose hope, you definitely know you are in for a bumpy ride. 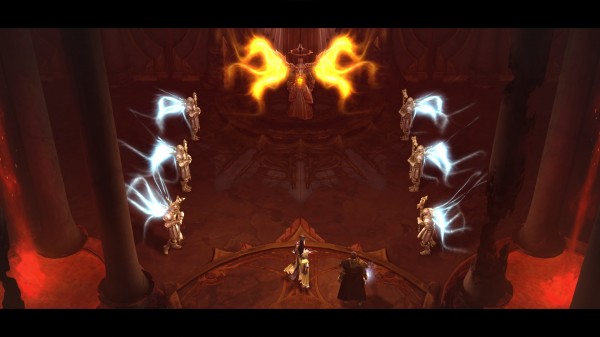 Beyond cinematic interludes, in-game graphics are beautifully mastered bridging the gap from Diablo II to modern optimization. High amounts of detail are given to the smallest of enemies. One of my favorite enemies is the treasure goblin. While this devious creature does not attack, you are enticed to chase it in which ever direction it chooses. Failing to kill this creature within a time limit will result in the goblin creating a portal to escape. If you are lucky enough to kill a treasure goblin, prepare for some randomized loot that could make your greedy effort worthwhile. Use extreme care thought, in later acts the goblin tends to find a plethora of monsters to fall behind.

Other visuals that make the game more appealing are boss battles. Unlike the previous titles, the bosses in Diablo III have become noticeably bigger and produce a variety of skills. One of my favorite bosses deals with the sin of gluttony. Unafraid to mow down on anything, Gohm utilizes four mouths to ensure his prey is fully devoured only to regurgitate moments later. While this boss uses a melee attack to decapitate its foes, Gohm creates fine layers of gas and propels out some vicious puke. Be wary as the Sin of Gluttony has been known to devour even the greatest of weapons along with its wielder. In your adventures you will even find a deceptively beautiful arachnid named Cydaea. The maiden of lust is a creature that hopes to entwined your body into a delicious morsel for her and her eight legged spawns. Destroying her children and avoiding her entrapping snares will deliver a crushing blow to one of the lesser evils. 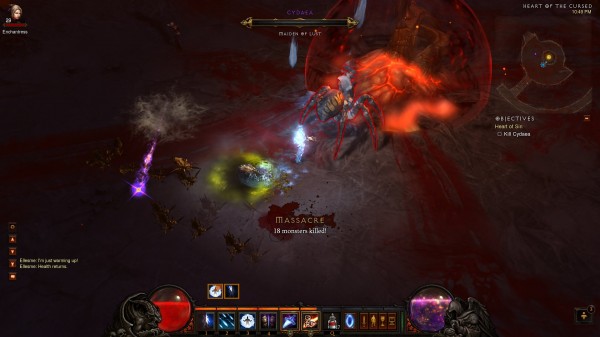 As abilities have been mentioned in the gameplay section, I find the wizard spells absolutely fascinating to perform. Dealing with pure arcane energy, a wizard’s spells can be a constant stream of energy flowing from the finger tips of its evoker. With the redefinition of runes, players can now adjust the look of their abilities by applying attainable runes (based on character level). Blizzard did a spectacular job making abilities more appealing and readily customizable.

Audio
I feel I cannot emphasize the cinematic scenes enough. Sound effects and character voices resonate within my mind as I fall deeper into the story. Hearing Deckard Cain’s voice once again lets me know that I would not be disappointed, even if he isn’t able to identify my items. Deckard’s niece Leah came into the fray offering a gentle yet concerned approach to the recent happenings of the world. And soon enough even Tyrael’s voice brings a resurgence of hope to a world that is quickly failing. All characters bring with them their own embodiment of a soul, and the events leading up to the different climaxes will either break their spirit or unleash total fury.

Sound effects consistently show off their bad-assery. Barrels breaking, jars smashing, bookshelves tumbling are few sounds that we have been accustomed too. But now Blizzard has incorporated even more physics as objects like chandeliers and burning coals can affect enemy targets. When you see a lever, your first instinct is to touch it. All of sudden you can see the chandelier crashing to the ground debilitating any enemy beneath it. What you hear, however, is the collection of chains clashing with a bone shattering thump to the cathedral floor. Additional grunts emanate from the mess as the chandelier quickly retracts itself to the ceiling.

Overall
When deciding a score for Diablo III, I had to look at what content was available rather than content that could possibly make the market in coming weeks. The auction house as-is provides for a useful trade commodity for gold to item transactions. And while there isn’t a player versus player system set up, players can join public games and help fellow adventurers in completing the game on different difficulties – depending on your character level.

A role playing game must first instill a plot with recognizable characters that feed into a surmountable climax. Based solely on this description, Diablo III merits the highest ranking delivering unforeseeable climaxes that collaborate into an ultimate conclusion. But even as the end seems bright for the world of Sanctuary, the hero questions if evil ever truly dies. In truth, time will tell.

Just imagine a 10 year old grasping the original Diablo for the first time. What an epic role-playing adventure it was, and it began my RPG gaming obsession. Over a decade later I now hold the newest edition in a death grip being immersed in the world of Sanctuary. Diablo is in my blood, and this blood shall not be wasted.