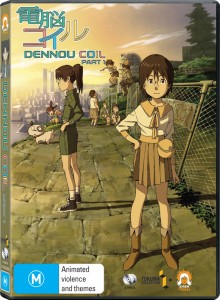 Overview:
Technology has become an ever present part of life, so much so that we have built up a reliance on it. Looking back a mere decade would show how very far we have come with technological advances. Most people thought flat-screen TV’s and touch-interfaced devices were things you’d only see in science fiction. Now they are a reality.

Dennou Coil proposes a hypothetical future, in which the internet is projected in a form of augmented reality. With so much strides being made in 3D stereoscopic technology and of course augmented reality technology, it wouldn’t be too far an assumption to say that one day perhaps what we see in Dennou Coil, could perhaps also become a reality.

The questions raised by Dennou Coil are not only profound but filled with urgency. Are we losing touch with the real world? 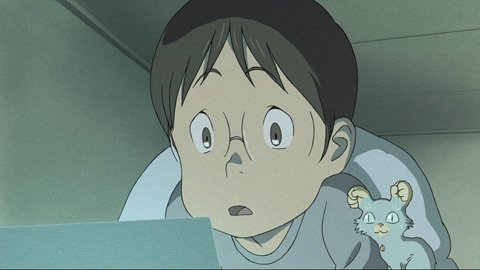 Story:
Dennou Coil is a science fiction series that not only poses a significant message to viewers, but it also manages to convey a deep story full of intruge and mystery. There is a lot of food-for-thought to be seen in Dennou Coil, and for the sake of writing a spoiler-free review, I will mostly be diving into the themes covered and the way it tells it’s story.

If there is an undeniable trait of Dennou Coil it is its warning of the dangers of technology and the affect it can have on a person. If you engross yourself so deeply in technology could you lose yourself in it? Could you become one with it?

The line between reality and the internet is undoubtedly a blurry one, with the virtual world being projected on top of the real world, it could be easy to lose yourself in the virtual world, which seems much more extravagent and void of the hardships of real life. The internet can be seen as an escape, not only for the characters of Dennou Coil but also for all of us. Afterall who doesn’t enjoy sitting down after a long day and jumping online for a bit, only to find that you’ve been sitting online for hours? It is easy to escape into and even easier to lose yourself in.

That is what Dennou Coil is warning us from, and through this tightly paced tale we slowly piece by piece see the depths of which one can lose themselves to technology. It has a hold over the human race. We rely on it for our information, for our entertainment and other facets of our lives. Some people have withdrawals without it, they have grown to accustomed to the power of the internet, the allure of it. It has a tight grasp on us as a race and Dennou Coil warns us to not let it take control of us.

The use of glasses as a means of seeing the virtual world is an interesting choice, as glasses are normally used to help you see clearly. In Dennou Coil they instead blur the line between what is real and what is not. They convince you that you are seeing clearly but in reality you are becoming deeper and deeper absorbed into what is in the end, fiction, a facade, an escape.

It can become an escape from many things, work, troubles of daily life and ultimately an escape from people. Technology can isolate you and push you away from those you love. Living in a fantasy world may be more fun than the real world, but it can be the most lonely a person can ever be. It is tenets of the story such as that which really make Dennou Coil really drive home it’s message. Because a lot of the people who would be watching this series are most likely the people it is trying to talk to.

My only qualm I have with the story of this first part of the series is that I did not want to stop, I wanted to continue watching until it reached it’s end, but I guess that will have to wait until part 2. All in all, there is a lot of interesting social commentary here, that you can not help but be swept up in it’s message. It will certainly make you reconsider how often you utilise your internet. 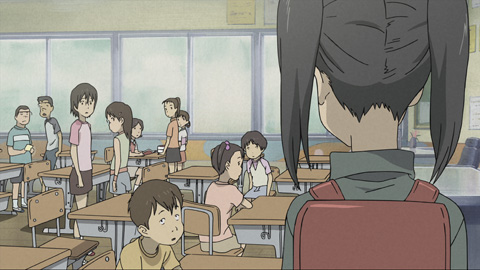 Visuals and Audio:
Aesthetically, Dennou Coil looks unlike any other. I have yet to see an anime series that looks remotely like this one. With such a unique visual style you are not going to forget this one. The art style perfectly compliments the series voice and heart whilst holding onto it’s unique quality that could only truly be pulled off by Madhouse.

Madhouse just have such a strong history of providing sheer visual experiences and Dennou Coil is no exception. Not only is this an appealing series, but it also has such wonderful atmosphere surrounding it. The animation quality is top notch and features a great deal of sakuga animation, showing that Madhouse put a lot of money behind this series to make it of the upmost quality.

When it comes to the soundtrack, no expense was spared with Dennou Coil. It features a beautifully composed selection of songs, with the opening theme song “Prism” being the standout. It is an inspiring rhapsody that is rarely seen in modern anime. I personally was moved upon first hearing it, coupled with the video that accompanies it. I just knew that whatever came after that would have to be good. I was not wrong. 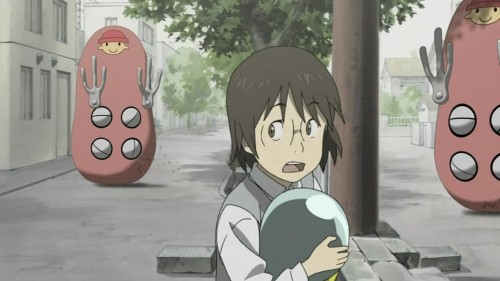 Extras:
For Dennou Coil Part 1, Siren Visual have used their usual slip-cover which is quite nice and glossy. Other than that there are unfortunately no notable extras. Which is a little bit of a let down but it ultimately does not take away from this series replayability.

Overall:
Conveying a strong message with an honest voice is a tough balance to achieve. Often the voice comes across to heavy and distorts the meaning, or it comes across too weak and flies completely under the radar. Dennou Coil Part 1 captures that balance with ease and provides an undeniably defiant voice, begging the question: “Is technology costing us our perception of reality?” That’s something that we must all ask ourselves.