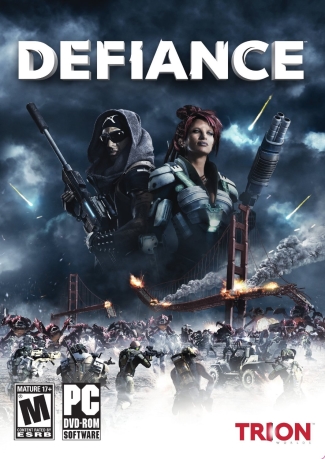 Overview
Defiance. It’s rare that such an ambitious project comes along. No, this isn’t a game based on the 2008 historical drama starring Daniel Craig. Defiance was designed as a third-person shooter MMO. Even more impressive is its union with the Syfy channel’s upcoming show of the same name that aims to unite two completely separate forms of media – television and video games. How well does Defiance hold up? Should you join the fight or rise up against it? Let’s find out. 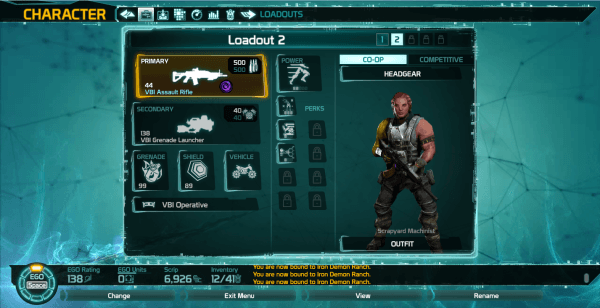 Story
In the near future the world is a very different place. Aliens known as Votans are fleeing from their homeworld to find resources. En route to a new home, their crafts, known as Arks, suffer terrible disaster and break up within Earth’s orbit. This causes pieces of the arks to fall to earth, bringing with it both treasure and danger.

You take on the roll of an ark hunter. Having recently signed with Von Bach Industries, your mission to find valuable arktech near the San Francisco Bay area goes terribly awry. Your ship is shot out of sky, crashing to earth as you escape in a pod. When the dust settles, your expedition leader is missing and you have to find him. You’ll also help the locals along the way, often right alongside the characters from the upcoming television show. 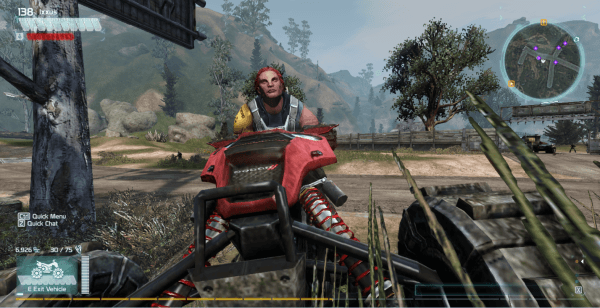 Gameplay
At first glance, Defiance looks like your run-of-the-mill science fiction MMO. There are aliens, mutants, spaceships, crash landings, and guns. So many guns. Even though it looks like an MMO, at its heart you’ll find a shooter and so much more.

Defiance is multifaceted. The combat will feel familiar to most players even if they’ve never experienced an MMO before. As with many other third-person shooters, you’ll equip and alternate between two guns at a time. You’ll earn experience points and occasional loot for dispatching enemies. Eliminating a bunch in quick succession earns you some experience bonuses. At its core it’s a basic shooter, right down to dodging, jumping, and tossing grenades. Add the RPG mechanics on top and you’ve got a unique experience that strikes the reward centers of your brain in a way that has driven RPG gamers to grind for decades.

One unique aspect that sets Defiance apart is its EGO system. This allows you to learn or upgrade skills and perks that seriously impact how you approach combat. Enjoy stalking in the shadows? Want bonuses for risking yourself in melee combat? EGO’s got your back. You initially get only one skill and one perk slot to equip, but as you level up more perk slots unlock for you to utilize. This grants you a feeling of accomplishment for doing something significant to beef up your character. 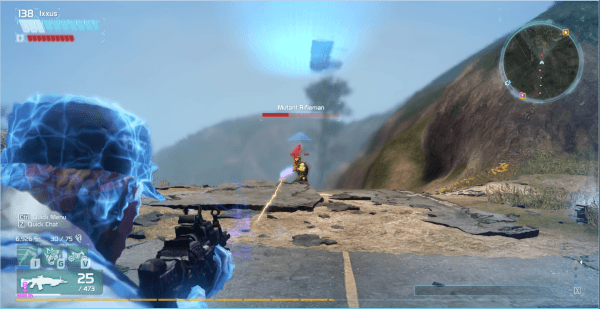 Apart from the combat system, the game is set up like most MMOs. There are hubs to pick up quests and perform various missions, which let you get some experience, cash, and items to help out. There are also dynamic events where you’ll join dozens of players to take out hordes of enemies, rewarding you with experience and money before sending you back on your way.

Story missions take you all across the world. You’ll be working in the trenches right alongside the characters from the upcoming television show. This serves to give you a good story and draw you into the world. The missions and their dialogue are fun and interesting. You’ll look forward to seeing what twists and turns are coming up next. MMO fans will likely miss the auction house and bank, however.

Within Defiance there are a handful of sub-games that utilize matchmaking. These include Shadow Ops, Team Deathmatch, and Cooperative Missions. Shadow Ops is a rebranding of the Domination game mode so many shooter fans are familiar with. Cooperative missions team you up with a few other ark hunters to take on instanced missions, including boss battles. The game modes are a welcome break from the norm, but each of them feels somewhat lacking in diversity this early on.

While you can use a keyboard and mouse for the PC, an Xbox controller can serve as an excellent alternative. The controls for the Xbox version of the game are brought directly over, so players who own both versions are free to choose. Menus actually feel more intuitive to navigate with the controller than mouse and keyboard. Both schemes work well, but more viable options are always welcome. 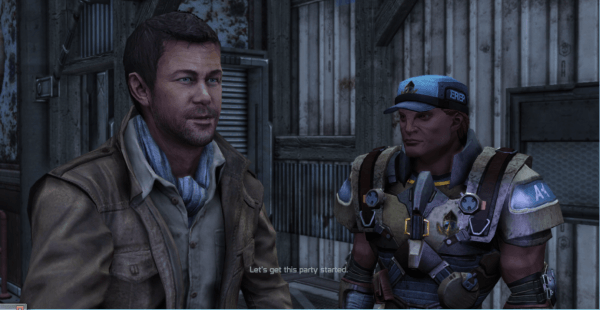 While the world is interesting to explore and a blast to play, the game is not flawless. Some enemies have fantastic design, but you’ll have to fight countless old mobs ad nauseum most of the time. Your personal inventory slots are the only storage you get and you start with only a dozen. Though you’ll earn more over time, inventory management can be cumbersome at times, too.

As far as your gear goes, the satisfaction tied to personalizing your look here feels diminished. You have “outfits” that work like the one-piece suits you put on a paper doll. It’s either all or nothing – no mix-and-match allowed. It would’ve been fantastic to have more customization options. This greatly reduces your incentive to keep deep diving for new loot like you would in other MMOs. New gear can be fairly hard to come by, requiring a random drop, quest reward, or vendor purchase. Defeating a boss doesn’t necessarily grant you a reward, either. If the Diablo series’ loot system was an indie car, Defiance‘s would be more akin to a moped. 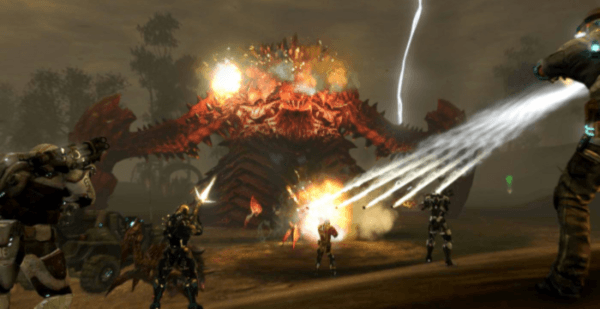 Cross-platform play is a topic many people will want to know about. Does an MMO produced for three different platforms stay consistent across each platform. Unfortunately, it doesn’t. That character you created on your Xbox? Don’t expect to see him when you log in to your PC. This could’ve been a fantastic way to unite the player base. Instead, they’ve effectively splintered it into three.

Microtransactions are another hot topic. As a game that doesn’t charge a monthly fee, be assured you’ll see plenty of opportunities to spend some dough. This is fine for vanity items like outfits and helmets, but it’s hard to feel that the lack of item storage isn’t also caused by this. Trion Worlds is more than open to the idea of you paying them a few dollars to unlock extra inventory slots, which is a big deal without a player bank. It feels like a cheap, unnecessary jab at fans who have already paid full price for your game. It’s also disappointing that money purchases don’t jump platforms either.

Visuals and Audio
The visuals in Defiance don’t really do anything to set it apart. The storyline characters are brought to life well and there are a few enemies with some real visual pop, but otherwise the game feels like a run-of-the-mill post-apocalyptic sci-fi game. It almost has an air of the Borderlands aesthetic, but with less color and personality.

That said, if you have both a console and PC, and visuals are a strong bullet point for you, the PC version is hands-down the better looking of the two. Everything is crisper, smoother, and higher resolution. The console version doesn’t look terrible, but when placed side by side, the PC just simply dwarfs it. 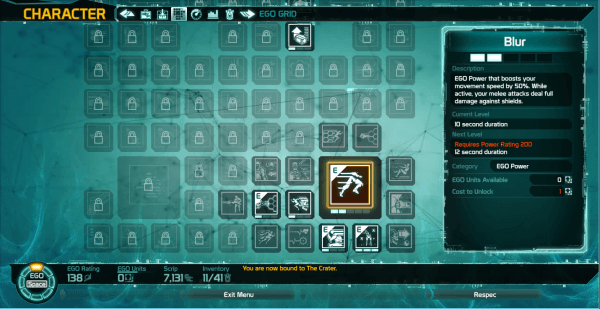 Music in the game is a fair mix of orchestral and electronica, able to provoke both somber, mellow tones, and intense, adrenaline-fueled hype music. Voice work in the game is a particular high point, showcasing the talents of the upcoming television show’s stars.

Overall
Overall, Defiance is a ball to play. Though the graphics aren’t particularly special and the music feels fairly routine for the setting, the game is fun. You’ll enjoy yourself whether dug in with a hundred other ark hunters fighting off a giant hellbug or taking on a group of mobs for a quick quest. Players familiar with MMOs may feel that a bit is missing here, and a few other flaws present themselves, but the game is young and the devs are working hard to eliminate issues.

Microtransactions are harmless at times but the opportunity to buy more inventory space when so little is provided feels like a cash grab. Still, there is a great deal of content with the promise of more coming in the form of DLC. With proper cultivation, Defiance could grow from a good game into a great MMO with some real staying power.