The trend of tower defence titles has come and gone but yet the genre still remains. Meet Defence Technica, a space-themed RTS Tower Defence title for mobile devices here to remind you why you loved the genre in the first place! Mindlessly murdering hordes of mindless aliens as they blindly charge towards your base is simply fun. Don’t expect much more though, Defence Technica really is your standard Tower Defence title. But hey, nothing wrong with that. Right? 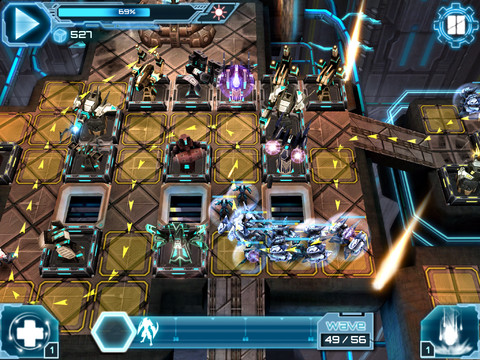 As with most Tower Defence titles, the goal of Defence Technica is to defend your base via Towers. It sounds simple, but it never is. Players will find that Defence Technica has a longer learning curve than you’d expect with deep gameplay mechanics. Maps can get quite large and complex and enemies can get to you from multiple directions. Hell, even the terrain can change! There are multiple types of opponents and different types of towers work best on particular types. However enemies are stupid and are more than happy to have a glorious cannon fodder death. The player must find a way to lead these suckers down the longest possible path to their own base and guard it with towers so you can kill them  before they get to the tower. To make this easier on the player, the “Silver-Eye” option is available to show the gamer which is the best path to create. These of coarse cost Crystals. 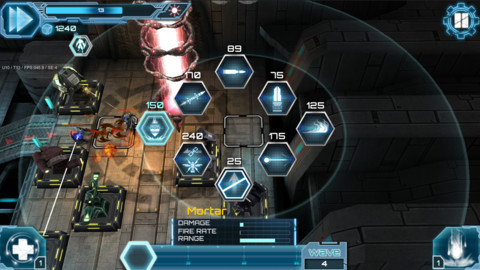 What are crystals you ask? Great question reader! I’m really enjoying this hypothetical conversation we’re having. Crytals are the currency in Defence Technica which are rewarded to the player for winning stages and such. These can be spent on using the “Silver-Eye” feature as well as cards. What are cards you ask? Wow you’re really on a roll with good questions today. I suppose that’s why you’re reading this review huh. Well cards can be bought using crystals, and cards give you an edge in battle. Each card has different effects on gameplay and they can be bought, sold, equipped, unequipped and even combined with each other to create other cards. Many levels are pretty much impossible to complete with out these. However many of them are quite expensive and almost impossible to save up to buy. Players can buy crystals with real life money though, and that’s where it becomes a problem. It’s really fun at first, but after a while it becomes near impossible to progress without spending crystals that the game encourages you to spend real life cash. It’s a total buzz kill that creeps it’s way into making the game feel less rewarding. Sure there are other modes of play for levels to earn crystals such as ‘hell’ and ‘endless’ modes, but honestly, it doesn’t cut it. 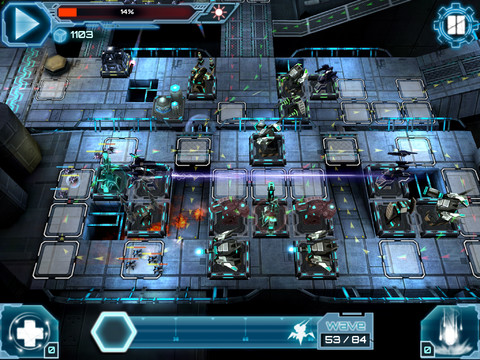 A long time ago in a galaxy far,  far away…there was some story poorly told with boring cut scenes. And by cut scenes I mean simple screenshots with huge blocks of texts that you’ll want to skip through straight away. Thankfully this game is not based on story but rather based on core tower defence gameplay. That setback aside, Defence Technica looks beautiful. While animations can occasionally be a little stiff, graphics and textures are a feast for the eyes. Detailed, smooth and even looking console-worthy. Truly a highlight of the game. Audio is decent and sound effects do their job. Music is exactly how you’d expect it to sound in an RTS – It’s not bad but it doesn’t really stand out all. 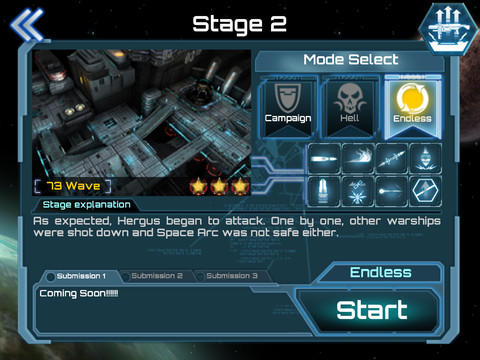 If you have intentions on picking up Defence Technica you’re going to get exactly what you’re probably hoping to get – a solid RTS Tower Defence game. It’s not revolutionary or mind blowing but it’s got deep game mechanics and addictive gameplay. It’s classic defence right on your iPhone. If your a fan of the genre it’s perfect for you, but if not a huge fan of the genre it might not be exactly what you’re after. It’s fun, but is dramatically held back by it’s expensive crystal system that encourages in-app purchasing. Sadly, Defence Technica fails to reach it’s maximum potential because of this. Regardless, it’s still  pretty fun.