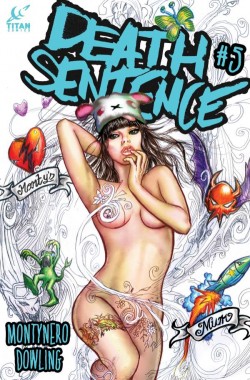 Death Sentence is a comic that, as of right now, hasn’t had too long of a run yet it has boomed in popularity and has quickly become a short series that comic book enthusiasts from around the world have been holding in very high regard, and it is very well-deserved. It is an odd story written and illustrated by a team of two men (Monty Nero and Mike Dowling) that looks into supernatural beings with a short time left to live and how they spend their final months. “Death Sentence” has a unique story paired with a very different view of the world we currently live in, it has heart, it has soul and this is why I believe it has become so well-received in such a short amount of time. This review will be covering issues one to four of the comic with issues five and six not yet being released. 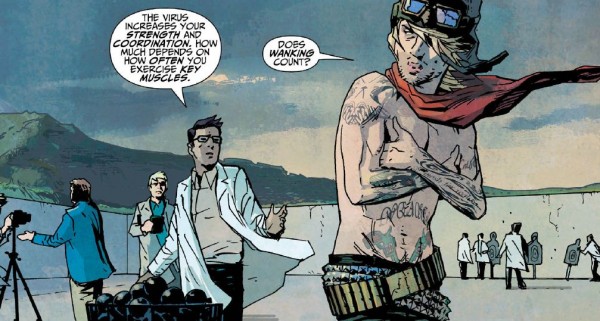 “Death Sentence” Issue 5 leads directly off of where Issue 4 ends and if you havn’t any idea of what the story was like in Issue 4 than I suggest you head over here and check out my review of the first 4 issues. The story is coming to a close and, although this isn’t the final issue for the short comic book series, it is quite epic and ends with one heck of an intimidating cliffhanger. By this point in the story both Verity and Weasel have been taken in by a government group that dedicates themselves to monitoring the G-Virus as well as harnessing its powers and searching for some sort of cure either permanent or temporary.

The search for a cure gets thrown into overdrive when news comes across that Monty, who is now one of the biggest enemies to the known world, has continued to have unprotected sex with his followers which is allowing the virus to spread rapidly, this means there are hordes of people around London with superhuman abilities and none of them would have a clue on how to use them properly. With a mass calamity threatening the world, the government decides to send Vertiy and Weasel onto the battlefield to confront Monty with the idea that they are powerful enough to combat his mind control abilities. 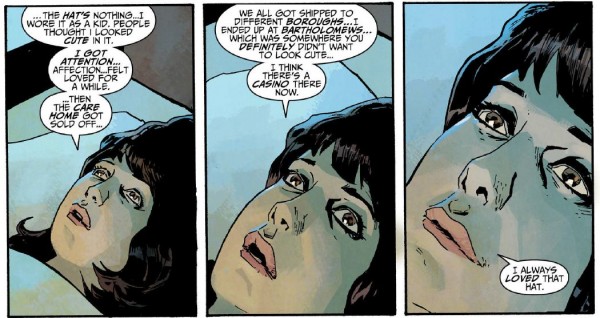 I wont explain anything past this because then it just leads into spoilers but you can imagine that one hell of a confrontation is about to take place between three of the countries most powerful citizens and it isn’t going to go down nicely. I’m really enjoying this storyline, out of all the comics I’ve reviewed as of late this one would have to be my favourite simply because of the oddly unique storyline. Clearly this comic has no fear, one of its characters kills the Queen of England and takes over the Royal Palace killings thousands daily, it is not a story that has been restrained in any way and that’s why I absolutely love it.

I’m a big fan of normal humans that gain superhuman abilities but usually the depth of their character development is actually quite…well, shallow. Thank God that a comic book like “Death Sentence” has come around because it shows us what is going on in these characters’ heads, it gives us a glimpse at the mental strain having these powers and being so close to death puts on a human. They’re powerful beings with nothing to loose that just want to leave their marks on the world before their inevitable death but it seems like some marks are far too big for this earth. 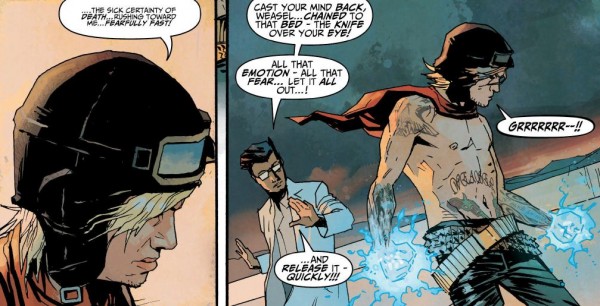 Look not much has actually changed between this issue and the last issues but that doesn’t mean it is bad in any way because the artwork throughout the entire series has been absolutely brilliant. It’s gritty yet beautiful and the addition of colours really brings it off the page. There are so many panels or full pages that have inspired me to illustrate or create art simple because of how good it looks. Pages seem to have a certain gravity around them that draws you in and keeps you looking long after you’ve finished reading what is on the page.

Mike Dowling, who illustrates the comic, has done an absolutely brilliant job with the artwork of this series and I can’t help but look up to the man simply because of how talented he is. I was brought to a smile by the final page of this issue, though I can’t get into too much detail I will say that the use of warm colours and the position of characters and environments really made for an intimidating image that had me looking at it for longer than necessary. THAT’S what makes a good comic book! One that keeps you on the page and I think that “Death Sentence” has that kind of thing down to a fine…art.

The best thing “Death Sentence” could have done now that it is in its fifth issue is to maintain the fantastic quality that the other four issues gave to audiences and it absolutely did that. It was easy to digest but also just in-depth enough to keep me interested and I can only assume this is what the general comic book-reading masses think too.

It has its own style and marches to the beat of its own drum, it’s not afraid to take daring leaps, it’s not worried about national backlash, it just wants to tell a story and it tells it damn well! There’s a reason this comic book constantly sells out in stores and that’s because it is down right brilliant. If you’re looking for an intelligent action series that has you thinking just as much as it has you grinning than I believe “Death Sentence” is the one for you. Bring on Issue 6! 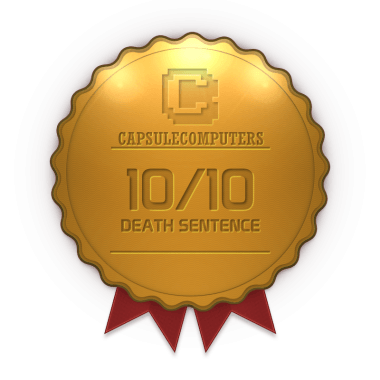