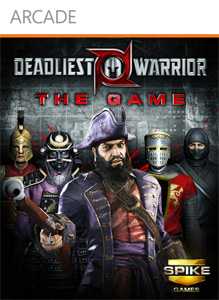 Story
“Deadliest Warrior The Game™ allows you to choose from history’s greatest warriors, equip them with signature weaponry, and go head to head against the greatest fighters that ever lived. Deadliest Warrior features five play modes, customizable warriors, and true-to-life action with interactive environments. This is a unique fighting game that is easy to play and hard to master. Sever limbs, decapitate heads, and taunt your enemy’s lifeless corpse to build up ranking points and compete on a global scale to become The Deadliest Warrior.”

Deadliest Warrior is based off of the Spike TV series of the same name. In the TV series there are experts that collect data on warriors and then run a series of simulations to see which one would rise victorious in a battle against each other. In this game you don’t collect data (because that would be boring), you just fight as a warrior against other warriors as you attempt to rise above them all.

Gameplay
The goal of the game is extremely simple, kill your opponent. You can play as an Apache, Centurion, Knight, Ninja, Pirate, Samurai, Spartan or Viking. Each warrior has its strengths and weaknesses and each one also has its unique attack style. As you fight with multiple characters you will notice the large change in actual fighting styles. Using heavily armored warriors requires more guarding, while light armor warriors requires more dodging. Using short weapons requires a closer proximity, while long and ranged weapons can let you stay at a safe distance.

There is an extremely simple attack setup and there is no need to memorize a whole bunch of extremely complicated combos. Instead of memorizing combos you instead need to strategize a bit. While the knight is heavily armored and hard to damage, they are quite slow and can be out maneuvered. Using an enemy’s weakness against them is the best way to win every battle, but your warrior you are using has a weakness as well which you must keep from being exploited. Most rounds last 20-30 seconds, but in that time you need to make sure that you aren’t the one that is dead in the end.

There are high, medium, and low attacks each with a corresponding button press that makes it extremely easy to aim your attacks. You can also guard and throw projectiles. Dodging is also very helpful, every character can dodge but the lighter and more agile characters are able to dodge a lot better. The stamina bar is what determines how much dodging and blocking you can do. When that stamina bar is low, you are more likely to be stunned by an attack leaving you wide open.

The game has 3D dimensions which lets you move around and explore the small arenas. The dimensions also let you roll and jump around as you dodge your opponent. The only problem is that there isn’t any character lock on feature, so when you try to back up you turn around and show your back to the enemy. To remedy this, you can dodge backwards but dodging doesn’t always do what you want it to do and could get you killed.

The game consists of 3 difficulties and 3 game modes. Normal difficulty is extremely easy, and lets a baby beat the game; this difficulty is actually the least fun because everything dies too fast. Hard difficulty is the best for having fun while playing computers; hard lets you cut off limbs while letting the CPU be smart enough to defend against a few and stay alive longer. Deadliest difficulty is the hardest and is for those who want a challenge. This difficulty requires you to fully exploit every opponent’s weakness. The 3 game modes are Arcade, Survival, and versus. Arcade mode pits you against all the other warriors, one after another, as you rise to be the best warrior. There are minigames placed between are certain amount of rounds that require you to either cut up a whole bunch of pig carcasses (If you have seen the show, this isn’t that odd), or kill an enemy where every blow chops off a limb. Survival pits you against an endless number of opponents and you try to kill as many as you can. Versus is a one on one battle that you can play with a CPU, with a friend on the same console, or over the internet.

As you progress through Arcade mode with each warrior you will unlock a second weapon for the short range, long range, and projectile weapon categories. A second armor can be unlocked as well. Each new weapon and armor has varying stats which mixes up gameplay even more. Each weapon has a speed and damage stat, while the armor has a speed and a “how much protection you get per weapon type” stat. You can mix and match the weapons and armors in order to accommodate your play style even more. There is also an option to change the color of your armor a bit, but it is completely aesthetic and the defaults usually look the best.

Audio & Graphics
The audio is good, with swords clashing on armor as well as slicing through arms. There is background music during the menus which is turned off during fights in order not to distract anyone. While voice acting for each warrior is muffled they do coincide well with the overall warrior. The samurai yells something in Japanese, the Spartan yells “SPARTA!”, the ninja doesn’t speak at all, and the pirate is drunk. The voice acting could have done with a bit of work, but it isn’t that bad and is only noticeable during certain parts in the game.

The game is quite visually pleasing; in the gory sense of the word. As you chop off arms, legs, and heads blood will splatter everywhere, and the body part will fall to the ground and roll a bit depending on the hit. Blood covers the floor during battles and by the time you finish a round your warrior is also covered in blood. The levels you do battle on are also pretty cool looking, with cherry blossoms falling to the ground, and certain bits of scenery that can be cut and fall to the ground. The scenery doesn’t actually do anything when destroyed, but it is still a nice touch.

Achievements
The achievement list is actually a pretty good list. There are the grinding ones that require 100 decapitations and 300 Spartan kills, but at least the Spartan kill achievement name is funny. By the time you get the grinding achievements you will most likely have the others as well. There is one online achievement which will actually take some time to get due to a large number of quitters online who don’t like losing. Also, I tip my hat off to the Monty Python and the Holy Grail reference; if you haven’t seen the movie you will never get the reference. The avatar awards are also pretty good. The Samurai Armor is unlocked by beating arcade once on any difficulty, the helmet on the other hand is a lot harder to get. In order to get the helmet you must beat arcade with every warrior on deadliest difficulty, which will take a while because it is the hardest difficulty after all.

The Two Avatar Awards Are:

Overview
While many people look at “Deadliest Warrior” as a TV show game that couldn’t possibly be good, they would be mistaken. This fighting game doesn’t consist of the traditional button mashing in order to stream out an intense combo that your opponent doesn’t even know. Instead the game relies on a simpler set up that relies more heavily and waiting and striking when the time is right. This type of fighting game opens it up to a much larger audience. Deadliest Warrior is still a fighting game with the same rules, but there is just simply something satisfying about chopping off your opponents arm and then following it by a decapitation. Being able to play as multiple warriors with different play styles also creates diversity in the way you play. While Deadliest Warrior isn’t perfect, it is still a surprisingly fun fighting game which shouldn’t be overlooked (Unless of course you really don’t like fighting games at all).
I give Deadliest Warrior