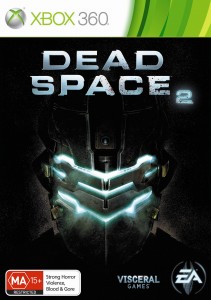 For anyone that played the original Dead Space then I’ll assure you right now that everything you loved about this game has been improved and enhanced in Visceral Games latest offering Dead Space 2. If you passed on the first one and are in doubts on this one then let me tell you right now that this game delivers full stop. This sequel is a vast improvement on the first game, switching from the claustrophobic corridors of the USG Ishimura to the large openness of the Sprawl, a highly populated space station orbiting Titan, one of the moons of Saturn where the horror takes place. 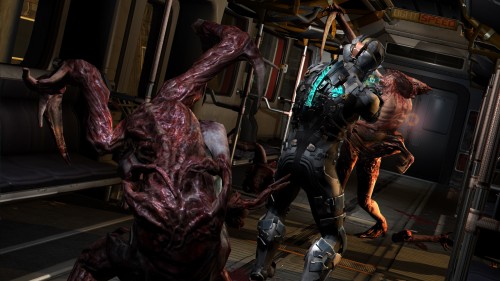 Dead Space 2 kicks off three years after the events of the first game. Isaac Clarke mysteriously wakes up in a hospital ward on the highly populated space station The Sprawl, in the mitts of another Necromorphs (‘space zombies’) outbreak.  Not only this, Isaac is suffering from his own internal madness in the form of dementia brought on by events that took place from the first game with the alien artifact The Marker, which makes a return in this game with the Necromorph invasion. It’s up to Isaac once again to survive the carnage and piece together how another Marker made its way onto the Sprawl.

The story in Dead Space 2 is more of a personal one in my opinion at least, for starters Isaac is no longer a mute, silent protagonist like in the first game and this time around he has a voice and face to show off. Not only this, players follow Isaac down his crippling dementia and the madness that is in his head still haunted by the death of his girlfriend Nicole on board the Ishimura. 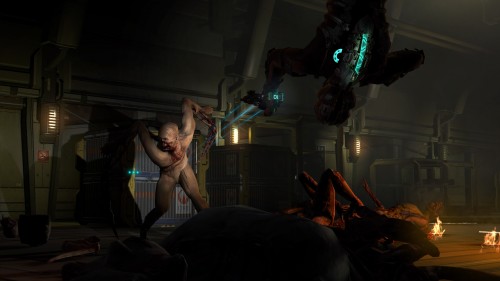 The environment change from a space ship to a space station (especially at the start of the game), allows for more of a ‘human feel’ as players are witnessing the bloody, horrific outbreak of the Necromorph first hand, as opposed to the aftermath of it as seen in the first game’s set up. Although the latter is still seen through audio and text logs scattered around the place which reconstruct the game’s back story, which again adds to the game’s ‘human element’ while at the same time sheds light on the bigger picture between the Church of Unitology and the Government.

Anyone that’s played the original Dead Space will feel right at home here. Strategic dismemberment is back and as satisfying as ever, shooting off a Necromorph’s limbs one by one never gets old. Players can experiment with some new game play features that mixes up combat, added to the arsenal are an assortment of new weapons such as the Javelin Gun, Seeker Rifle and Detonator alongside the favourites the Plasma Cutter, Line Gun and Ripper from the first game. Not only this, players are now able to use a Necromorph’s limb against themselves by uses of the upgraded telekinesis power which turns severed limbs into deadly weapons.

As a survival horror game collecting scattered ammo, credits and valuable power nodes is vital your survival, stock up on health packs and ammo because you never know when there is going to be a “surprise” Necromorph attack in this game. The upgrading system from the first game is back, and is an excellent incentive for exploration as you look for valuable power nodes to upgrade your weapons and suit which is a must if you want to survive. Suits in the game have been improved from the first. Now suits provide specific bonuses such as weapon damage or store discounts depending on what suit is equipped by the player, more than just a cosmetic change. Isaac’s melee attacks have also received an upgrade in this game and now pack more of punch than ever before. 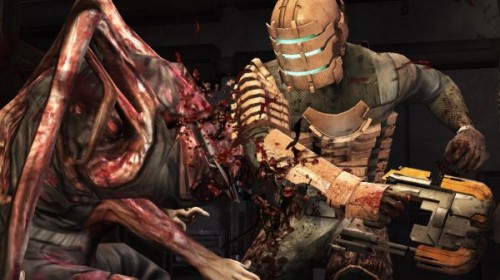 One thing I must mention is that Dead Space 2 plays out quite linear, whilst there is a degree of limited exploration; in general players are guided down a pre-determined path finishing with a set piece battle. This isn’t a bad thing as the linear experience is great fun but the new location, the large open Space Station the Sprawl seams to suggest an open world hub rather than just down a set path. Regardless, it’s still great filled with very cinematic moments and fantastic boss fights.  Of notable mention set piece battles with the new enemy type ‘The Stalker’ feels very reminiscent of the Raptor scenes from the Jurassic Park movies. These new enemies will run, hide and wait for the perfect opportunity to strike, which is normal when your back is turned. Other memorable moments include the creepiest day care centre ever, flying straight down in zero gravity whilst dodging debris and another moment (without too many spoilers) that feels like something straight out of Gears of War 2. 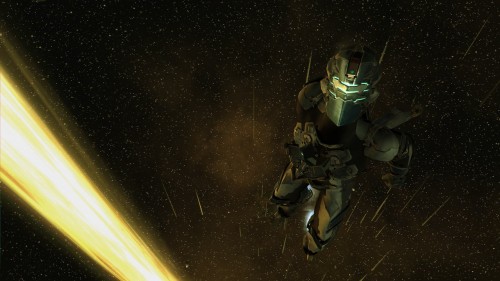 New to Dead Space 2 is its multiplayer putting players in the shoes of either Sprawl Security Officers or Necromorphs in 4v4 objective based game modes. There is a slight story element tied into of Dead Space 2’s multiplayer depending on what map you play. For example in ‘Escape’ Security Officers need to traverse the facility to a set of escape pods to escape the Sprawl and in ‘Solar Array’, the team have been ordered by Tiedemann to fire the Solar Array upon a set coordinate. In all multiplayer games, the goal of the Necromorphs is simply stop the humans achieving their objective. Each team has their own unique powers and upgrades, the humans can unlock better suits and weapons and Necromorphs can unlock more health and improved attacks. Playing solo through the main game and switching to a team based multiplayer is different and fun. It does provide some good moments but honestly they don’t have anything compared to the massive set piece battles as seen in the later parts of the main game. 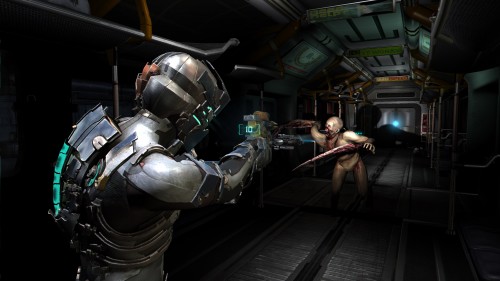 Hands down this game looks and sounds fantastic. Guns and enemies sound like they should, sheer raw power. The ambient noises of the Sprawl, the underlying bass hum adds to the game’s immersion. The game’s realistic ‘silent void’ space vacuum is one that needs to be heard in person. The score and music is very good, especially the loud screeching upon scare tactics of the Necromorphs. This game is very gory – blood and guts are all on show here. Expect to see limbs being ripped off, exploding heads and a lot of blood, all presented wonderfully by the game’s great looking graphics which have been tweaked and improved whist still retaining the same look and feel that made the first game so memorable, much like the over-the-top deaths of Isaac Clarke in this game. 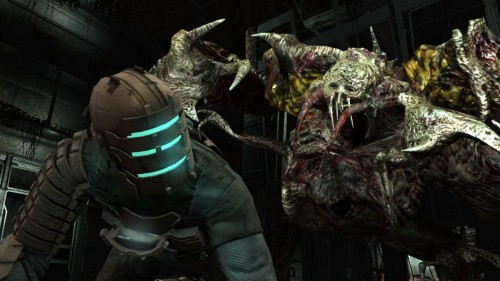 Dead Space 2 from start to finish is overall great experience. The Dead Space series likes to thank its fans PS3 players especially, as each copy of the PS3 version includes Dead Space: Extraction remade in HD for the Playstation Move. As well as, players that registered their copy of Dead Space iPad and iPhone will receive exclusive in-game content.  Visceral Games has poured a lot of love, care and polish into this game and it really does show. Set piece battles are impressive, challenging and memorable while they last. Shooting Necromorphs never gets old, and thanks to the additional multiplayer it won’t as 4 on 4 battles are sure to eat up the hours.