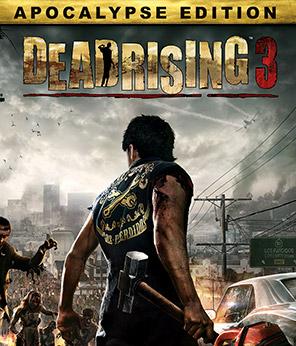 After spending almost a year as an Xbox One exclusive, Dead Rising 3 has been ported to Windows by Capcom Vancouver. Dead Rising 3: Apocalypse Edition contains the base game and the Untold Stories of Los Perdidos DLC. The port has been retooled with high resolution graphics, game controller support, and Steam integration.

A decade after Dead Rising 2, Nick Ramos’ life as a humble mechanic in Los Perdidos is turned upside down by a zombie outbreak. It appears the Zombrex chips that keep people’s zombie infections in check have malfunctioned and the government is faking their rescue efforts in Los Perdidos. Nick Ramos and his friends are looking for a way out of the city, while possibly bringing the truth behind the events in Los Perdidos with them. 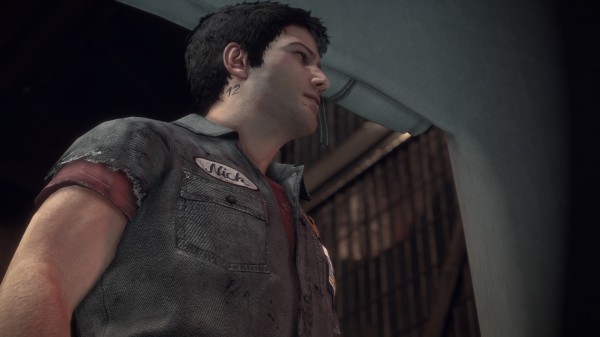 Dead Rising 3’s plot is like the sequel to a long running summer blockbuster franchise. It will not win any awards at Cannes or any other prestigious film festivals, but it is guaranteed to be an entertaining but  safe bet. Dead Rising 3 does not stray too far from the previous two titles, falling back on the same tropes and plot twists, with some new characters and a fresh coat of paint. The formula still works well, as the main plot line still proves to be enjoyable.

Personally, I felt the best of Dead Rising 3’s writing came out in the small side quests and optional psychopaths. Especially with the psychopaths, the writers let go of any sense of seriousness that had to be maintained in the main plot and just went wild with the writing. The result is a memorable cast of characters that are hilarious, crude, and generally unhinged. 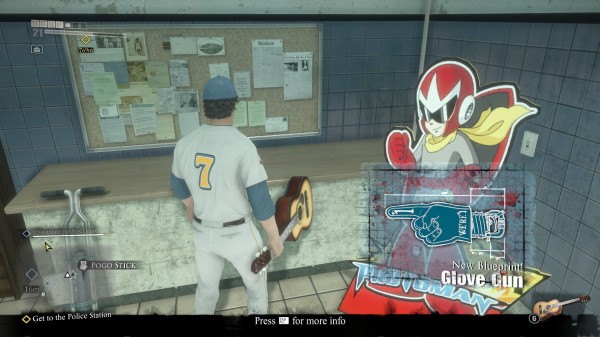 Dead Rising 3 continues the formula of providing players with a huge variety of everyday objects and weapons to butcher hordes of zombies. Thanks to advances in technology, these hordes have grown from small groups of zombies in a mall found in the original Dead Rising into mobs that will fill entire streets. The combo system has seen expansion and significant change since Dead Rising 2. Long gone are the crafting benches that littered Fortune City. Nick can now squat down and craft combo weapons where ever he pleases, although he can be interrupted by zombies looking to pick a fight with a vulnerable target. The combo weapons have multiple stages, with their ultimate versions requiring six or more items to craft. Additionally, two vehicles can now be welded together to create a variety of combo vehicles that are normally armed to the teeth. For all these combos, Nick will need to acquire blueprints for them by either scavenging the plans around Los Perdidos or levelling up. Some plans are hidden in buildings that are unlocked at a certain point in the story, which will drive completionists a bit crazy. 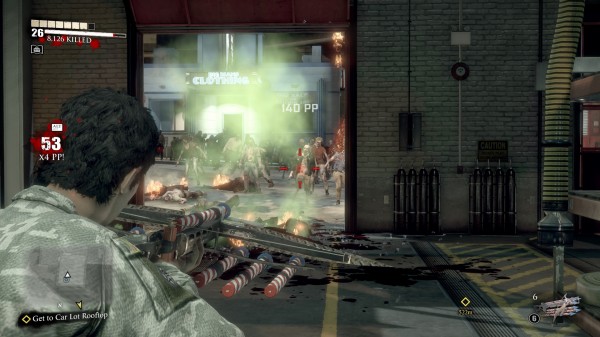 I believe Dead Rising 3 takes the combo system in the right direction. Creating combo weapons is no longer a chore of collecting the right items then hauling them to the closest crafting bench, dodging zombies all the way. On the other hand, combo weapons become the main form of damage in Dead Rising 3, making the run of the mill items found scattered around the world more of an emergency fallback plan or an amusing time waster. Mixed with the ability to spawn in any weapon previously equipped in the game at weapon lockers in safe houses, the combo system has rendered all but a small handful of regular weapons obsolete. Some may mourn the change, as part of the series’ charm is the weird and wacky items wielded as weapons, but I feel the strange combos Capcom has dreamed up make up for the loss. The one thing I hope will be addressed in future iterations of the game is the sorting for the weapons blueprints. After a while, there are so many blueprints, it becomes difficult to find specific blueprints without a lot of scrolling around. A sorting or filter function is desperately needed to ease navigation. 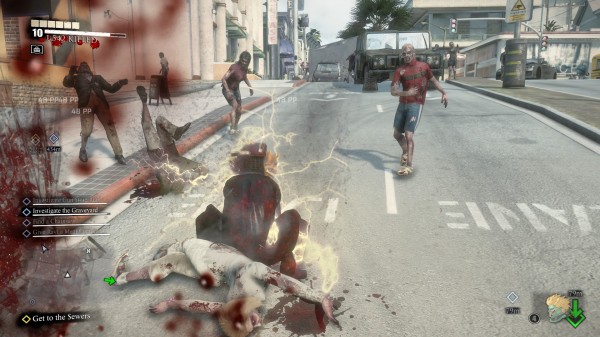 Firearms have also seen a major change in Dead Rising 3. Guns were a precious commodity hoarded for psychopath battles in previous games. I was thrown off when I encountered a light machine gun within the first fifteen minutes of the game. I soon discovered that firearms are liberally scattered through Los Perdidos. They are still a necessity for battling psychopaths, but their higher numbers means pouring points in ranged skills and opening fire on zombie hordes is no longer a huge waste of resources.

The quest objectives are a bit of a mixed bag. The main quests are incredibly fun, with some really neat gameplay mechanics. However, the vast majority of side quests boil down to boring fetch quests. The psychopath battles serve as optional boss battles and are much more enjoyable. I did notice their difficulty levels vary wildly, with some requiring Nick to use all the ammunition in a shotgun to complete, while others required practically the entire inventory. It would have been nice to see some more emphasis on melee combat with the psychopath battles, as most were best tackled with an inventory full of firearms. 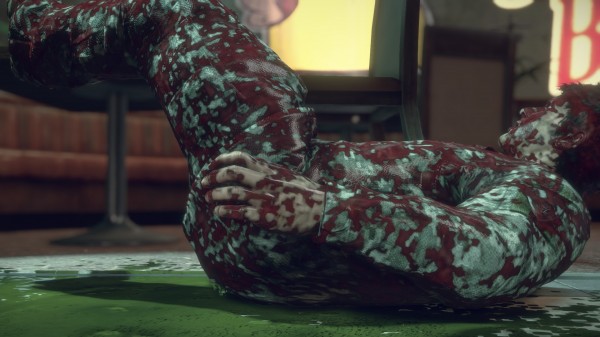 The co-op system has seen some improvement over past titles. Now, matchmaking can now find partners based on personal play styles such as completionist, casual, and hardcore. Though the follower AI has improved compared to previous titles, co-op players make much better partners as the AI followers are still a bit too stupid to be little more than a hindrance that provides a little extra damage on some occasions. 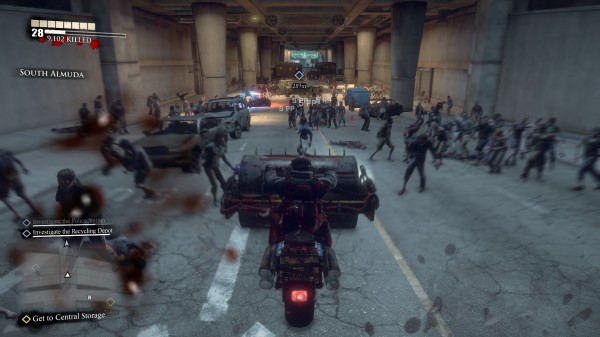 The visuals in Dead Rising 3 is an absolute minefield. From a purely visual perspective, the higher resolutions have been good to the game. The Xbox One version only ran at 900p and the PC port supports much higher resolutions. The game is absolutely beautiful, with a well crafted city. There are plenty of different zombies in crowds to ensure the game doesn’t feel like an attack of the zombie clones. Capcom Vancouver has gone to great lengths to provide lots of visual options to fine tune the graphics.

But that’s where things get messy. Whether you want to blame things on poor optimization or simply a really taxing game, Dead Rising 3 does not run well. The system requirements are high, but even then the game suffers from serious frame rate dips from the most powerful of systems. The game is locked at 30 FPS, but can be uncapped with some tweaking with the system files. Personally I found the game performed worse with the frame rate cap removed. Frame rates absolutely tank during cut scenes, resulting in a jittery performance. I run an Nvidia GTX 670 on my test rig and I was forced to downgrade to an older driver due to random crashes that made the game practically unplayable with a crash every five to fifteen minutes. Dead Rising 3 is in desperate need of fine tuning, tweaking, and patching. 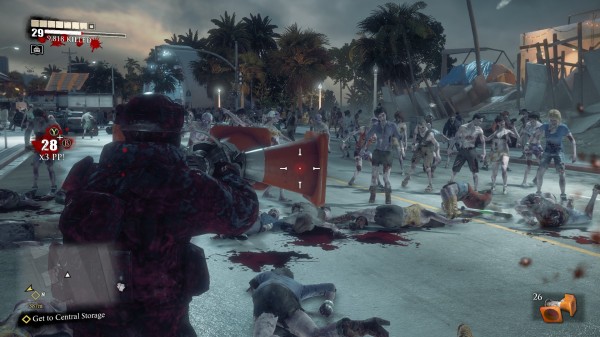 Dead Rising 3 lives up to its big name status, providing an AAA audio experience. The voice acting is top notch. The soundtrack is moody and tense with a nice industrial flair. Capcom Vancouver does a great job of making sure the right tracks kick in just at the right time. The sound effects have also received a good deal of attention. I’m really splitting hairs with this minor complaint, but I do feel that the sound effects used for gunfire could use a little extra oomph. 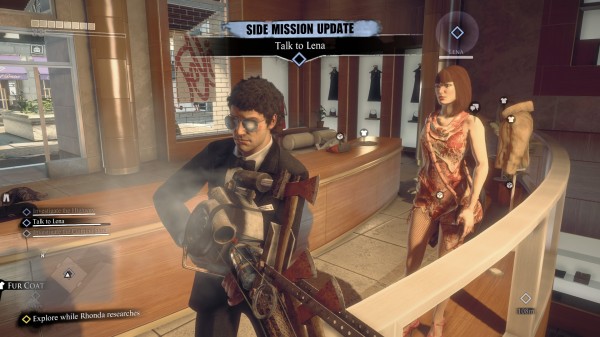 Dead Rising 3 is a great game crippled by a poor port job. The game won’t win any new fans to the series, but anyone who liked the previous titles will find Dead Rising 3 is an excellent addition to the series. General frame rate issues and system requirements aside, the port is desperately in need of patching. There are still rampant issues with crashing and the frame rate dips during cut scenes are unforgivable, even if they can be somewhat addressed with some patience and tweaking. If Capcom is willing to put in the effort to address the issues, Dead Rising 3 is an incredibly fun title that will be a must buy for many PC gamers.