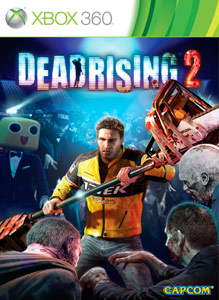 Story
“Several years have passed since the original Dead Rising™, and while Frank West was able to save America from a zombie apocalypse, the cause of zombification was not completely contained. In Dead Rising™ 2, continued zombie outbreaks have occurred throughout the United States and it is your job to stop them.” [ Via Xbox.com]

Five years have passed since the occurrences from the original Dead Rising, and now you are in a new city with a whole bunch of new faces. You play as Chuck Greene who must continue to supply Zombrex to his infected daughter, but Zombrex isn’t cheap and you have to go around searching for it. If any of you have played the original with Frank West, you can pretty much forget about him. The new main character and brand new story lets anyone pick this game up without having to worry about having played the first. For those of you who have played the original though, there are a few references that you will enjoy.

Gameplay
The game isn’t all about killing zombies, though a large chunk of the game requires you to cut through large hordes of zombies to get to where you are going. The main point of the game is to get zombrex for your daughter while waiting for rescue to arrive in 72 hours. 72 hours in game is about the equivalent of 6 hours in real life, but don’t think that it will only take 6 hours to beat the game. Dead Rising 2 is actually pretty hard, and may require multiple playthroughs in order to beat the game completely. There are tons of obstacles that you will need to overcome and tons of people to save. So even if you do manage to beat the game in your first playthrough, you can always return and save different people or find new secret areas or make new weapons to slaughter the zombie hordes with. The game is a semi-sandbox game, which means you can pretty much do whatever you want; however, you still only have the 72 hour time frame to play in so it isn’t completely open to you.

How should you go about killing so many zombies? Why not create a weapon, or a whole bunch of weapons. Throughout the game you will find weapons to kill the zombies, but the basic weapons are just the beginning. A bunch of the weapons can be combined to make even deadlier weapons. Scattered all over the place are weapons that have a wrench symbol on them, which means they can be combined with something else to make something better. The real trouble – and fun – comes from trying to figure out what else to combine it with to make the better weapon. Combo Cards are cards that tell you the combinations that make new weapons, and these are unlocked by gaining the level, finding the inspiration for the item somewhere, or by simply making the weapon yourself by accident. So while the game tells you a lot of the combinations, it is more fun to discover them on your own. If you do discover them on your own, you can get some extremely strong weapons really early in the game.

There is a system for leveling up as well, and this system is pretty similar to the first game’s system. Anything you do throughout the game will gain you PP (the game’s version of experience) and when you get enough, you level up. Leveling up gives you access to new combo cards, and also increases your characters stats such as health and speed. Almost everything about your character transfers over through playthroughs (Money, clothes, stats, level, PP, and combo cards); so while you start out the game level 1 the next time you play the story you may be level 20 with more combo cards, new clothes, and a lot more money to buy things with.

Co-op mode is a great addition Dead Rising and it lets you bring a friend in at any time to destroy the zombie horde together. A friend can drop in and out of your game whenever you want, and you can do the same for a friends game (if they let you in). The story progress only saves for the main player, and both players play as Chuck Greene, but the game becomes more fun and much easier with two players. Both players can explore the current area freely, and kill zombies however they wish. Co-op in this game is quite fun, but it is best to play the game by yourself at first to enjoy the complete experience of the games story.

Multiplayer is an added feature in Dead Rising 2, and in this case it isn’t just a slapped on bonus feature. Dead Rising is designed for singleplayer, but this games multiplayer is a good example of how multiplayer should be done. Terror is Reality (also known as TIR) is a gameshow that pretty much sets the foundations of the actual game. In fact, you start the singleplayer game by playing one round in TIR against computers. In the multiplayer mode you can play the game against real players and there are many more rounds, such as a round where you go around in hamster balls and hit targets, or another round where you use a moose head to fling zombies into a designated area. The multiplayer is quite fun and even lets you transfer your winnings over to your singleplayer game. On the other hand, there are connection issues and it takes a while for a game to be set up. Occasionally players will just randomly be kicked out, or you will be kicked from the game due to connection issues.

The graphics in Dead Rising 2 are good, but have a few lacking areas that cause the graphic levels to seem worse than they are. The area itself has stunning visuals and looks great, which presents a perfect place to explore and discover new places in. On the other hand, the textures aren’t awesome up close, but there is an easy reason behind this. In order to fit so many zombies on screen at once, the developers had to cut some things from the visual aspect of the game. These cuts include the textures looking poor up close, and the lack in graphics at this level help keep the frame rate from stuttering and slowing down. This is all good in theory, but the game still has some framerate issues during big slaughters and when you run into a lot of zombies. The issues aren’t severe but they are still noticeably there.


Overview
Aside from a few annoying aspects, Dead Rising 2 is an incredibly fun game. Once you get past the incredibly long load times, having to read most of the dialogue and having to run 10 miles to save; you can enjoy this zombie slaughter game in all of its glory. The game pretty much lets you do whatever you want, so it appeals to an extremely large audience. Want to just go out and kill zombies with deadly weapons, go ahead. Want to actually follow the story and get saved, you can do that too. The vast amount of options with such a small time frame leads to many replays of the game, but every replay is just as fun as the first. An added Co-op mode, and some pretty fun multiplayer modes adds even more replayability to the game. Of course, if you don’t like zombies and don’t care about killing thousands of them, this game is definitely not for you. For everyone else, what is better than slaughtering thousands of zombies? Nothing I tell you! Nothing!!
I give Dead Rising 2