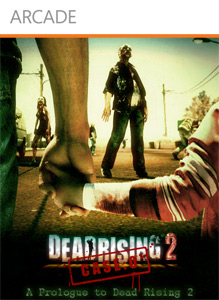 Story
“Set two years after the Willamette incident and three years before Dead Rising 2, Dead Rising® 2: Case Zero introduces main protagonist and former motocross champion Chuck Greene providing a link between the original game and the events that await players in the gambling paradise of Fortune City.” [Via Xbox.com]

The game starts out with a pretty long cutscene, followed by another long cutscene that explains pretty well what is going on without any need to have played the first game. Chuck drives up to a gas station in Still Creek to fill up on gas. While filling up Chuck gives his daughter a shot of Zombrex in order to keep her from becoming a zombie. They both enter the gas station to get some food, and the car is stolen. If you think that is bad, zombies then proceed to attack.

The goal of Dead Rising 2: Case Zero is to find another dose of Zombrex for Chuck’s daughter, and then get out of the town. Along the way you will uncover more story and be filled in on what is happening leading up to Dead Rising 2.

The game only lasts 12 hours in game, which is equivalent to about 3 to 4 hours in real time. While this may seem like a time limit, it isn’t that bad and fits well with what is going on in the game. Depending on your gameplay style, you may or may not beat the game in the allotted time (and pretty much loose) but you can always retry and luckily your money and stats transfer over to restarts so that the next game is easier and even more fun. The first time I played I got distracted with killing tons of zombies and pretty much wasted the entire allotted time building weapons and killing zombies. I didn’t even get the zombrex for Chuck’s Daughter. That may sound bad, but I just restarted and attempted the story a second time. I get distracted easily though, so I again didn’t finish in the allotted time.  I’ve played through quite a few times now and have enjoyed myself each time.

Zombies and Weapons, what more could you want? As chuck says to his daughter, “I can fix anything” and it seems pretty much make anything as well. Chuck has a pretty demented mind to think up some of those weapon combinations, such as the Drill Bucket which you plop onto a zombie’s head and after a bit of drilling the head is destroyed and the body falls limp to the ground. While there are normal items that can be used as weapons all over Still Creek, they are weak and ineffective. The basic weapons should only be used as last resort and you should always carry around a combination weapon for massive zombie slaughter. Scattered all over the place are weapons that have a wrench symbol on them which means they can be combined with something else to make something better. The real trouble and fun comes from trying to figure out what else to combine it with to make the better weapon. The combinations found in this game are just a small portion of the large amount in Dead Rising 2, but there is just enough here to wet your appetite for the buffet to be found in the retail game.

Audio & Graphics
The audio and graphics are supposedly the same as those found in Dead Rising 2. Based off of that, the graphics are pretty good and the audio is nice as well. The squish and thump of killing zombies, to the clank of missing a zombie and hitting a metal pole instead are all extremely appealing. Along with melee weapons, guns sound extremely nice as well and are quite nice.

This isn’t exactly the place to put it, but this is probably the first game where I’ve been annoyed by some pointless programmed AI. There is a guy on the roof that you meet later in the game that tells you where other survivors are for you to save them. He passes time by randomly shooting zombies that are located on the floor; problem is that if you are killing zombies there he will occasionally shoot you which is extremely annoying. He hass even shot me a few times while I was on the roof talking to him.