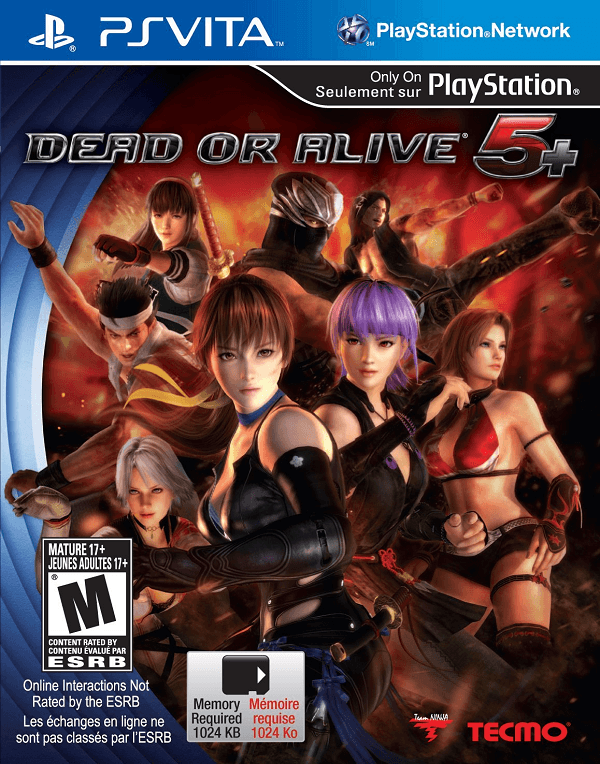 Overview:
With portable gaming handhelds growing more powerful, developers have a number of options when they bring games to market. Of course they can also choose to release a “Plus” version of the game as well. That is certainly something that Tecmo Koei has grown fond of ever since the Vita was released and while the original Dead or Alive 5 was released on consoles a half a year ago now, fans have another opportunity to pick up a Plus version of the game. The question is, has DoA5+ made the jump to the Vita successfully?

Story:
Now it is worth noting that nothing in Dead or Alive 5’s storyline has changed, therefore those familiar with my original Dead or Alive 5 review should read-on into the visual section of the review.

Rather than simply feature an archaic arcade mode that only offers a small video for each character in the game, Dead or Alive 5 supports a full blown story mode. Gamers will go through the story mode playing as a number of different characters in the roster, usually fighting around three to four fights which each one before switching to the next character in the story. 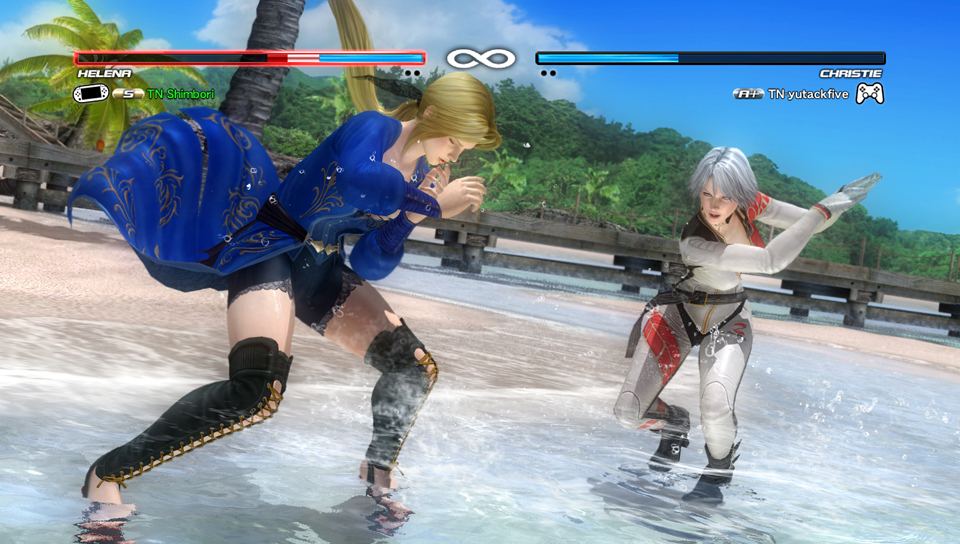 While not very long in length, DoA5+’s storyline does a relatively nice job bringing most of the characters together and keeping the various character relationships that have been built up over past releases intact. It is also worth noting that the two new characters, Mila and Rig are also present in the storyline with the two of them woven into the existing story well enough that they don’t feel intrusive.

Visuals:
One of the biggest questions many have had for DoA5+ is whether the game’s gorgeous graphics and character animations would survive the jump from console to handheld. Well those concerns can mostly be put to rest because despite being on a smaller screen with less horsepower than a standard console, the game has suffered almost no drop in quality.

The environments and stages within the game appear exactly the same as they do within its console counterpart with all of the moving pieces in the environment, interactive areas where players are hit into the walls and the environment reacts and of course, Danger Zones that can cause extreme damage to players and often change the arena remain visually intact in what remains the most cinematic fighting game I’ve ever played. 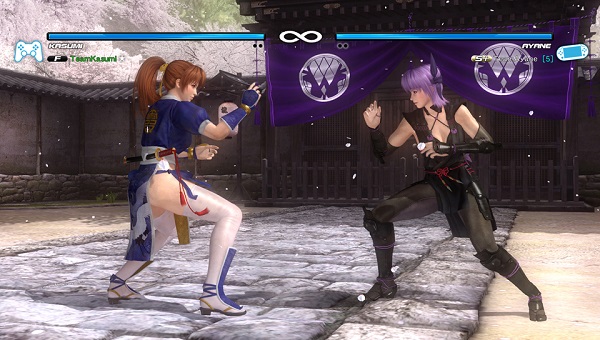 As for the character models themselves, for the most part the characters look unchanged visually but it is worth noting that they are not quite as detailed as before and can look a bit rough around the edges sometimes. Each character has a large number of unlockable costumes and each one is nicely detailed on the smaller screen. It is interesting to note that while the sweat and dirt system that makes fighters clothing/skin dirty or see through still remains, the outfit shift is more sudden while the sweat drips and everything else seem to have been removed to favor a simple sweat sheen instead.

Audio:
Interestingly enough, in DoA5+ players have a new option where they can customize the game’s soundtrack by selecting how songs will be played as you fight, like whether or not the stage’s specific music will play or the character’s theme song will play in the background. Also players can even choose what the theme song for each character can be in this mode, which also provides a bit of a jukebox for those who enjoy the game’s splendid soundtrack. 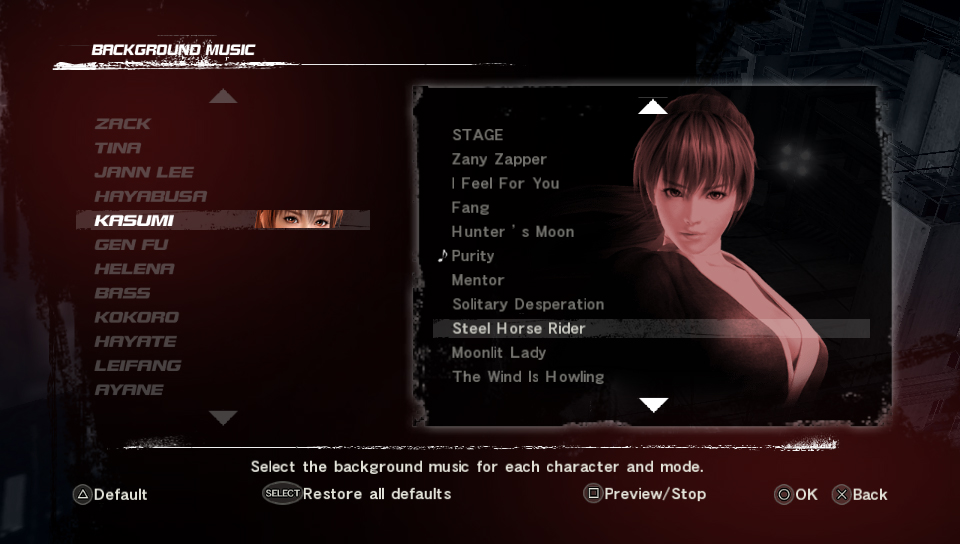 Gameplay:
In case you happen to be unfamiliar with the franchise, DoA5+ features a four button system where players will perform punching attacks with triangle, kicks with circle, holds (which counter blows with a throw)/guarding with square and throws with X. This makes the game a bit easier to pick up and play for newcomers thanks to the fact that there is no need to worry about a limb system, but there are also a large number of moves and attacks that players can learn for each fighter, with some fighters containing over a hundred different attacks for the more hardcore fighter to master.

Interestingly enough, unlike its console counterpart, DoA5+ actually comes with all of the game’s characters unlocked right from the get-go. This means that the guest characters from Virtua Fighter as well as the difficult Alpha-152 are immediately playable from the start, which only helps expand the game’s large fighting roster which already has seen the inclusion of Mila and Rig. 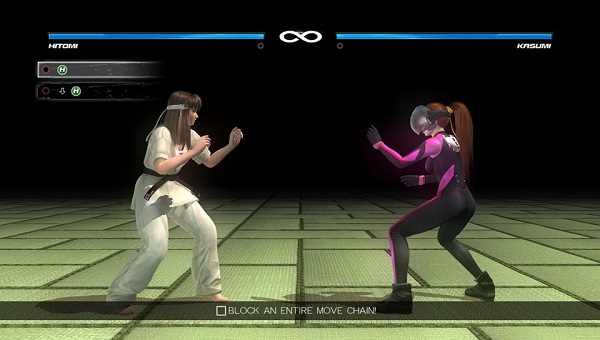 Anyways, DoA5+ has transferred to the PlayStatation Vita quite flawlessly as far as combat goes, however one game option has been removed while a few new ones have been added. For unknown reasons, the tag battle system has been removed from DoA5+ and this is a rather unfortunate removal because it also has removed the various tag throws and tag combos that were in the game as well as the option to play tag battles online.

However added into the game is a new set of training options that will give you every chance to become a better Dead or Alive fighter. There is the basic training mode, a command training option where you follow the inputs to perform the proper attacks and a mode that will explain everything in the game and why you are learning what the game is teaching you. For the more hardcore fighting fan there is also an advanced option that turns on the game’s frame data that provides every drop of detail for the moves being performed by the player at any given time.

The other added mode is only capable thanks to the Vita’s touch screen abilities and that is the Touch Fighting mode that places the player in first person to fight against an opponent using taps and swipes to perform moves. This mode allows players to get a never before seen angle and the fights can actually be a bit intense at times, however it is worth noting that while the touch screen fighting moves do work as described, these fights often feel rather rushed as players rapidly tap, swipe, press and pinch to defend themselves, block, grapple, kick, punch and more meaning that there is almost no flow to these battles. 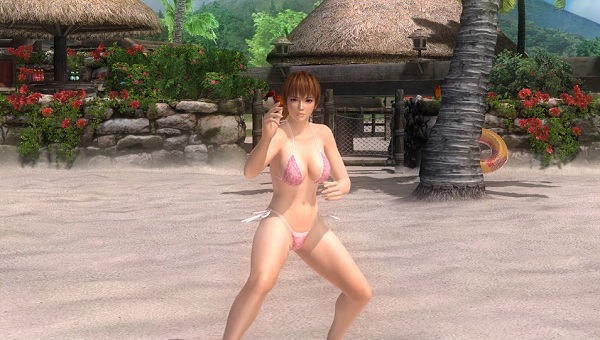 It is also worth noting that these tough fights are only exhibition matches and cannot be translated into any of the other modes such as Survival, Time Attack or Arcade. Anyways, while there are a number of male characters to fight against, it certainly feels like the first person touch fighting favors those who enjoy their fan-service as the game provides plenty of upskirts and more from this angle.

In fact, getting knocked down by an opponent often results with them taunting over you rather than continuing to attack which not only breaks the flow a bit but again offers the heavy fan service the title is known for, plus it sort of shows something when simply pressing the Vita’s left shoulder button automatically snaps a picture of the screen. It is nice to see that Tecmo Koei also gave players an option to either simply see their opponents from the waist up if the Vita is held horizontally or a full body view if held vertically, as it gives players more options. Outside of the touch screen fighting the touch screens are not used and I could not find any use for the back touch pad. I would be remiss not to mention that there is also the use of the game’s touch screen and that, with “DOA” physics turned on, to… ahem… move the female fighters’ breasts around in win/loss screens but hey… nothing wrong with being a bit licentious is there? 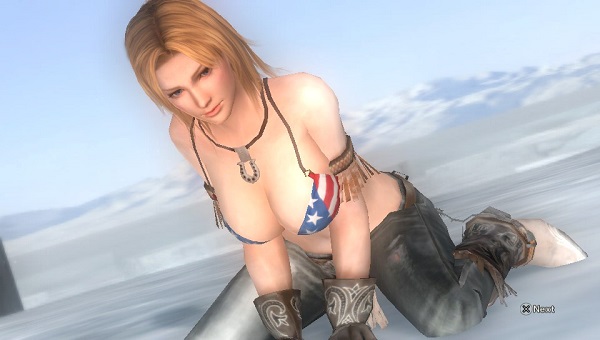 Anyways Dead or Alive 5 Plus also features the same type of online options as past games, though obviously lacking the tag option. Since this is the Vita, players have the option to cross-play with PlayStation 3 users and the platform of the fighter is shown under the player’s health bar. Anyways, the online netcode remains impressively strong on the Vita and despite playing through over fifty matches, there was never any noticeable lag or dropped fights. However amongst these matches it is worth noting that the online community is a bit sparse at the moment, though whether this will get better for a game that is six months old at heart, is unknown at this point.

Overall:
Dead or Alive 5 Plus has made an amazing jump to the handheld market and Tecmo Koei should be proud of what they did here. While the game’s visuals have taken a hit, they still remain great for the Vita and the game’s cross-play online netcode works flawlessly. While the loss of tag mode is barely balanced out by the lewd nature of Touch Fighting, there are still a large number of options for those looking to squeeze the most out of the title.

Being a near similar replica of Dead or Alive 5 with a number of additions and only a few losses Dead or Alive 5 Plus shines even brighter when you realize that you can now be a fighter anywhere thanks to the portability of the Vita and because of this, it is certainly great for those who may have passed Dead or Alive 5 up or those who are want to expand their fighting range to the world outside.