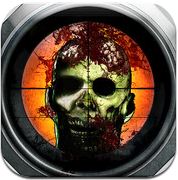 The Zombie Genre is taking over the world much like a real Zombie plague. Games like Dead Rising and movies like World War Z (check out the World War Z iOS game review here) are both key players in the “Zombies are awesome” society we’re living in so it’s only natural that when something is cool you’ll be seeing a whole lot more of it. Dead On Sight is the next zombie game to be released on the iOS but it will be nowhere near the last, it’s a cool little arcade, action, shooter that I feel a lot of people will like. 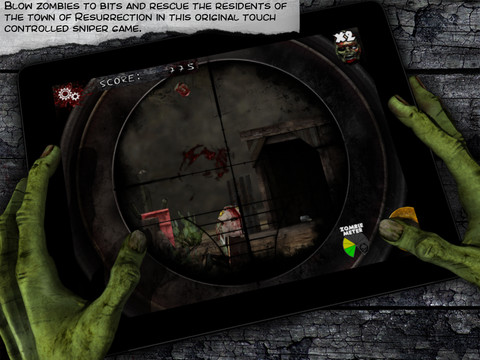 There really isn’t a great deal of story, there’s just enough to get you on your way and I suppose there’s just enough to justify why you’ll play the game. Basically you’re a guy called Irwin who seems as though he’s part of the local Police Force, you start off shooting cans off of a fence with your high-powered, combat sniper while taking bets from your police buddies, all of a sudden an alarm rings and Irwin is alerted to the fact that the dead has risen out of their graves and are now eating the others. The sheriff tells you, Irwin, to position yourself on a roof or some sort of high ground and basically leaves you to pick off the zombies one by one. Very basic, very simple and really it’s all you need for a game like this. The one little thing I liked was that the zombies actually rose from the dead and were not just some effect of a worldwide plague, that’s kind of new and fresh for something so old and rotten. 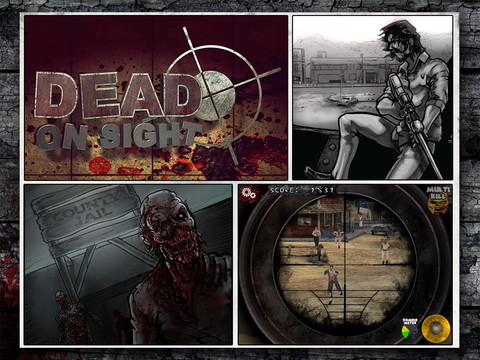 This game went in and out of greatness when it came to the visual side of things. The actual game play graphics were as basic as it gets, I would say that’s fine considering it’s on iOS devices but I’ve seen far better graphics on iOS games so I have to take a couple points away there but that’s not to say the graphics were super terrible, they were more than bearable I just think they could’ve been a little better. The actual scope of the sniper, when you look through, is nice and clean and looks the way it’s supposed to. The one thing that blew me away was the little 8 or 9 panel comic strips between levels that, pretty much, explain where you’re headed to and what you have to do next; they were drawn extremely well in a hardcore gritty style that really inspired me to bust some zombie heads. 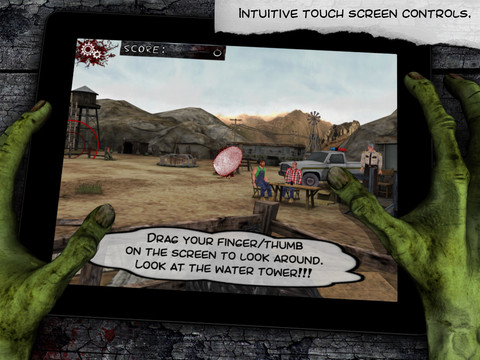 The music was great but repetitive. There was only ever music during those Comic Panel “cutscenes” and while that music was real hardcore it was the only piece of music, apart from the title screen, in the game. There’s a lot of guitar riffs and chord strums when you kill a zombie in a certain way which is really good because it pumps you up but there was one in-game sound that killed me everytime; the “Alert” siren. Everytime a zombie is somewhere it shouldn’t be, like a door or ladder, this great, honking, alert sound is played which annoyed the hell out of me yet it did make me jump on occasion which adds to the all around gameplay style. 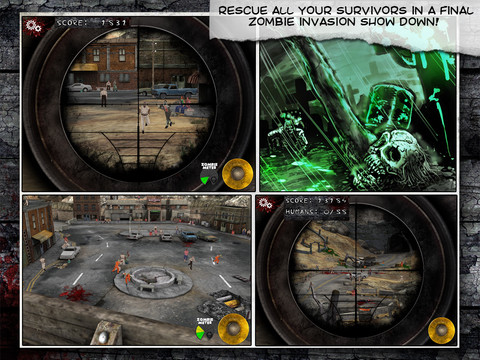 Basically Dead on Sight as like a low-end sniper simulator, you tap the screen to look down your scope, you pinch the screen to zoom in, you press the trigger button to fire, that’s pretty much it. Your character is stationary so there’s no running or moving to better sniping spots. Now in this game only headshots count, you can hit a zombie in the leg, in the arm, in the chest and some limbs will blow off but the zombie will NOT be dead, no sir! This made the game both hard and interesting, it kind of forces you to actually be good with a rifle instead of just spraying bullets wherever you could. The one thing I hated was the fact that if you fail a mission you return to the start of the game no matter how many areas you’ve been too, that was the one big thing for me because it only takes one misfire to reset the whole game and while some people may like the difficulty I wasn’t really a fan of it. There are also a bunch of achievements that you can unlock and a few little mini-games that you unlock through completing the achievements so there IS lasting gameplay, you just have to be good enough to complete the achievements first. 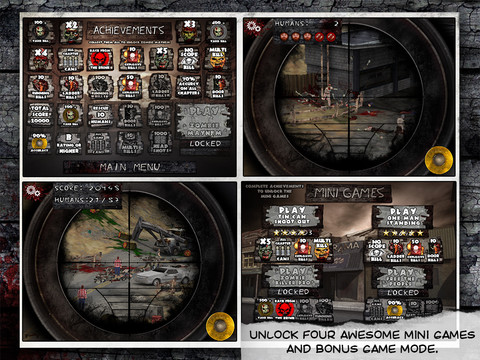 This game is great if you just want to have a quick play while you’re waiting for something or while you’re on a break from work, it doesn’t take much thinking because, once you get good at it, it’s all about the reaction and anticipation of an enemy. If you love the zombie genre or even if you just love shooting and are a big fan of Sniper Rifles, it does a good job of emulating one so go ahead and pick up the game, for $1.99 you really have nothing to loose by trying out this game you may love it.