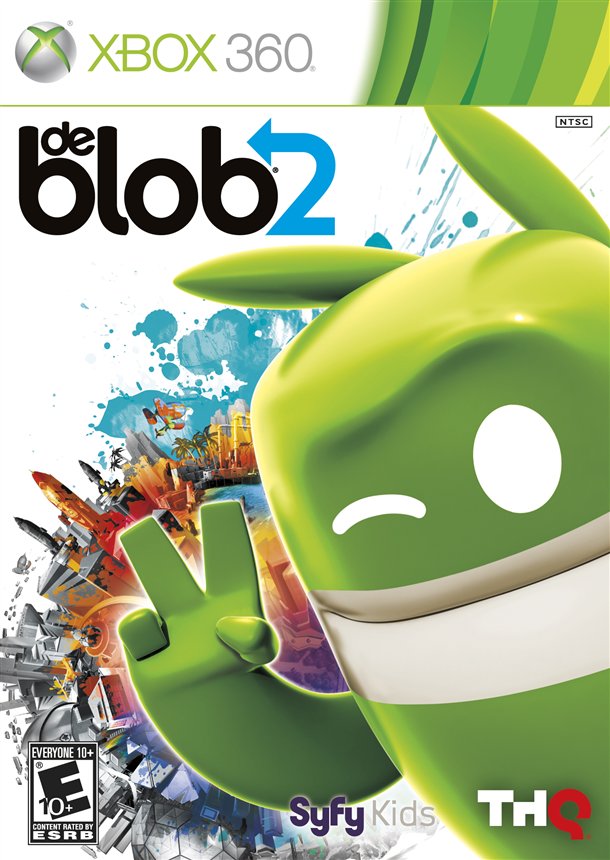 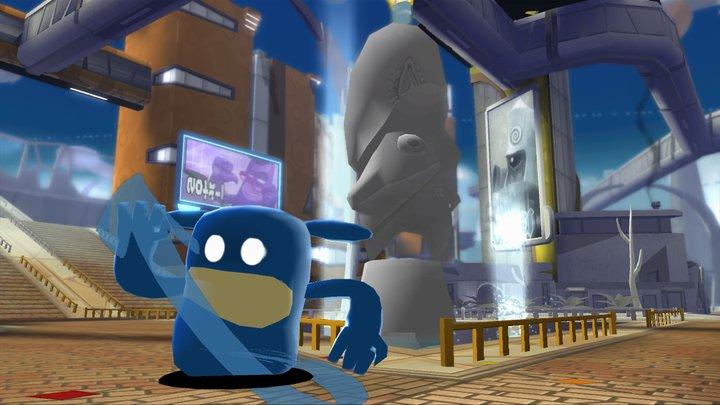 Two years after we seen de Blob’s impressive release on the Nintendo Wii, de Blob 2 has been released across all home consoles and the Nintendo DS. With a brand new story and a shiny new coat of paint, this title really does offer quite a lot for the franchise to move forward with, even if the steps forward come with a couple of moments of minor frustration. I will get to all that in a moment, but now it’s time to get this review underway, so without further ado, her is my review for the Xbox 360 version of de Blob 2.

Story
If players who got a chance to experience the first de Blob title, Comrade Black lead his INKT Corporation to take over Chroma City and deplete all color and happiness from the land, only to have de Blob become a new hero for the Raydians, restoring color as he put a stop to Black’s evil schemes. In de Blob 2, the plot is a close to the first, but now Comrade Black has disguised as Papa Blanc and has started reeking havoc in a new location, Plasma City, brainwashing most of the citizens and taking the cheer and color out of the land. Now it is up to de Blob and a few allies to start a revolution and bring Plasma City back to life with the color and life it once had. 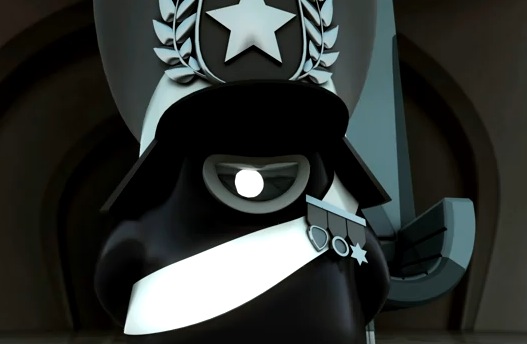 The story may sound a bit simple, but the part of de Blob 2’s charm is the way the story is told. de Blob 2’s plot boils down to the classic tale of liberation and starting up an uprising to take back the Raydians to their previous way of life. It is full of political context, even with a “news ticker” on the bottom of the screen with humorous messages of angst against the uprising de Blob is creating while you bring the world back with color, but nothing ever feels that serious as all the characters are filled with such a goofy charm that everything feels light-hearted and fun. Cutscenes are like watching a movie and tell this tale with style while showing up quite frequently between each area. Most platformers do not go into detail as much as de Blob 2 with a plot, but that is what made this title special to me. It makes you feel like you actually have a purpose to make it from point A to point B and I actually wanted to get further just to see what was next for our very colorful protagonist in the game.

Gameplay
The same concept of coloring the world from the first title is back this time around, but now in beautiful HD. de Blob’s main objective is to restore the world with color, and he does so as he works like a living paint bucket, absorbing color from paint pools, enemies, and several other methods to roll into a platform, filling each piece with vivid color upon contact. Certain platforms require certain colors though, and to achieve this, de Blob must carefully roll into each area as well as mixing colors on his own body to properly change each platform. A lot of the gameplay is made up out of missions that you must perform for the inhabitants of Plasma City where you must perform tasks such as liberating Raydians or taking on a tough foe to break an area free from it’s colorless form. 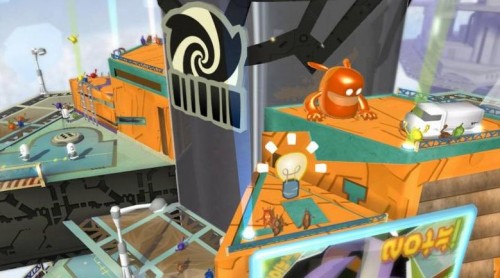 Of course performing like a true sequel should, de Blob 2 is filled with new gameplay mechanics which breathe a fresh new feel to the otherwise simple core gameplay such as new dash attack, which is used to smash through obstacles or enemies. As you progress, many new abilities are introduced which can be purchased with “inspiration points”, the game’s currency system that can be found all over the various locations. Though these are mainly used for making your Blob stronger, they are actually a necessity and serve a purpose as the game’s challenge rises. Each location also features many power-ups which serve more of an environmental purpose to fit the challenges of a stage, such as turning de Blob into a magnetic wrecking ball, adding the ability to roll on magnetic walls or a hazmat suit which sheilds de Blob from spikes and flames. I really liked how the game is well paced on delivering these power-ups, as each are given out at just the right time so you are never left with the wrong ability at the wrong time, and as I would soon discover, perfect timing is a crucial element of the game as a whole.

At de Blobs colorful heart, under all the abilities and fine-tuned gimmickry, is a pure platform title. Everything, whether it be to smash enemies or cleverly turn a platform from a stale gray to full on color requires Blob’s targeting system and easy to use jump. By holding down a trigger, the player can map out a destination with the analog for precise movement. This performs well and usually gets the job done, but I had a few moments where the camera pulled away causing me to miss and have to try again. Many times, a group of enemies can be bashed one after another, leading to a chain. This is not only rewarding to receive with the feeling of accomplishment, but usually with a reward such as a time bonus. Platforming also performs differently when you traverse into a building, as the game then puts on a 2D side-scrolling face, with missions usually consisting of liberating a certain landmark or simply obtaining a certain item or shade of paint. A good portion of the game takes place outside where the player has a third person perspective, so this switch-up can lead to a whole different feel which is executed nicely. 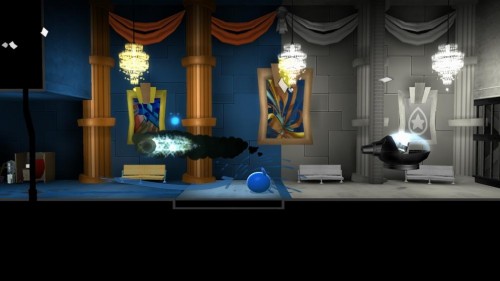 As I mentioned, time is a very important thing to keep an eye on within the game, which can be good or bad, really. While the timer does add to a challenge, I felt it actually took away from exploration. You see, when you start changing each world from it’s stale black and white area into these bright, colorful, full of life environments, you don’t get to fully explore your new creation. Instead, you are quickly moved to the next area. If that wasn’t enough, poorly placed checkpoints can result in a timer draining down and a lot of time feels wasted as you have to complete all of the missions which followed that checkpoint all over again. After completing a level, there is no timer and you can go back and collect things you may have missed, but it is hard not to want to explore the first time through. de Blob 2 is by no means a repetitive title gameplay wise, but having to completely redo such a large portion of a stage feels like you are being punished for enjoying the delightful atmosphere.

The game is a completionist’s dream though and patient gamers will be rewarded heavily with the many collectibles scattered throughout levels in which most of the achievements rely on to unlock. A two-player mode is included, which uses the second player (playing as Pinky) as more of an assistant to the main character’s role, helping stun enemies and gather collectibles in sight. There is also a split-screen co-op mode which adds a bit more replay to the overall.

Graphics/Audio
In my opinion, this may be one of the best examples of eye candy to hit a console. Each model for characters, colorful or not, is beaming with an easy to read personality and charm and all come across as very smooth and polished. The locations may be the best part of the graphics though, as actually completing the game is like unwrapping a big gift on each level. As you roll through, trees pop up, vehicles come to life upon touch, and the world as a whole quickly beams to life. This is what made this title so rewarding for myself, and I can imagine any gamer would enjoy watching such a intensely vivid atmosphere come to life as well. 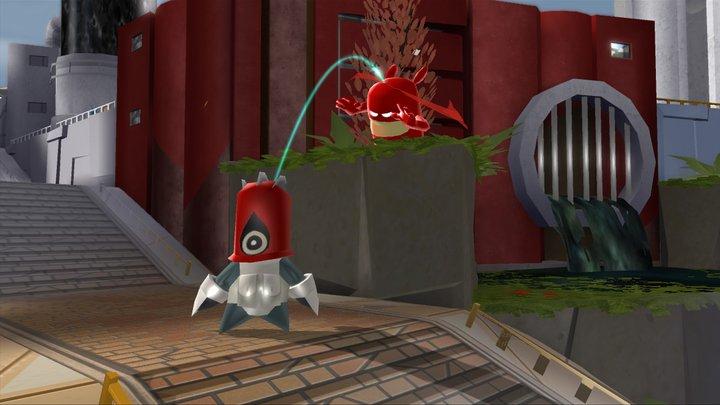 The music in de Blob 2 is very varied, but it all fits with the unique style of the game. Music changes based on whichever color you happen to acquire, ranging from a funky jazz groove to a more poppy tune and many other melodies throughout. de Blob doesn’t have a lot to say, but with the minor add-ins of laughter and grunts, his character is filled with even more personality and becomes easy to like right off the bat. The Raydians also have their own language that makes many specific inhabitants of Plasma City memorable and flow perfectly with the bright and colorful atmosphere.

Overall
It is obvious to tell that the developers put a lot of time and thought to level design within de Blob 2, and it shows with how well each stage is built to best fit whatever power-up or situation you may be in. Platforming is easy to perform and a blast with the ever-changing environments as well. Unfortunately though, players who want to get a fuller experience out of this world will have to do so in a second run due to the overly fast pacing in the game. There still is a wonderfully executed concept and a story that will keep you laughing the whole way through though, so this game succeeds just the way the title before it did, by bringing a fun, easy to play, and (even more so) visually pleasing title to consoles. de Blob 2 is one of those titles that is just a refreshing break away from the much more serious titles we see in the market today and does a lot right to be a top contender for a much needed mascot of this generation for the lacking genre of platforming as a whole.