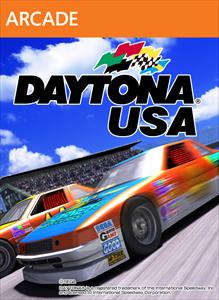 Overview:
Gentlemen start your engines. Daytona USA is back and races onto the Xbox Live Arcade at approximately 300 kilometres per hour. You can hear the roar of engines, that unforgettable chorus of “Let’s Go Away” and even some new additions tearing up some new ground. There is enough Daytona goodness to appease even the most wayward of fans, but is there enough to warrant a purchase? 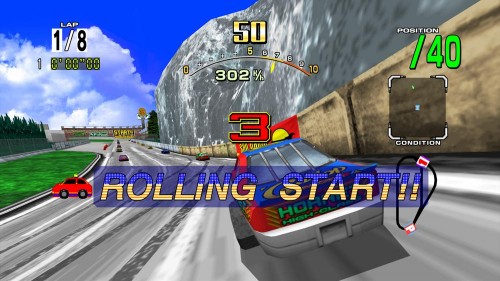 Beside a few new added features such as Challenges, Karaoke Mode and Online Multiplayer, there is little else in the way of new things to do. If you have road these three tracks before, there is probably little more fun to be had then to get a good old nostalgia kick for fans of the series.

Don’t get me wrong, the game plays great. But what is the point of rereleasing a game, so many people have already played without adding any substantially new content? The game is fun enough, but if you have played any of the other Daytona titles, this is going to be nothing new to you.

The online multiplayer community is a small one at that and even then there isn’t enough variety in the gameplay to make the online play feel any different than playing against computer players. I personally couldn’t notice any significant difference between them. It is a rather trite experience that is probably only for the truly “hardcore” Daytona USA fans.

Thankfully the saving grace of the title is the challenge mode, which at least adds some strong replayability to the title. That is until you complete all 30 challenges. After that you are most likely going to try and collect all the achievements, which all but 1 are easily gained.

The biggest problem with Daytona USA is that Sega essentially did a straight up port of the original with a few things added on. Unfortunately those few things added on do not prove to be big enough additions to push the title to anything more than a nice breezy summer’s road trip down memory lane. 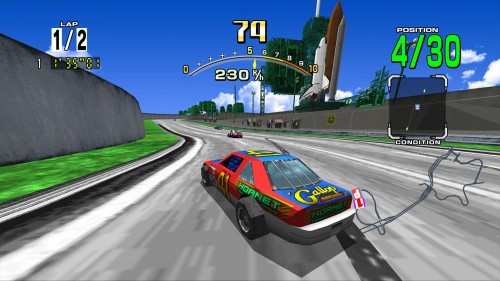 Visuals:
On an aesthetic level, Daytona USA does look a lot more crisper and visually appealing than it originally did. It is only a slight visual upgrade however. The title looks practically the exact same as it did back when it was originally release, only with better frame-rates and more shapely polygons. Environments are largely unchanged with like-wise only slight modifications to make it look good enough for this generation of gamers.

Graphically Daytona USA is a reflection of it’s gameplay, not much has really changed since it’s hey day in the arcades. For an Xbox Live Arcade title though, it looks good enough to get a passing grade.

Audio:
As you’d expect from Daytona USA, the soundtrack is absolutely stunning. So stunning in fact Sega saw it fit to introduce an ultimately unecessary Karaoke mode. The songs are all great but their really isn’t a great deal of lyrics to them to sing along to. “Let’s Go Away” for example, is largely the words “Daytona” and “Let’s Go Away” said repeatedly. It’s not particularly Karaoke material, but to each their own I suppose.

Each track is superb and is sure to stick with you for days after playing. Even as I am writing this right now I’m humming along the tune of “Let’s Go Away.” I do not believe anyone can really discredit Sega when it comes to music as they are 90% of the time on the money with game tunes and Daytona USA is no exception. 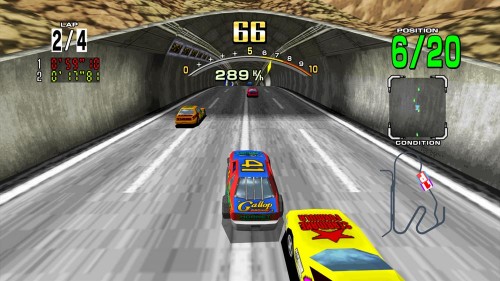 So if you are looking for a few hours of fun and perhaps the occasional pick up and play or if you are a fan of the series, Daytona USA would make a well spent 800 points, just don’t expect it to be anything more than a straight up port of the original with a few extras thrown in for good measure.