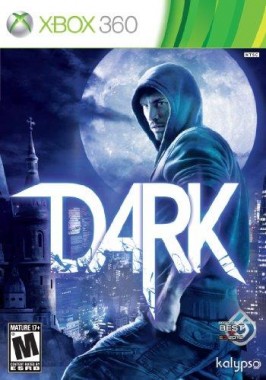 Overview
Back when it was first announced, the idea of DARK was something to get excited about. You see, I love modernized vampire flicks (aside from Twilight), but the console market has looked the other way for the genre, other than releasing a few duds over the years. Sure, Vampire: The Masquerade – Bloodlines had its time and cult following a good while ago on the PC, but this little market has gone untapped for the most part up until Kalypso’s latest. DARK blends together a stealth/action game with RPG elements, and attempts to grab the player with a tale of one man trying to find answers as he battles his bloodlust. How does it stand up? Let’s find out.

Story
Players jump right into DARK, taking the role of a newly turned vampire by the name of Eric Bane. Bane has no memory of how he turned or who his creator was, but soon finds out that if he does not drink the blood of his maker, he will be turned into a lifeless ghoul. This means that our motive for progression comes in the form of a rather solid plot, with one genuinely interesting protagonist surrounded by some one-dimensional allies and enemies. 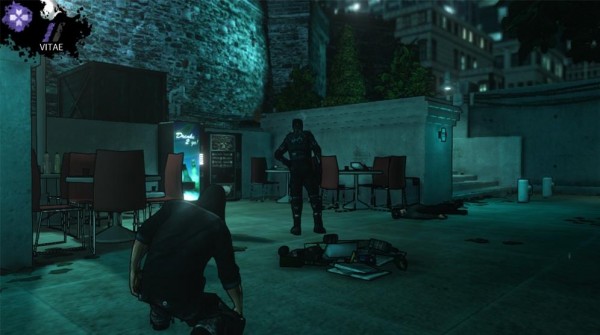 As the player continues on their path, DARK commits a sin against itself and stretches out its own plot to make the game longer. This comes obvious as the player must traverse to other locations in order to find specific targets, and while padding can work in something like Mario, it does nothing but fill this promising vampire tale with way too many filler moments. If you have an awesome gameplay experience in-between, filler is perfectly fine. I mean, look at Darksiders II and even Mario (in another castle…is she?). Dark sadly doesn’t have gameplay that comes across as satisfying though, and that alone makes the narrative feel shallow and underwhelming compared to what it could have been if there were more strong points.

Gameplay
If I could compare DARK to any other title gameplay-wise, it would be Metal Gear Solid: The VR Missions. I say that because DARK does not have much else going for it than stealth, and while an ability tree adds a lot to the experience, this alone can make things feel rather repetitive. Each stage is made up of several areas, where the player must sneak by enemies in order to progress. To do this, a good number of abilities have been provided at Eric Bane’s disposal, to which he can make use of to sneak through a stage unharmed. The gimmickry of being a vampire is taken further, as these vampiric powers are the only weapons at your disposal, but that really is what makes DARK feel unique to start with – so I see that as a good thing. Sadly, a lot of these powers come off as useless to the player, with some failing entirely during the most chaotic of situations. 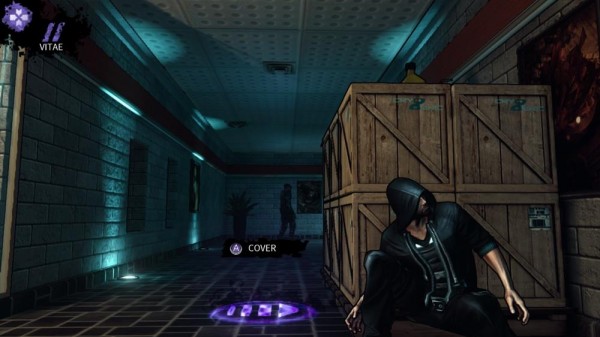 The Shadow Leap is your main power within the game, allowing the player to jump to another side of the stage at the press of a button. This means that if there are some menacing guards ahead, you could in theory jump behind them for a surprise attack, or leap to a ledge in order to get out of harm’s way. If only it were that easy. In order to execute this technique, the player must hit the shoulder button and control a reticule along ground to aim where you want to go. Every single time I would try to drag the reticule however, it bounced all over the floor and usually would teleport my character into danger. In a stealth title – even one with a super vampire of sorts – I don’t expect to be an expert in parkour, but not being able to master such a simple gameplay mechanic due to a faulty design was very frustrating, and one of the most glaring problems DARK has. 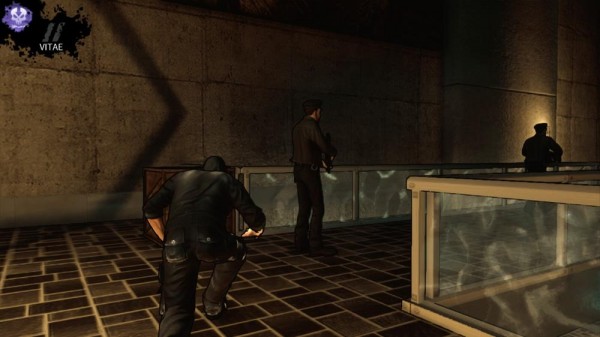 On the up side, the general core gameplay – while basic, is solid enough. The AI all have their set patterns that they patrol, and the player must sneak around or kill each target to get to the next. Bane has an ability wheel that he can utilize to execute special attacks and abilities to get around guards and thugs, which comes at a cost of Vitae. Think of Vitae as your mana bar of sorts, as it can be filled up by feeding on enemies, and empties out as these powers are performed. The abilities themselves include mind control, creating a distraction, or even regeneration for health purposes. There are plenty more, but many don’t prove useful due to the poor AI. In a lot of old stealth titles, we were used to a guard just staring at a wall for no reason whatsoever. DARK however has been released at a time where standards are higher, but still applies the archaic placement of enemies to each stage. This means that your general task for every stage will be to lure the enemy out, make a quick kill, and move on to the next. I even had some stages where I would intentionally step on glass to grab the attention of guards, and just by hugging a wall, I was able to take out ten as they trampled up stairs, clueless about their surroundings due to the dead bodies that would always grab their attention first. 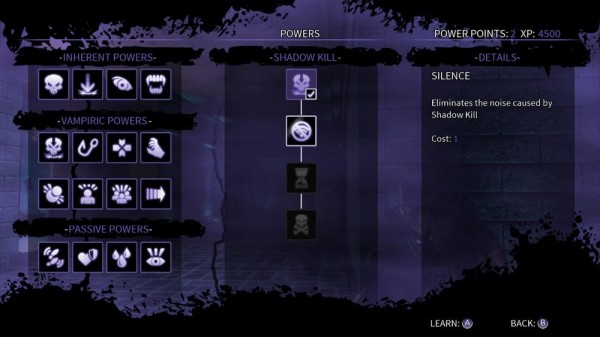 Even with the option to upgrade powers and attacks, DARK fails to deliver. It does not matter if the game is clunky or has a few problems. That does not effect this review in the slightest, as my favorite game of all time is a budget title by the name of Deadly Premonition, and it is full of bugs and we all know that fun gameplay can make up for the minor frustration. The problem is that DARK is a vampire game with a protagonist that does not fit his role. Eric Bane is slow and lacks any type of agility. That is acceptable if you are playing as Snake, but when you have powers that almost demand speed and precise movement, it is simply not good enough.

Visuals and Audio
DARK does do well when it comes to visuals, outside of the stages that is. The entire world and characters within are all cel-shaded, set in a dimly lit world during nights filled with neon lights and bright undertones. Yes, it is a pretty game to look at, but the animations are not nearly up to par with the scenery. As characters converse, mouth movements rarely match to the dialogue. The movements of characters during cutscenes and in the actual game are also stiff, making it hard to get behind any of the main cast as they attempt to portray emotion. Bane’s finest moments can be found when he is feeding or executing a kill as there are some nice animations to be seen there, but those alone do not cover up all of the same, bland design in the rest of the game. 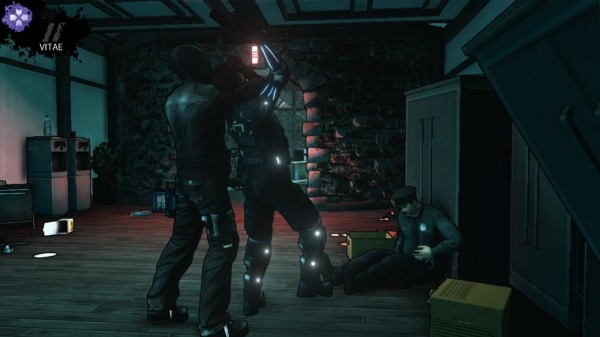 The voice acting is well done within DARK, as the actors seemed to have really tried to bring these characters to life, making the non-expressive animations even more damning to the final product that was released. There is a good group of haunting melodies during the gameplay as well, staying under the radar to keep the player on their toes, and being replaced with the more up-tempo tracks when Bane is discovered. It makes for some intense moments, but again, without being the complete package, this is yet another mark missed.

Overall
DARK is a game full of potential. The core gameplay engine works well enough, but sluggish character movements and the extra padding to the plot mess with the experience, making the player feel great restriction as they control what is supposed to be an all powerful being. Forget that bullets are killing vampires and all of the other plot holes. DARK is not nearly as enjoyable as it should be due to every room being a copy of the next, and every ability taking a hit due to the poor AI that require zero ingenuity from the player. Every now and then, a budget title will rise up and shock us, making us wait in angst for the next hidden gem. Sadly, DARK is not one of those games, but instead a hollow shell of what could have been something truly special.