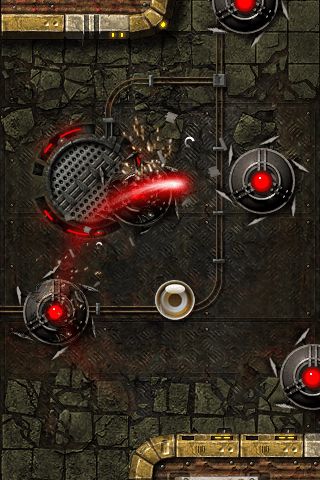 As it’s the second episode of Dark Nebula, of course it has the same goal as Episode One: Get to the end. This addition the Dark Nebula series includes twice as many levels, many more obstacles to get past, much better graphics and more to do in the game! Destroy moving objects after gaining the correct abilities, try to stay on the board without falling down a hole. Pay close attention to the game or you’ll end up playing for hours to get to the end. 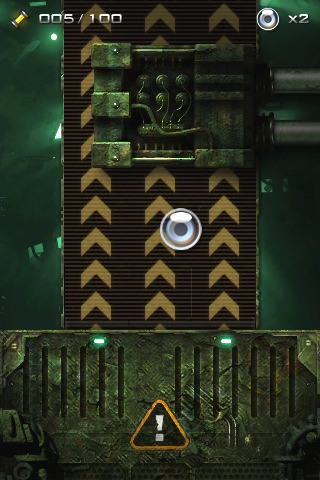 The music in this game is mostly sound effects. There’s so much quick-thinking action in this game that you hear sound effects almost everywhere you go. At times, there is a fast beat that makes you want to play more and it helps you get to the end. The sound effects are great and it works with the graphic environment perfectly.  It’s a very polished game and looks very sharp. Each obstacle you interact with makes it’s own sound and it goes great with the game. Whether you’re being attacked or you’re the one attacking, all the graphics and sound work smoothly together to create one of those games you can’t put down that makes you feel like you’re part of it. Each level improves with better graphics and different soundtracks for each section. It looks great, sounds great and it does both of those things together, flawlessly. You wouldn’t expect this from an app that costs so little.

Gameplay is similar to the first episode of Dark Nebula. You’re trying to get your orb to the end of the level. Now that sounds simple, until you run into moving objects that are trying to destroy you, sliding objects, doors, traps and more. The whole look and feel of this game proves to be amazing. It’s simple. All you have to do is tilt your device in a few different directions. What’s not simple is tilting the device in those directions and not falling down a hole or being beaten up by little spiky balls. Each level gets harder and harder and introduces more obstacles and characters every few seconds. You never know what’s coming next, which makes this game a lot of fun to play and you may find yourself playing for a very long time before you beat the level you started. Most of the time you have to act fast before you get knocked off the game path or get your shield destroyed by some crazy-looking moving machine. This episode of the game has twice the amount of levels as the previous one and it comes with better graphics, gameplay and a better response to tilting. It seems as if you’re holding the world of Dark Nebula in your hands. It responds to every movement and makes the gameplay a lot more fair than other labyrinth-type games. I would call this a techno-style labyrinth game with extra awesomeness. Once you get to the end, you move on to the next level and if you get a high score on a level, you can post it on the leaderboards! Trying to beat the top score may take a while, but this game can be played for a long time. This is no ordinary tilting game. This game has so many added things to it, that you forget you’re playing it and it feels like it’s part of you. 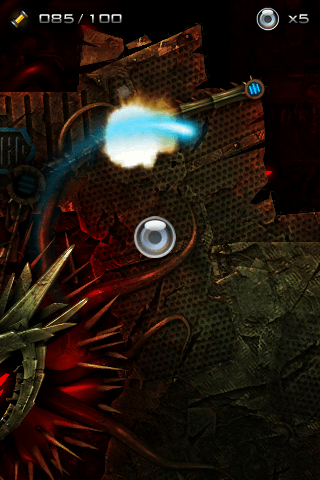 Dark Nebula – Episode Two is everything we expected after Episode One, plus more! It includes much-improved graphics, sound, gameplay and has better sensitivity to the tilting of your iDevice. If you’re thinking about buying a game that’s low-priced and worth every penny, this would be a great game for you! Replay value might not be that much, since it seems the game is based on suspense, but playing the whole game through would take a while. This game is a real deal for such a great price and I’ve been playing it for a long time, even while writing this review! All in all, this game is great. It’s fun to play, it sounds great, it looks even better and it’s something you won’t be able to put down without feeling like you have to go back and beat that level! Overall I give Dark Nebula – Episode Two a VERY GOOD rating of 9 out of 10 capsules, only because I don’t see much replay value.