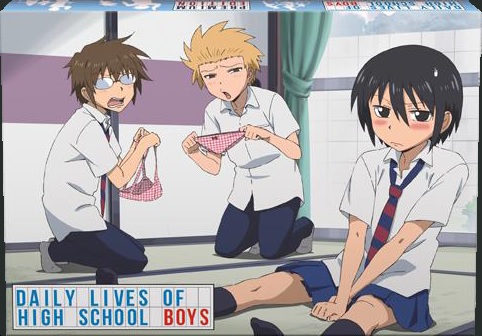 Overview
While some series are created originally, most anime series are adaptations of either a manga, light novel or visual novel. Of these adaptations 4koma style manga, manga that focus on short four panel gags with usually little focus on storyline, only receive anime adaptations every few years or are given simple five minute episodes. Even rarer is a release of one of these 4koma adaptations in the West, but that is the case with Daily Lives of High School Boys. Does NIS America’s risk of bringing such a uniquely styled series to North America pay off?

Story
Tadakuni, Hidenori, and Yoshitake aren’t special by any means. They are not especially skilled nor are they idiotic. Instead they live a rather normal life as they attend an all-boys high school. To that end, the story of Daily Lives of High School Boys is pretty much that, simply the daily lives of a bunch of high school boys as they experience plenty of random situations involving your standard classroom antics, awkwardly dealing with girls and their sisters, and simply passing time whenever they are out of school. 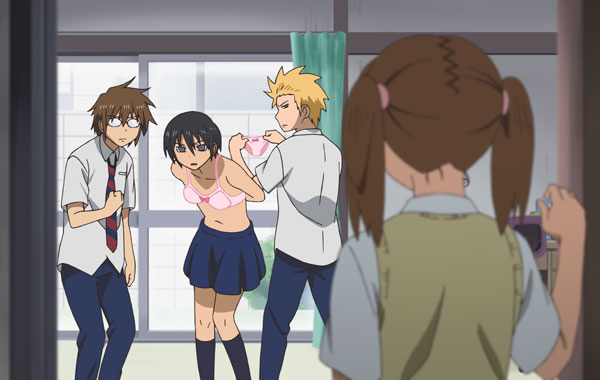 Despite focusing mostly on the three male high school students mentioned earlier, the cast is quickly expanded to feature a number of the boys’ classmates and even a few girls as well. There isn’t much in the form of development to be had for any of the characters in the series, which creates a bit of an issue later into the series as the cast explodes into numerous similar looking characters that are most easily recognized by their specific design feature.

To that point; there isn’t much continuation in the slightest. Sure time passes and there are a few running skits throughout the series and one episode that holds focus on one event throughout the episode, but for the most part everything is self-contained as an individual joke. I mention the word skit because that is exactly what Daily Lives of High School Boys is. It is a series that is broken up into numerous short jokes that can be anywhere from seven minutes long to less than two minutes in length. 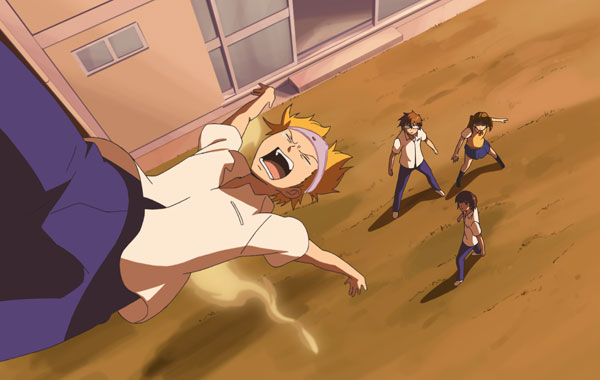 By placing itself with a rather simple premise that is not off the wall or mysterious and populating itself with outspoken cliché characters played for humor, viewers are presented a series that is meant to be played for gags only and for the most part that works just fine. Thanks to the nature of the series which divides itself into numerous skits per episode, the progression can feel disjointed at times but it actually manages to work quite well here.

The reason for that is because Daily Lives of High School Boys can be laugh out loud funny numerous times per episode. The colorful cast of characters and realistic, albeit exaggerated for comedic effect, situations that they are placed in as they mess around and live out their high school lives make most of the jokes hit home. 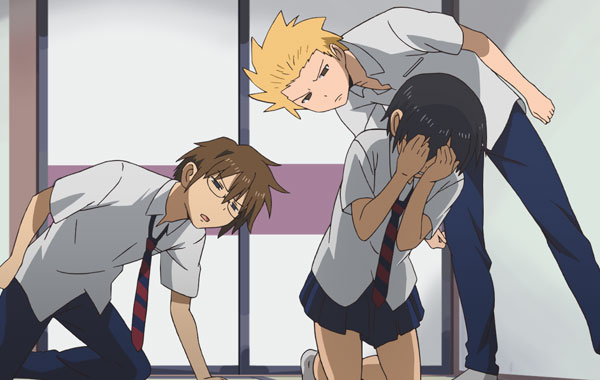 To top that off, Daily Lives of High School Boys is very self-aware of itself and there are numerous times that the fourth wall is broken as the characters talk about the series itself, the manga, the author, or even taking pot shots at itself for being greenlit for an anime despite being a school show about boys rather than girls. That being said, for every great gag there are also a handful that fall flat which is disappointing since Daily Lives of High School Boys is at its best when the viewer is laughing.

Visuals
Daily Lives of High School Boys has rather smooth animation but it is clear that the animation company provided the bare minimum effort for most of the series. More often than not, backgrounds are simple and even the character designs themselves are rather plain, which causes the aforementioned issue with remembering certain side-characters outside of their unique singular trait. 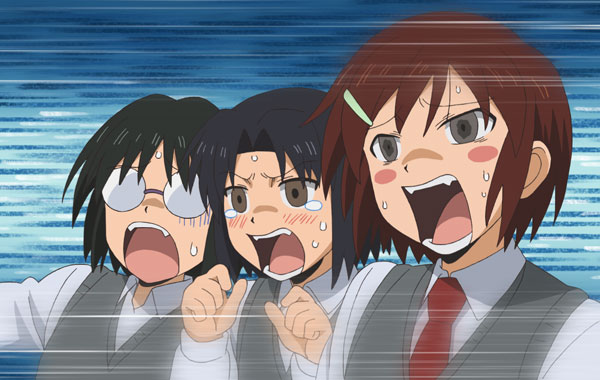 If anything, the only part that seems to be paid attention to are the facial animations of the characters which are often used in the gags themselves as the characters act stunned at their situation, usually playing it off for more laughs from the viewer. For the most part the series has a wide-range of colors and is decent looking overall, but never goes beyond being just okay.

Audio
Since this is an NIS America release, it is worth noting that there is no English dub for Daily Lives of High School Boys. While this is a problem for most series, some of the humor presented in the series likely would not have translated well into English which means that the English subtitles and Japanese dub actually end up being the best option for this gag series. 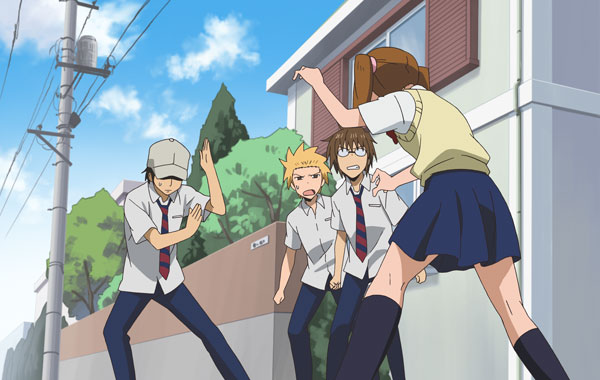 As far as the soundtrack goes, Daily Lives of High School Boys features a rather varied set of background tracks that usually are paired well with the nature of each skit and there are even a few insert songs placed throughout the series. As far as the opening and ending goes, the opening is “Shiny Tale” by Mix Speakers Inc. while the ending is “ohisama” by Amesaki Annainin. These themes are rather plain but it is worth noting that the ending sequence is quite hilarious when paired with “ohisama” so it is definitely worth checking out a few times.

Extras
NIS America has given Daily Lives of High School Boys the ‘Premium Edition’ treatment which means that along with the on-disc extras the release also comes with an oversized chipboard slipcase and a hardcover art book. As for the on-disc bonuses, there are extra skits that when combined add another seventeen minutes of content, clean versions of the opening and ending themes and trailers for other NIS America products.

It is worth noting that Daily Lives of High School Boys is another release which features horizontal artwork meaning that displaying the box will be a bit different from your standard NIS America release. As for the art book, it features character introductions to each of the repeat cast members, guidelines which go over each of the skits in each episode which are then followed by “Misc. Guidelines” which happen to be full pages of artwork of the characters in various scenes. This is then followed up by intros to the “Funky High School Girls” ending segment characters and a brief guideline for their ending skits, making it a nice, albeit light on content, art book.

Overall
When NIS America picked up Daily Lives of High School Boys; it seemed like a risky acquisition as a pure gag anime is something rarely brought over to the West. However by offering viewers an enjoyable, albeit similar looking, cast of characters, and hilarious gags that hit home more often than not, the series manages to overcome its simplistic art and lack of any focus to deliver a worthwhile series of boys doing random things in their lives as we laugh at their experiences.