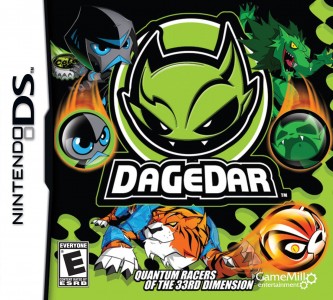 Overview
DaGeDar is a name that rolls right off the tongue, but before a short time ago, I had no clue what the a DaGeDar truly was. That name happens to be from one of this year’s big imports from Japan and lets players race little balls in a Hot Wheels fashion where the tracks feature loops and obstacles. It may sound a bit generic to a newcomer, but so far this little franchise has it’s own comic, a video series, and a ton of toys that players can collect and trade. To satisfy the growing fanbase, GameMill and Black Lantern Studios have now brought DaGeDar to the Nintendo DS. With all of the goods already in place, does DaGeDar roll into the video game universe without any bumps in the road? 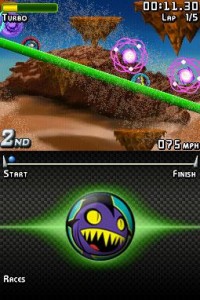 Gameplay
Think Sonic, add a touch of pinball and you have the formula for DaGeDar. While this title has a few tricks up it’s sleeves in other areas, it is first and foremost all about racing a computer opponent through a good number of different tracks. Once you choose your spirited ball of choice, the player will then be taken to a set track to speed through before the challenger finishes. Controlling the ball is easy as well, as the tracks resemble railing and are in 2D, so all that is needed of the player is simply to jump, boost, and move their bearing with the D-Pad. It only took me a few minutes to actually master the basics as this scheme is simplistic enough that a player of any age could easily pick up the game and jump right in without much room for error.

While the core mechanics are pretty basic, the clever track design is where the true challenge comes in. Tracks vary completely in appearance and layout, giving each a distinct feel and making nearly every race feel different from the next. Players must guide their ball along a set line and avoid hazards built into the road that can either cause slowdown or that can make your DaGeDar reset from a previous position. To win, the player must utilize the special offerings built onto the pipeline. This includes the likes of speed boosts that lunge you forward, cannons that can fire your ball into a new section, and orbs that can charge up the DaGeDar’s abilities. Thankfully, everything plays our solidly and speed is always at the forefront for all your treks around the track. 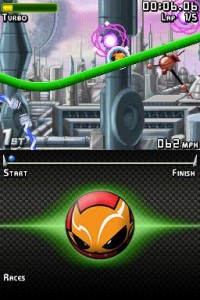 I went into this game thinking it would be easy to win every race because the main line of products are mainly targeted to the younger crowd. Interestingly enough, I was dead wrong on that train of thought though. Even on the Novice difficulty, the computer opponent can be insanely difficult. I rarely ever seen an opposing foe miss a beat in a race and there isn’t much the player can do to prevent an opponent from having a perfect run. You might think this kind of challenge would suck the fun out of the game, but I felt it had an opposite effect as the entire experience went from being rather bland to addictive and rewarding. Due to the challenge, it’s a good idea to run through tracks in practice mode and memorize where every boost and shortcut is, as knowledge and memory is key to being victorious against a devastatingly hard ball bearing. Just one wrong turn or slowdown can make it nearly impossible to keep up in a race, so again, this game requires both careful movement and strategy to succeed.

As you start to progress, more DaGeDar become available and each one of these feature their own perks that can boost your odds slightly as new worlds open up. There are over 100 types in all that can all be unlocked over time as well, adding a ton of replay value after you finish the main championship mode. If difficulty isn’t your thing, a time attack mode has also been included, where you must complete a set number of laps in previously unlocked tracks as quickly as possible. Also on board the cart is a local multiplayer mode, allowing those who are afraid of the strong witted opponents to race their friends. 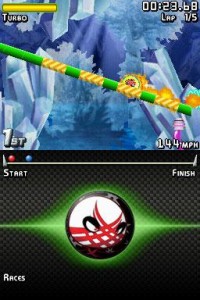 Visuals/Audio
Visually, DaGeDar is a very pretty game. Tracks are all vividly colored and each ball has their own looks and minor quirks due to the gimmickry of the franchise. Backdrops add to the level design as well, displaying the likes of space, jungle, and icy scenery in the background, which in turn makes the races feel different from the next. I almost want to compare the actual ball bearings to that of a charged Sonic though, as taking them through loops and hopping over broken paths can make it feel like your playing through a non-stop race as the blue wonder and the animations are fast and fluent throughout the entire game.

The soundtrack in this title was also well done. As I mentioned, I’m not too familiar with the franchise of DaGeDar, but if a sci-fi/electronic theme is what the developers went for (considering the whole “33rd Dimension setting), they did a fantastic job as these tunes are catchy and bode well in providing a nice, upbeat atmosphere for races. I did feel that some kind of individual sound effects could have been added in to individualize the balls, but that is mainly just a nitpick and the visual look proved to be enough to make each spirit worth unlocking.

Overall
As a single-player, handheld racing game, DaGeDar is one of the most difficult, yet rewarding titles I’ve played in the genre. That’s great news for the hardcore market out there, as the DS is obviously targeted towards much younger audiences and challenging titles are hard to find on the platform. Sadly, this is a franchise that younger gamers are going to be more interested in and unless the player has patience and an open mind to learn some strategy, frustration will become a common emotion for many who take these supercharged ball bearings for a spin. Even with that said though, considering the lower price-tag and the extra single-card multiplayer packed in, it’s still easy to recommend and is sure to be a must-have for any fan of the growing DaGeDar universe.