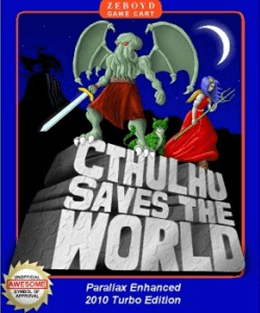 Cthulhu Saves the World is a quirky little gem amidst the myriad of shovelware in the XLIG.  This is not to say it’s perfect, but for a paltry $3 it’s pretty great.  For those of you not “in the know” Cthulhu is a well known entity born from H.P. Lovecraft, famed sci-fi writer.  The titular beast from the Lovecraftian universe, Cthulhu, is normally a giant malevolent god with the body of a man with an octopus for a head, green skin, wings etc.  This game starts out with a mysterious wizard sealing Cthulhu’s powers.  The player is then informed that the only way Cthulhu can return to his former glory is to become a true hero, essentially doing a full 180 on his dark past. 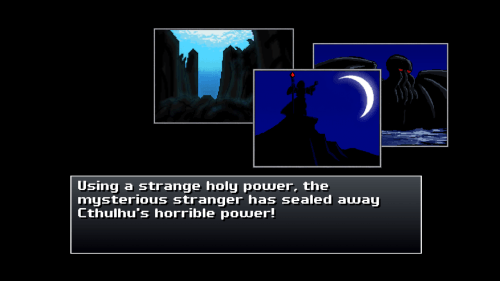 From the onset Cthulhu Saves the World plants its tongue firmly in cheek in the same way many low brow comedy games often do.  For example, Cthulhu informs the player that he was listening to the narration of the introduction to the game at an attempt to break the 4th wall and elicit a chuckle from the player.  One of the developers advertised the game by saying if you don’t laugh within 5 minutes of playing the demo he’ll be surprised.  Unfortunately, I didn’t find the comedy compelling.  I’m not saying it’s bad, but it’s not my preference.  The entirety of the comedy in this game feels like the developers are shouting in your ear, “HEY, YOU ARE PLAYING A VIDEO GAME AND WE KNOW IT SO WE ARE GOING TO REMIND YOU EVERY 5 SECONDS, OK?!”  Many NPCs are modeled after classic characters from RPG’s one could find in the late 80’s early 90’s, Cthulhu mentioning his eavesdropping in the beginning, etc.  You get the picture. 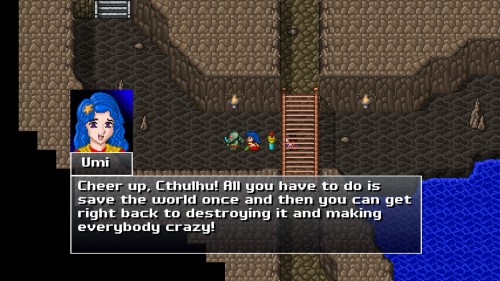 Luckily, the comedy is not one of the only reasons to get this.  As an RPG, it’s actually very well made.  Every time you level up you choose a bonus to receive such as increased health, higher strength, more MP, etc.  There are a plethora of methods to defeat your foes, spells, summons, abilities, special attacks.  A nifty little mechanic that deals with driving your enemies insane (an iconic sign of Cthulhu’s presence, always represented in anything he is in) with certain enemies receiving more damage while insane and a select few actually becoming harder while insane.  Your party fully heals after every battle, making only the battles the thing you need to worry about, not getting to town with only 1 HP left before the next random encounter defeats you.

While this is all great especially for an indie game, its indie roots really do rear its sometimes ugly head, much to the chagrin of a handful of players I’m sure.  Before I begin with this, know that this game pays homage to RPGs of yesteryear such as Final Fantasy 1 and the original Phantasy Star.  So perhaps the biggest shortcoming is that there are pretty much no battle animations.  You select an attack and nothing more than a simple slash appears over the enemy for a second.  Summoning a giant kraken to wreak havoc on the enemies does not play some elaborate and epic cutscene showing the creature emerging from the ocean to smite your foes, only a mere darkening effect washes over the screen for a second or two and then damage is applied.  Some won’t find this as troublesome at all and rightfully so.  However, I’m sure others will, I certainly was a bit taken back by the lack of production value but remember the price, $3, so you can’t complain.  You are able to instantly warp to any previous town you’ve been to.  Some might call this combined with the automatic full heal after every battle lazy and marking the game as too easy, which is understandable, but it’s really not that big of a deal.  The game is pretty good overall, it will definitely evoke a sense of nostalgia from the avid RPG player who has been playing RPGs for years.

The long and short of it is that this game is cheap, really cheap.  If this were just a normal XBLA game it would likely cost 800 MS points ($10), which I would deem too expensive for such a title.  Luckily, it is not, the game is only a mere 240 ($3) and for that price the game is totally worth it to the RPG enthusiast.  If you are looking for a quick fix of retro RPG and happen to have an Xbox 360, pick this up.  Support a fledgling developer in the hopes that this becomes a success and they can pour their talent into a much more substantial offering in the future.