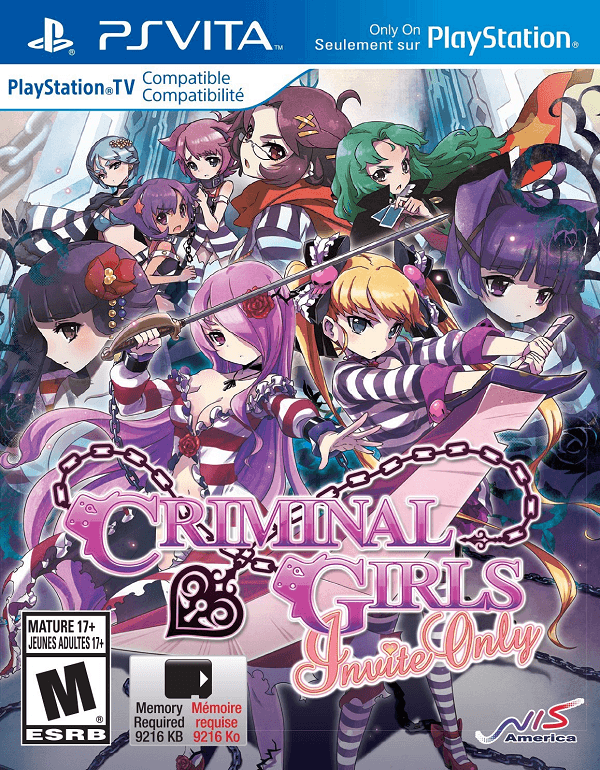 Overview
Often when a game is released in Japan many people joke that there is no chance that the game will be released in the West all while expecting the title to land in North America and Europe within a year or two. Other times there are games that are localized that come as genuine surprises and one of these happened to be Criminal Girls: Invite Only. With NIS America taking a chance on a game with a risqué theme such as this, is Criminal Girls: Invite Only worth picking up?

Story
In Criminal Girls: Invite Only players find themselves in Hell controlling a nameable protagonist. You haven’t died however, as it seems that Hell must be understaffed as they are tasking you with the temporary position of supervisor for a group of delinquent girls who have passed away at a young age. Due to the fact that none of these girls have really done anything terrible but still ended up in Hell, they have a chance to be rehabilitated and return to the land of the living. 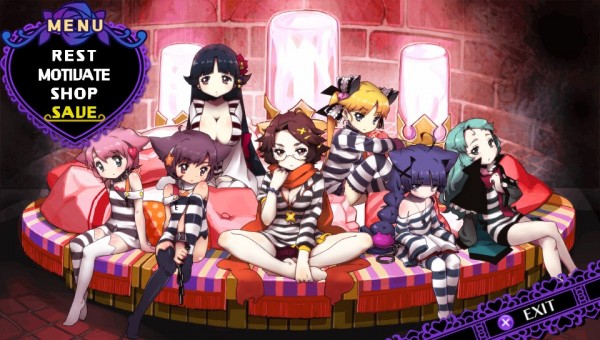 It is up to you to not only guide these girls through the stages of redemption and complete the challenges put before them. The only problem is, these girls are openly hostile with the player at the start and want little to do with you, let alone obey your orders. None of them get along with one another either except for a pair that starts to bond quickly due to knowing one another while they were alive and they all generally act like delinquents and the worst kinds of anime tropes.

The thing is, Criminal Girls: Invite Only plays the long game when it comes to trying and develop a story and unfortunately it happens to be a really slow long game. To not go into too much detail as to spoil it for those who actually decide to stick with the drawn out process of advancing through the game, let’s just say that the girls really do start to come out of their shells and start to shine later in the title. 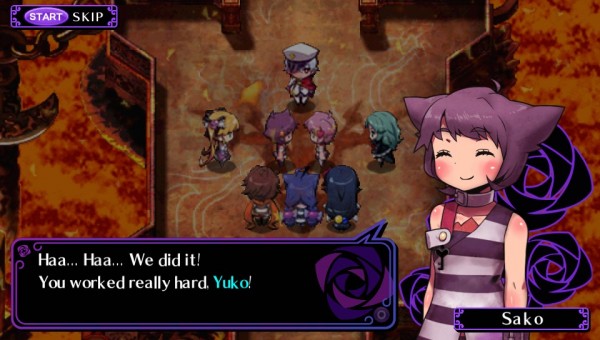 If you manage to stick it out, there are a number of revelations and actual character development to be had but this whole process takes way too long to get going. There is something to be said about a game that makes the player put in some effort to learn about what is happening and actually see the characters evolve and become better people, but the incredibly long and tedious (due to the gameplay) journey to get there will leave players in the dark despite there being a number of unique endings available to those willing to put in the effort.

Gameplay
Now at the core, Criminal Girls: Invite Only is a dungeon crawling RPG where players must travel through the various floors of hell searching for stairs to the next floor while finding treasure and resting points along the way all while fighting against monsters called Convicts in random encounters. These enemies appear at random most of the time but there are a number of areas that players will need to defeat a stronger Convict to advance. 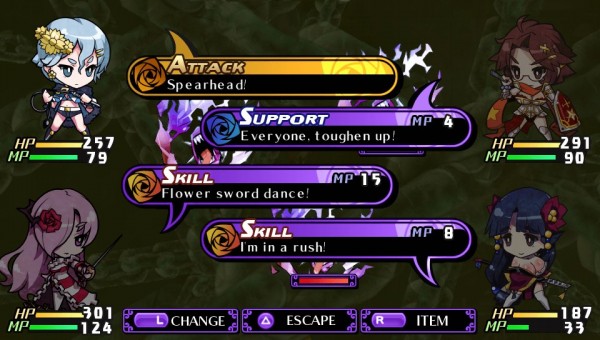 Players can have four active party members at any given time with each character fitting a specific role combat role. Now once you enter battle, you’ll see that this title is far different from other RPGs as you do not have direct control over the flow of a fight. At the start of the game these girls won’t even try and attack enemies as they simply do not want to take your orders. When you do manage to train them up a bit using the “Motivation” system that will be discussed momentarily, they will then engage enemies in combat but only at their choosing.

You see, at the start of every turn each of the four party members will suggest an attack plan that ranges from teaming up with another character to attack twice or using a specific skill. This means that there are plenty of times that you’ll be stuck with all four characters suggesting awful attacks and while it is incredibly useful that every turn you can use an item or exchange a party member without penalty, this also leads battles occasionally being far more difficult than they should be. 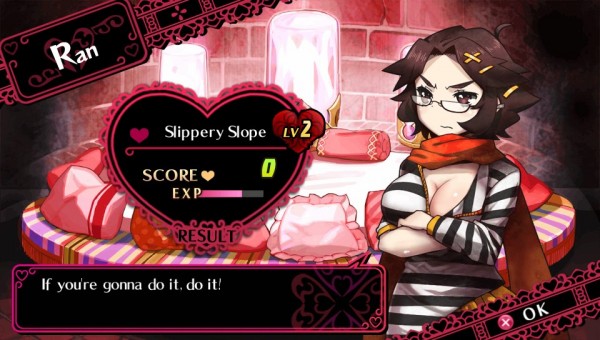 As you battle and defeat opponents, you’re characters will gain experience points and level up and you will also obtain CM, which serves both as the currency for the game and also as a way to unlock skills by “Motivating” the girls under your charge. Whenever the player reaches a resting point they will have the option to Motivate the girls using CM and unlock various skills and power boosts through a, now censored, mini-game. As you progress through the game various motivational tools will be unlocked that have various mechanics but all of them use the touch screen and rear touch pad to complete the game.

These tools are used to rid the girls of “temptations” and the higher the stage of the discipline the more temptations will appear to be eliminated by the player using the touch screen. Some of the tools present involve flicking a switch on an electric prod, pressing a specific area to use a whip, and more while the fog obscuring the girl’s state of undress and cosplay outfit disappears. If a motivation is completed successfully there is a good chance that the girl will learn a new skill that can be used in combat and will begin to appear randomly in combat. 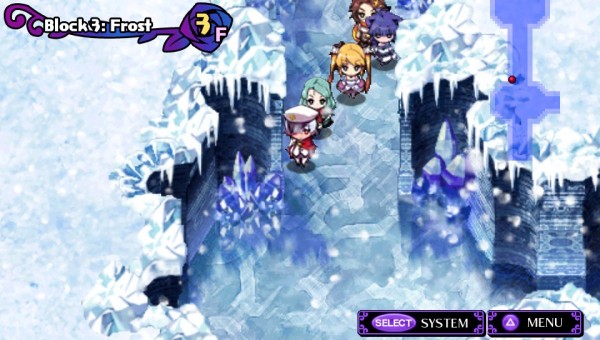 Now the thing is, Criminal Girls: Invite Only not only has a slow starting story it also has a slow combat system dependent and advancement based around extremely heavy grinding. Not only do players need to worry about grinding for experience points to make sure that their characters are able to stand up to the enemies that you encounter on higher floors, but the CM price for many motivations becomes absurd despite being an essential system as skills begin to easily outrank the standard attack options.

This becomes a problem on two levels as not only is there no way to fast-forward the combat that involves slow turn based attacks that prefer telling the player every detail, which is a joy during multi-target attacks, which makes almost every encounter at least a minute or two affair, but the mini-games begin to feel rather plain after a short period of time due to their repetitive nature.

Visuals & Audio
For the most part, Criminal Girls: Invite Only looks like an old school dungeon crawling experience as players explore some interestingly designed floors with character sprites featuring just enough detail to look okay but when you enter combat things take a bit of a downturn. In battle every character is shown as a chibi portrait of their usual self while the enemies they are facing are presented in the middle of the screen. Even the attacks and skills are basic looking, though considering the long nature of combat this is perhaps a good thing. 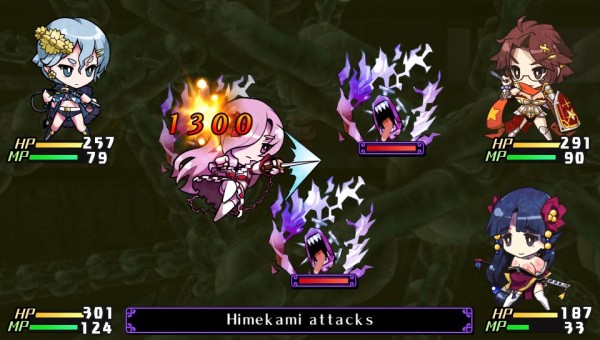 Where Criminal Girls: Invite Only looks its best is in the Motivation sequences. Now let me get this out of the way ahead of time, this title is packed with fan-service and girls in questionable poses that twitch as the player eliminates the temptations that appear during the mini-game. This means that this game is quite risqué at times but honestly the whole thing has been toned down heavily in the US release. While each girl will take a suggestive pose while wearing some sort of cosplay, barely any fan service is shown. Even at the highest levels of the mini-game where no fog was previously present, there now remains a completely opaque blob of pink fog obscuring anything that would have been shown around the waists and chests of most of the girls, though there still is a bit of fan-service for some characters. 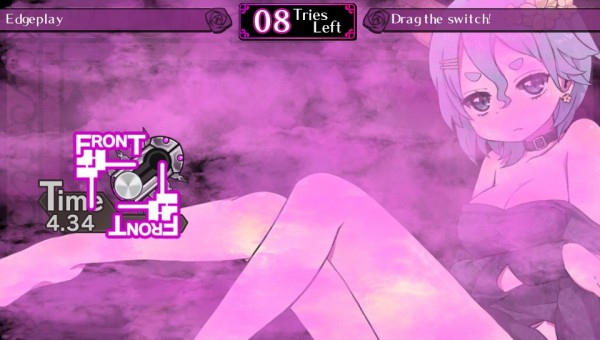 As far as the voice work goes, the title retains only the Japanese voice work which is fitting enough as the cast does a good job making their unlikable characters evolve over the course of the title while the background music is fitting, albeit forgettable. It is worth noting that the dialogue during the motivation sequences has been removed entirely in this release, making the repetitive nature of the mini-games even worse.

Overall
Criminal Girls: Invite Only exists in a strange middle ground. While the story does become something interesting it takes forever to get started while the unique combat is hamstrung by the extremely slow pace and heavy grinding emphasis. Everything that seems interesting about the title is hampered by either poor implementation or being repeated ad nauseam. Even the tempting feature for those who like some ecchi elements in their games has been minimized.

Criminal Girls: Invite Only was a risky risqué localization and those looking for something different in their RPGs may want to give the title a shot as, despite the drawbacks, it does have its moments. Unfortunately these moments come few and far between in a game that requires such a large investment of time for such a limited reward.