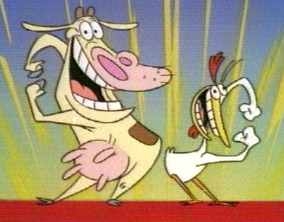 After breaking out of the animated showcase, The What A Cartoon Show, and standing on its own two feet for a successful season, Cow and Chicken returned with a second season. With the same cast of characters, same outrageous animation style and same bizarre plot lines; it was apparent by season two that Cow and Chicken had created a foothold in 1990’s animation and would emerge as a seminal series that would go on to influence a variety of other Cartoon Network animated series. 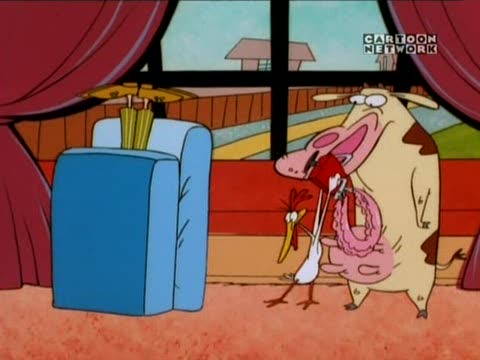 Rather than bore you with a tedious re-write of a plot overview, it is best if you read the review of Cow and Chicken season one to get an idea of the shows basic plot. Rather than just retell the plot, which at its core has not changed, the series is after all still about Cow and Chicken, I will look at the subtle ways the plot has changed. The format hasn’t changed from the first season; the show is still broken up into three segments, one of which is I Am Weasel. I think the problem I have with the plot of I Am Weasel is that except for I R’s jealousy of Weasel, the series has no consistency. In every episode both characters are rivals in some random profession. As a result, the jokes are always based on I R trying to foil Weasel. At least in this season The Red Guy adds an extra element, even if he is an over the top instigator fueling the flames of an already heated rivalry.

Cow and Chicken on the other hand, is full of consistency, to the point of repetition. I was a little disappointed to see that the episode Orthodontic Police managed to slip out of season one and into season two as well. Not to mention small in between episode segments where Chicken flies a bee or Cow makes a trampoline out of her tongue. Watching the season from beginning to end, or at least watching episodes in close proximity to each other, the use of repetition is obvious. While I have noticed that even animated series as big as The Simpsons reuse scenes, Cow and Chicken don’t seem to try and hide their recycling under new narrative, it is just out there in the open. However I am sure watching the episodes over a reasonable time span would help avoid this issue. 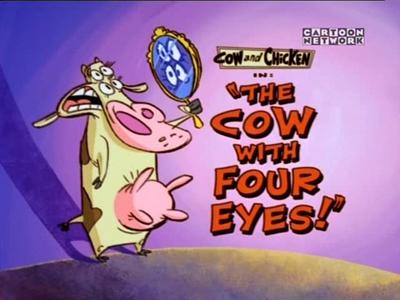 Throughout season two, Cow and Chicken stay much the same as in season one. While the two characters grow and their relationship is stronger and we learn more about them, their personalities are pretty consistent. Season two reveals some interesting character developments in terms of minor characters though. The characters of Mum and Dad have a few jokes revolving around the fact that they are both just legs. In the episode ‘Cow and Chicken Reclining’ Chicken pulls the top half of a man and woman out of a cupboard to which Cow comments “my science project”. A few other gags like the parents portrait above the bed being just of legs, and their feet on the pillows when they are asleep in the same scene poke fun at the fact that they have no upper half. While it might be weird, these jokes really work despite their ridiculousness. Perhaps because they have no upper halves, the writers seem to throw in a lot of gender confusion jokes. While the mum wears a dress and the dad pants, there seem to be a lot of jokes that are along the lines of “it made a woman out of your mum and me”. It’s an odd character development, but a development nonetheless, one that appears countless times throughout season two.

The biggest character changes in season two come in the form of character cross overs. I have already mentioned how The Red Guy appears in I Am Weasel now as an instigator character, essentially the same character he plays in Cow and Chicken. As well as this, Weasel crosses over into Cow and Chicken in an episode where Cow falls in love with Weasel after watching him on television and then pulls him out of the TV and into her world. Little cross overs like this work well, especially considering that up until that point I Am Weasel seemed mostly irrelevant to the series as a whole. 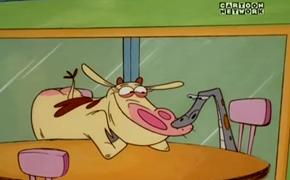 Season two definitely had an improved animation style. While the visual aesthetics of Cow and Chicken relies on really outrageous images, I felt as if season two pulled this off while at the same time avoiding the little off-model character poses that season one seemed to have. There is nothing overly spectacular about the visual styling of Cow and Chicken: it is quintessential of 1990’s Cartoon Network animations and works well within that framework.

In terms of the sound, voice actor Charlie Adler does another amazing job voicing almost every character on the series, with an amazing range in pitch and emotion spread across each character he voices. Despite this, I still can’t help but think that Cow and Chicken is a little too loud: there seems to be an awful lot of yelling and screeching in the series. 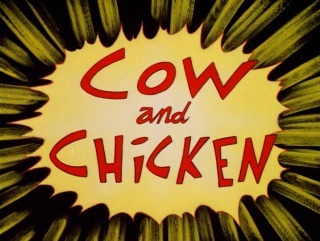 In terms of writing, I think Cow and Chicken season two is an improvement over the first series. While there are some lazy movements, such as a complete reusing scenes without changing the context of the narrative, these can be glossed over in terms of an over all improvement of story. I Am Weasel still sits oddly within the framework of Cow and Chicken, despite the few cross overs between them, and the jokes in that section wear rather thin. There seems to be more of an emphasis on improved animation style, which works well for the series, especially in pushing some of their really out-there jokes. A bit more of an emphasis on the minor characters, who mostly just serve as one-hitter jokes also works well for the series, as just Cow and Chicken might get a bit monotonous. Overall I would say I prefer Cow and Chicken season two to the first season, and can see why it held such influence over the Cartoon Network throughout my youth.