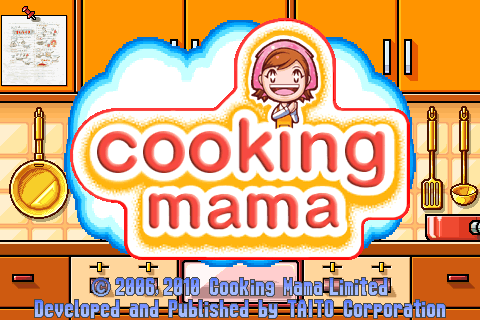 Graphics:
Cooking Mama’s graphics are nothing delicious but the bright colors and the design of Mama herself equal out to be quite an appetizer. The game is not graphically impressive as you cook your meals. Everything looks as good as you would expect on the iPhone/iTouch and rivals the Cooking Mama you will find on the DS. The close ups of the finished foods as you finish your recipe however are sometimes fuzzy and cooking exercises with the skillet can sometimes cause the ingredients to suffer from the activity happening, becoming rough in appearance.

This is relatively excusable thanks to the happy go lucky appearance of the rest of the game. Mama herself is very endearing in her cartoonish appearance, and all the actual cooking utensils and most of the ingredients look as their real life counterparts would. On top of that there are visual hints provided consistently through cooking. Lines are drawn on where to slice, or what actions to take and in the deep frying and skillet methods of cooking you will see a hint of color change as the items become cooked. 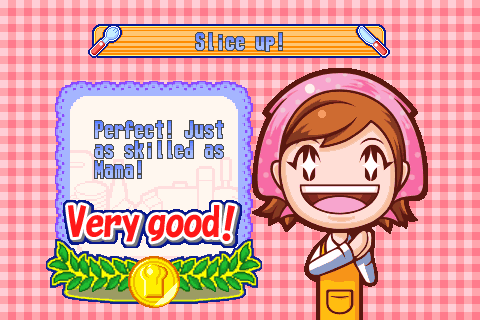 Gameplay:
Hmm what could a game called Cooking Mama involve? Is it cooking grenades? Nah of course not it is all about the kitchen and there are tons of activities and recipes to take advantage of. There are a total of fifteen different recipes, though only four are available on the start of the game, with the rest unlocking as previous recipes are completed.

There are two options to choose from to cook with Mama. One of which is the cooking contest which contains nearly every activity in the game in the form of a mini game challenge. They are a great way to practice out your cooking skills if you are having trouble with a specific action.

Speaking of practice; the other game mode is Let’s Cook which is essentially what Cooking Mama is all about. In this mode you have a selection of recipes to choose from and each one will have a specific set of mini games which you must complete in the order given to you; but then again you do not have a choice. In this mode you have the Make option and the Practice option. 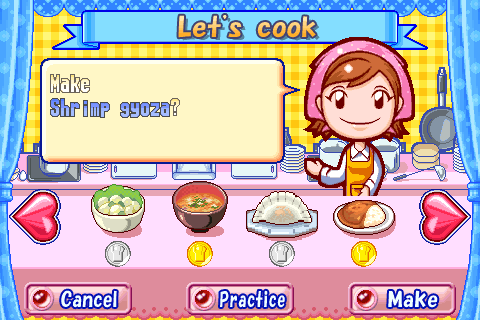 By practicing you can pick and choose which activities you would want to try, and each one is explained to you in case of confusion. It is not entirely essential, but it is helpful for the Make mode. In make mode you will be graded upon how fast and well you performed the tasks assigned to you in either a gold medal, silver, or bronze. Bronze is a failure while gold is completing the task 100% before time runs out or falls below the half way point.

After the recipe is made completely you will then be given a full grade out of 100 points and given a medal as such for the entire recipe. Unfortunately though the grading does seem a bit skewed as the only way to receive a gold is 100%, while even the smallest mis-step will result in a silver.

The activities themselves have been well adapted to the iPhone/iTouch’s movement sensing capabilities. While some of the touch controls are a bit finicky and inaccurate. There are various methods of cooking which will require you to do full motions using your iPhone/iTouch, such as tilting to cover a pan with butter, or sliding it side to side to pack meat. These are enjoyable and although may look a bit odd in public are a highlight of the cooking. 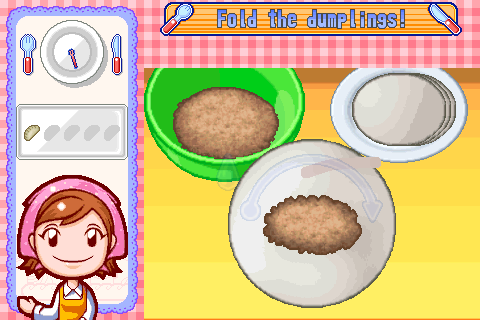 However there are problems with the finger recognition in some of the finer points of cooking. Folding dough and adjusting heat both have tough issues in registering finger swipes and can result in a loss of time and a mess up that was not your own fault, but the lack of recognition in the system. These can be frustrating but as most of the recipes can be finished in about a minute doesn’t usually hurt the overall experience.

Overall:
Despite some recognition issues Cooking Mama has made the transfer to the iPhone/iTouch just as good as Mama would. There are a decent amount of recipes and costing only $6.99 it is quite a deal as the first game we saw Mama in is currently still running at $20. Meaning that if you want the full Cooking Mama experience, but want a deal then Cooking Mama for the iPhone/iTouch is definitely the way to go.

I give Cooking Mama for the iPhone/iTouch: