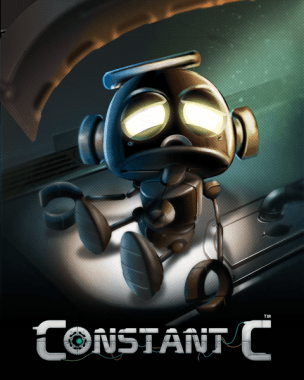 Constant C has been around for the best part of a year, but only launched on Steam in March after a successful Greenlight campaign, it’s also seen a release on XBLA. Taiwanese developers International Games System have been around for a long time, making PC and arcade games since the early 1990s. This title is yet another indie puzzle platformer, and even its core game mechanics play into another trend of the indie scene: the manipulation of time, gravity and space as the core means of puzzle solving. 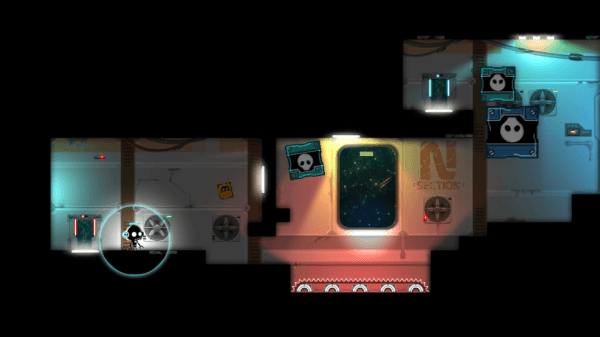 Somewhere in the depths of space the laws of physics have ceased to function. Time has stopped aboard an experimental station, and all its scientists have disappeared. The only things left functioning in the temporal freeze are the station AI and a little rescue robot, the player character. After restoring power to the AI the rescue bot is given the ability to get things moving again – any object that comes within the circular time field around him will once more be free to move through time and space.

His task is to collect data tubes and restore the AI to full power so that the station (and of course, the entire universe) can be saved from the mysterious mishap. The story is barebones in terms of plot elements but little details keep it ticking along: the AI expresses itself with emoticons, grabbing enough of the data tubes unlocks cut-scenes,  and of course the repair bot finds that he is not the only thing loose in the station… 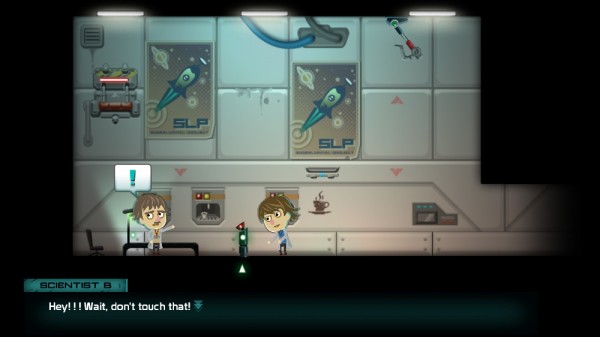 Constant C takes a quick session of play to open up, but when it does it proves to be a very smart, taxing little puzzler with tight physics. You begin the game with no powers at all, but swiftly get powered up with your own personal bubble of temporal normality- meaning that any objects within that circle around you act once more as if time is passing normally. Boxes suspended in the air will fall to the ground, deadly rotating gears will rotate once more, and moving platforms will be restored to life.

Whilst this is a fun mechanic in itself, things are improved immensely when the ability to tinker with gravity, as well as time, unlocks soon after. Initially changing the direction of the gravitational field can only be done with pre-placed switches, which is obviously a little limited. A few stages later however and you can do it independently, opening up the range and complexity of puzzles that the game can and will throw at you. It’s one of those titles that took me a little while to get my brain into, but after half an hour of feeling like a blundering idiot, I got to grips with the mechanics and found myself thinking in the correct way.

That said there are still a lot of deaths to be had in Constant C, as falling just a little too far will mean instant death. It’s a very clever limitation that means you can’t dodge the puzzles by just flinging yourself and the obstacles around. You can play by trial and error if you like, but later, multi-step stages punish this approach- there are no checkpoints in the fairly short (in gameplay terms at least, there’s lots of thinking time to add) levels. You do have the ability to zoom out and pan the camera, enabling a bit of forward planning if you don’t feel like dying ten times in order to figure out the level. 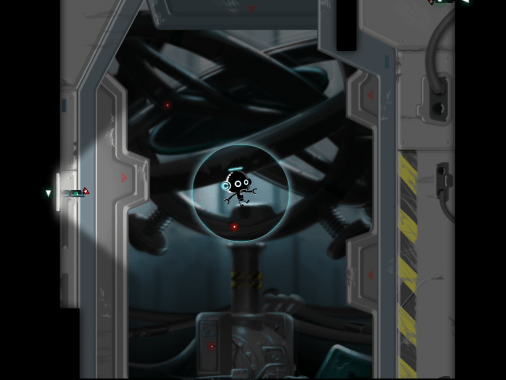 Of course the puzzles become ever more complex as you collect enough data tubes to unlock new rooms. Falling boxes and moving platforms are joined by destructible crates, balls, lasers and more, and the fact that gravity acts upon these things only when you’re close to them adds an element to the puzzles that I found really fresh and exciting. Momentum also plays a big part in the game, especially if you plan on taking on speed run mode, which challenges you to complete levels in seemingly impossible lengths of time. Rotate the rooms successfully and you can throw your robot around corners and across obstacles, completing a level in seconds if you time everything just right.

Even playing through the game normally requires precision, especially in later levels where the tiniest movement can mean the difference between success and failure. Constant C supports both keyboard and 360 gamepad input, and even though I usually find a gamepad more comfortable in this type of game, I found that the keyboard controls here were just as good at the job. In addition to the time attack mode there are also more data tubes than you need scattered throughout the levels, so there’s plenty of opportunity to go back to an earlier stage and pick up tubes by solving puzzles that just weren’t going anywhere before.

There are a lot of sci-fi infused puzzle platformers out there, and whilst Constant C’s general aesthetic isn’t anything new, it boasts some nice details that set it apart. Most obvious is the character model of the repair bot, an oddly sweet concoction of black and white. It’s silhouette-like appearance is echoed in the darkness that surrounds each level, and the lighting throughout is surprisingly well done. What’s really enjoyable are the subtle touches- the way that the background elements come to life as you pass them, and the soot marks left by the explosion of robot that marks a failed run.

There isn’t any voice acting and the sound effects are fairly standard and unobtrusive. The soundtrack is great though, and is appropriately sci-fi without being too sombre. 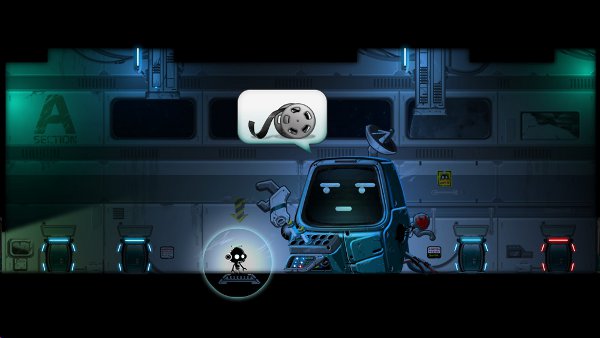 Constant C is a tough but fair puzzler that will intrigue anyone who likes to challenge their brain. Well made and well executed, its gravity and time manipulating mechanics work together extremely well and solving some of the later puzzles is incredibly satisfying. Players who really enjoy the game have the chance to dig in and perfect their technique with the time attack mode, and the presentation is sweet and subtle, with just enough story to pull you along.