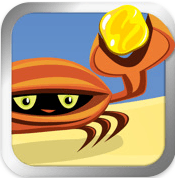 Spring has just arrived here in the northern hemisphere which means the snow is melting and the temperature is rising. Then right before you know it Summer will be here which means everyone will want to head to the beach and have a good time. There are many dangers though you should be aware of and I’m not talking just about sunburns, shark attacks, and accidentely going to the nudie beach and seeing someone’s grandmother rocking out in her birthday suit. Oh the horror! However the most dangerous thing to look out for is coconuts, thats right coconuts while they may have delicious milk inside they will fall and crack you in the noggin.

Coconut Dodge for the iPhone puts you in a situation where your fighting for your life against some very evil coconuts who are out to kill you. While this game might seem quite simple and for some there is fun to be had however I believe its a training exercise in self defense. Is this game any good or is it just a wash? Find out in this review. 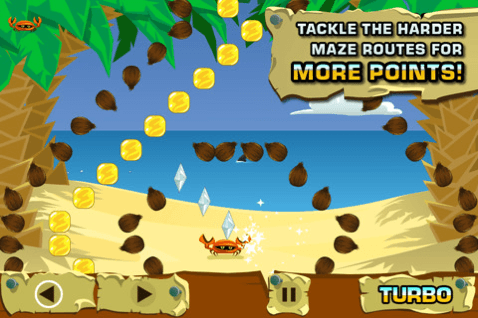 The game takes place on a nice and sunny beach and your just a crab who seems to be minding his own business and coconuts just fall from the sky and you got to dodge them to save your life. So there really isn’t a story to speak of, which means if you want to know why all these coconuts want to crush our friendly crustacean then it would be up to you to make up your own story. I believe the crab’s name is Robert and after a horrific accident they had to replace his legs with bionic ones and he has to travel back in time to fight the evil coconut army and raise enough money to pay for his mother’s surgery for her life threatening illness by picking up random gold pieces and diamonds people drop. I hope if EA makes a sequel that they take this idea and make Coconut Dodge 2: Revenge of Robert. EA your welcome. 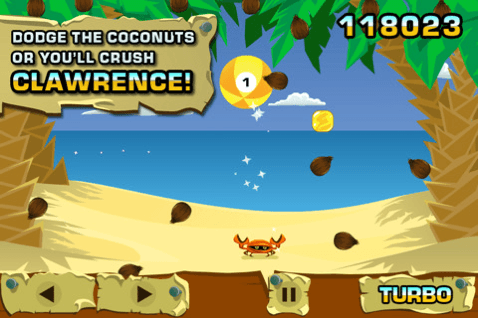 If you love the beach and anything to do with it you will love the look of Coconut Dodge. The animation for the crab is really nice also the coconuts and collectible objects in the game look really cartoony and bright. One of the nicest things about looking at Coconut Dodge is the beach background that you play on is very dynamic and not some cheap static background slapped on. You can see a shark fin out in the ocean, clouds breezing by, and the ocean sparkling to name a few. For what it is Coconut Dodge looks great my only gripe is that there isn’t more backdrops to play on. Robert… I mean the crab can’t go on the boardwalk, or fight for his life in the kitchen, or even a different looking beach would have been nice. Games like Angry Birds had different backdrops as well as different characters to play as that added variety and keeps your interest. Coconut Dodge looks nice but you may get tired of looking at the same old background and same old objects over and over again. 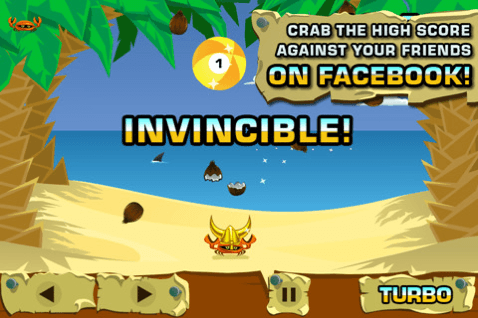 Coconut Dodge in the audio department is kind of a mixed bag. As far as audio goes the sound effects in this game fit really well with the cartoon aesthetic but arn’t anything that amazing. Some of the better sound effects come from when you bust a beach ball and you hear the pop and then it makes a sparkle sound when you get points for it or when your crab gets hit in the head by the coconut you hear it crack and what sounds like a studio audience sigh in disappointment as if to say its your fault for hurting this poor animal. Most of these are in place just to make sure you know your grabbing the goodies and let you know when you make a bad move. What is really depressing is that there is only one song and it loops over and over again. The main menu though has a different song but thats the only time you get to hear it. I know this is a game that is only a dollar but even a couple of extra ones would have been nice. The song you hear isn’t bad it just gets tiresome, but there is always the volume button to turn it down if you get tired of it. 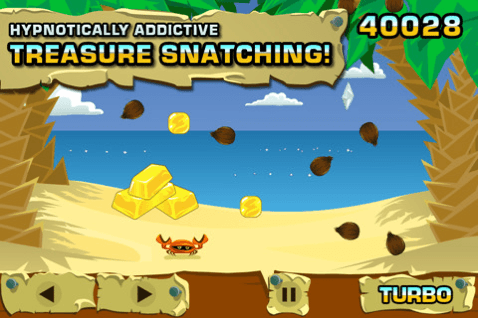 All is not lost for this game as the gameplay is its saving grace. You basically dodge coconuts that try to kill you while collecting anything valuable such as gold blocks, diamonds, and golden anchors to get points. Gaining more points is easy as you can bounce some beach balls and even get a viking helmet and get back at your evil coconut oppressors all the while gaining points. In Coconut Dodge you advance into various stages the further you go the more challenging it becomes. This can be the most addicting part to the game. These coconuts don’t just always randomly fall no they sometimes form maze like walls where you have to quickly weave in and out of harms way. Also the game has no problem with throwing the more tempting higher point value items in more dangerous spots in an attempt to lead you way from any safe patterns you devise. 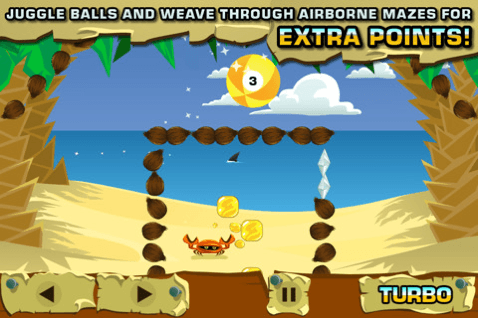 All that shimmers on the beach isn’t gold though as if you lose all three of your lives you have to start all over and if you have nothing but spare time at home then its not a big deal however if your killing time on lunch or taking a ride to work you don’t want to have to go all the way though that again. It could have been split up in a separate mode for those who are hardcore about it but for the rest who rather not deal with doing that through out the many stages which kills any motivation to try to complete the game. Also there is some extra modes for you to play however I was unable to unlock any of the others and I’m not for sure how to do it. The game makes no mention on how to unlock them so I don’t know if I need a certain score or even a certain stage. There is one extra mode ready at the get go and that is Maze Master, in this mode you are trying to get as many points as possible before you make it to the end of the maze. Its basically a quick fix if you don’t want to hop into the main game. Now I know I have sounded really hard on the game but there is good in it however be warned it can be addicting to some or really repetitive for others.

Coconut Dodge is a fun and simple little game that is good to play on the go. The enjoyment you can get out of the game may vary.  It just needs a little bit more to keep the attention of some because it lacks variety in most of the important areas. If Coconut Dodge just added a little more to the settings and made it easier for those short burst of gameplay then it would be a hit. I still recommend that everyone at least play this game and 99 cents isn’t that much and its worth it whether you play this for 30 min or you play it for the next few weeks.