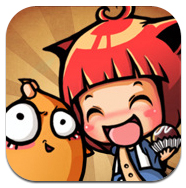 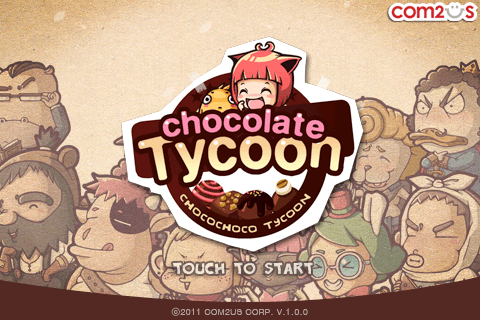 After hearing the title ‘Chocolate Tycoon’ one might expect to find another storefront based simulation, where the basic structure of the game consists of purchasing furniture, waiting for meals to cook and accumulating money. If one were to expect this from Chocolate Tycoon, they may be surprised by how much more the game has to offer. Com2uS’ newly released game, Chocolate Tycoon, is a time-management game driven by a solid narrative. The game combines the goals associated with simulation games and blends in elements of role-playing by creating a fantasy theme and story line, the selling of chocolate to the villagers of the Kingdom Choco, and becoming the best ‘chocolatier’ in the Kingdom.

At its most basic level, Chocolate Tycoon is a simulation of a chocolate store. Much like other tycoon titled games (Ice Tycoon, Fruit Juice Tycoon), this portion of the game involves the buying of ingredients and other elements in order to make chocolates, which is exactly what you would expect from a game of this title. However, the ‘store’ isn’t an actual shop, but rather another game in itself based on reflexes and timing. Chocolate ingredients appear to the left side of the screen for you to collect. Below this are small chicken type animals called ‘chokis’. The Choki’s are fed ingredients and produce chocolate in white, milk or dark flavours. The customers are then fed different types and numbers of chocolates according to their preferred tastes. While this whole process can be a bit repetitive, as the days pass you gain more customers who are pickier with what chocolate they are served and the difficulty gradually increases with each new customer. When the timer runs out the shop is closed and the day has ended, you can either choose to take part in wholesome night time activities such as investing and breeding Choki or reopen the store and start a new day. As the challenge increases, making and selling chocolates becomes a pretty entertaining little mini-game within Chocolate Tycoon. 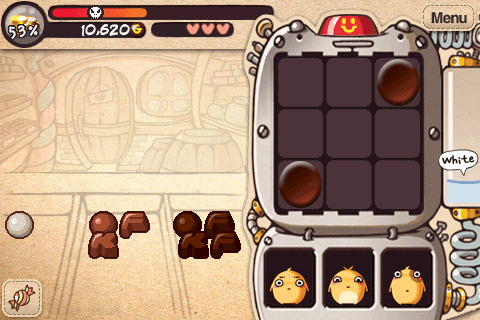 Alongside all of this there is a bit of a role-playing element to the game, where your ‘mentor’ or other characters in the game will assign quests for you to complete with rewards that help improve the quality of your chocolate and business. This portion of the game really helps push forward the over all narrative of Chocolate Tycoon – the quest to become the best chocolatier in all of the Kingdom Choco. The quests are not too difficult, usually the characters just ask you to visit another shop or location and do small favours for people. Nonetheless, these missions really add a fun element to the whole game, especially when delivered by terrifically designed characters with sharp personalities. 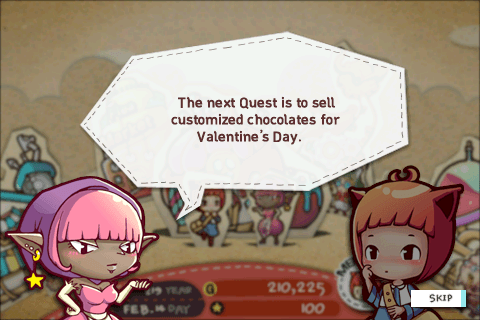 As the game processes you are able to learn new chocolate designs that earn more money than the basics you start off with. While you can collect designs through presents that are given with successful chocolate selling during the game or by buying them from the store, learning them is a different story. There are two options for learning a new design, either by paying using a currency of stars to the design workshop (the fast way), or by taking part in a mini-game where you need to trace the outline of the design (the fun way). So far I have always opted to take the fun way, and it has proven to be pretty entertaining each time. However, when doubling up on designs the process of tracing the same design can be a little tedious. Thankfully, you can alter the chocolate designs after learning, adding in different ingredients such as nuts and syrups. The user-design aspect of the game is set up similar to the old Microsoft paint program, starting with chosen design as a template, with additions automatically inserted with a press of the icon. Because of the pixel-design interface it is also really easy to draw your own designs on top of the chocolates you are going to sell – which is a neat little addition to the game!

One of the first things I noticed when playing chocolate tycoon were the amazing graphics. From the title screen to the intricate diorama-esque construction of the game world, Chocolate Tycoon is graphically sound in every way. I really love the overall design of the world. The buildings are constructed in a pseudo-medieval fashion, which really adds to the role-playing aspect of the game. Not to mention the bizarre characters you interactive with and sell chocolates too. Each character is uniquely designed, matching their occupation and personality in a comical fashion. 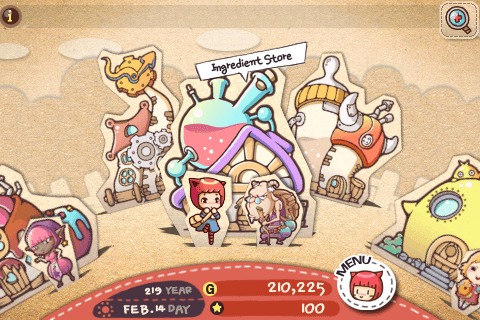 The main conversations between characters sound like a fast-passed telephone conversation, which I find to be a funny little addition, especially for some of the characters that are a little rude throughout the whole game. There are few interesting little sound effects throughout the game that give it a nice cartoon-like quality, a good example of which are the reactions to selling chocolate like ‘cooool’ and ‘I’ll be back!’ Overall the graphics and audio pair together well to make it seem like a little interactive cartoon.

Chocolate Tycoon completely beat my expectations of a chocolate selling game. The means of producing chocolate and maintaining the store are unique and engaging. Where other reflex games for the iDevice lack in a strong narrative, Chocolate Tycoon picks up the slack in this department and really brings the storyline home with their graphic and audio design. While the conversations and world exploration come across as a bit of an interactive cartoon, the inclusion of quests adds some much needed goals and structure to the game, pushing past the typical simulation goal of making a profitable business.