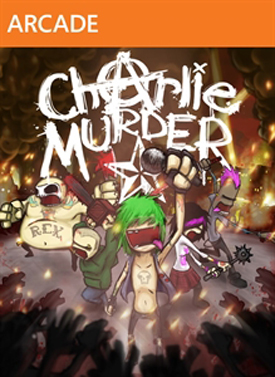 Ska Studio’s latest outing; Charlie Murder, is a punk-rock inspired, side-scrolling beat ’em up. Drawing inspiration from the arcade classics of old, and mixing them with some modern day RPG elements, a kick-ass soundtrack, and visceral, graffiti style art work, Ska Studios has allowed them to create a memorable experience that is not only worthy of the Summer of Arcade, but almost a must-have for any Xbox owner. 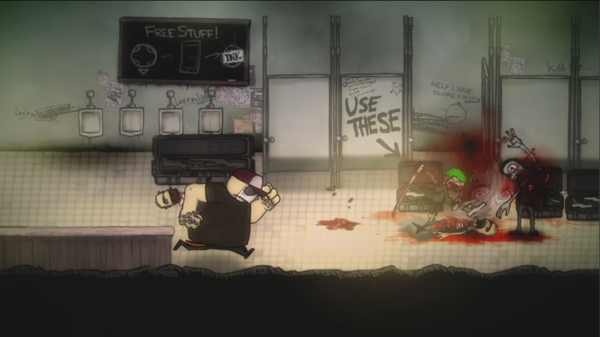 Charlie Murder’s story takes a while to show itself, and this can be a mixed blessing. It took a few levels before I had any idea why we were fighting hordes of the undead. The beginning stages of the game almost imply that it is a “just because” situation. This can turn many gamers off, but if you persevere the story starts to unfold and it is actually an enjoyable tale.

I think most people can relate to the feeling of a band breaking up. Either a band we love parts ways, or a band a friend of ours was absolutely obsessed with calls it quits. Charlie Murder is a story about a band who does just that, and about an old member who becomes so full of rage and angst that he becomes the embodiment of evil.

As you play through the game, you will be treated to flashbacks of the band member’s lives. These serve to paint a portrait of the life and timed of these punk rockers prior to them being hunted by demons. Many of these will portray the band in quite a bad light and make it difficult to sympathise with their plight. 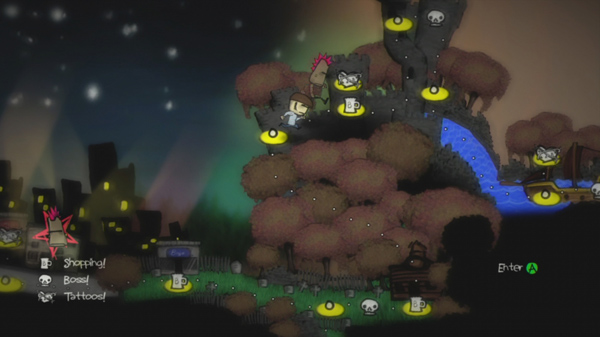 Charlie Murder has its roots squarely in the realm of old-school beat ’em up. Much like Breath of Fire, Double Dragon or even Scott Pilgrim before it, you control your character through various 2-dimensional stages, beating down enemies as you go. What really separates Charlie from his other well-known brothers is the slick RPG elements added in.

At the beginning of the game, you are given the option to pick your character. In most beat ’em ups this would be limited to a pallet swap, or maybe a few different attacks. In Charlie Murder however, it changes the game completely. Each character has their own class. Many of these classes will be immediately recognisable to anyone who has played an RPG before. The Shaman acts as a summoner, the Tank can take a lot of hits, and the Mage does magic related stuff. It is all pretty standard stuff for the genre, but its presentation puts it into a class of its own. 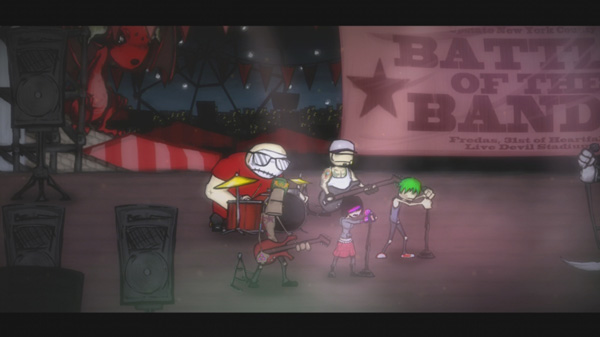 As each character in Charlie Murder is a band member, all of their skills and abilities revolve around their chosen instrument. The Shaman is the bassist of the group, and he strums a wicked solo to summon his rolling saw blade of death, while the Minstrel screams into her microphone to damage her enemies. It all fits seamlessly together to create this unified world where everything makes sense.

Aside from general character class business, the game incorporates a slew of other RPG elements. Everything you would expect to be able to do in a modern RPG is here, from customising your character appearance and skills through various items, armor and gear, to upgrading certain stats like speed or strength. 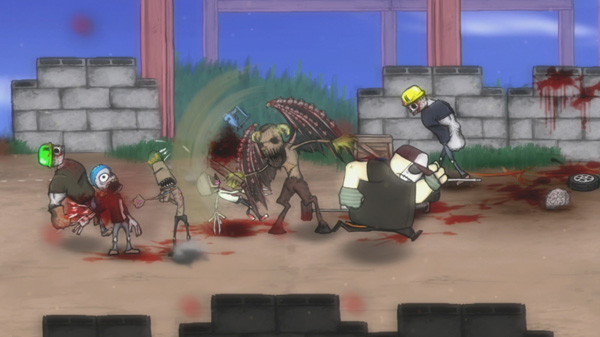 The sheer volume of enemy types is nothing to laugh about either. It seems that almost every enemy you face is unique and different. This extends beyond their appearance and even goes into how they move and how they attack. Everything from demons, and zombies through to ninjas are thrown into the mix, and yet somehow it all just seems to work.

Enemies aren’t the only thing that there are a plentiful amount of. Weapons and pick-ups scattered across the ground really mix up the game. Car tires, decapitated arms, giant AK-47s, grenades and tonnes more! Charlie Murder keeps the game fresh by constantly mixing up the enemies, the weapons and the item drops so that you are never bored. 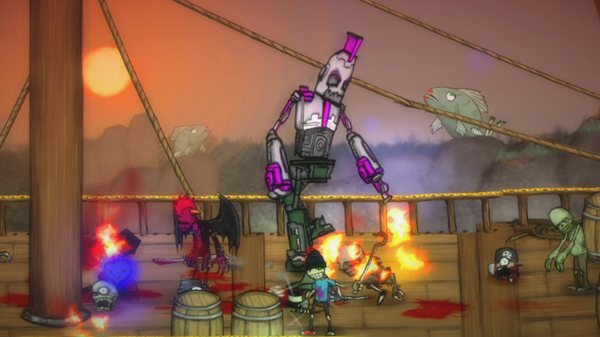 Have you ever been walking past a wall or building that was covered in graffiti so good that you just had to stop and stare? That is Charlie Murder. The world and characters of this game all look like they were spray painted onto a wall by some incredibly talented youths. The art style has become a mainstay of Ska Studios games, but here it really gets a chance to shine.

The pseud0-graffiti art style is so awesomely done that you would be forgiven for thinking at a passing glance that there was little to no detail in the characters and levels. However, spend a few seconds looking at Charlie Murder and you will see an enormous wealth of fine detailing and life hidden in plain sight. Characters are surprisingly expressive considering they have no eyes, and the level design and backgrounds are filled with so much life, that you can imagine this world being real. Even unnecessary posters in the background are highly detailed and are just a pleasure to look at. 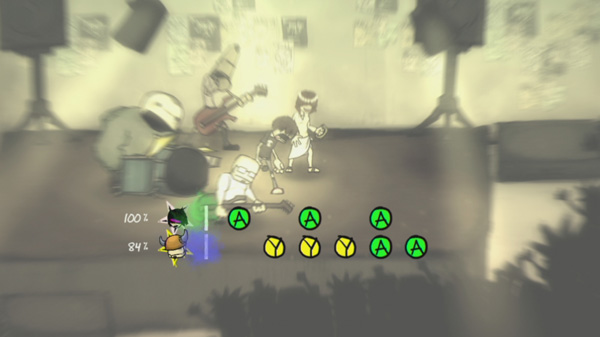 One thing really does stand out in Charlie Murder, and that is the gore factor. The game is very visceral, and violent. As you carve your way through enemy after enemy, you will see very intricate blood stains litter the levels. A lot of the finishing animations and super moves are 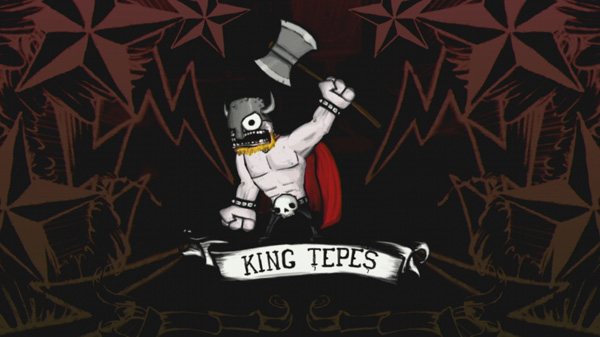 Charlie Murder features an absolute KILLER soundtrack, that is easily one of the best I have listened to in a long time. A bunch of punk rock tunes with some really Gothic influences make for a fantastic video game soundtrack. I always find the measure of how good a game’s soundtrack is if it would stand up on its own, without the game behind it. Charlie Murder does this to perfection. You could easily listen to the entire soundtrack without ever knowing there was a game attached.

Charlie Murder is another video game that lacks any discernable dialogue, and this means that you are left interpreting the tone and emotions of the game and its characters from the little visual and audio nuances. This is another area where Charlie Murder absolutely shines. I was never lost for what was going on, or how I should be reacting during my playthrough, which says a lot about the work that has gone into the game’s audio. 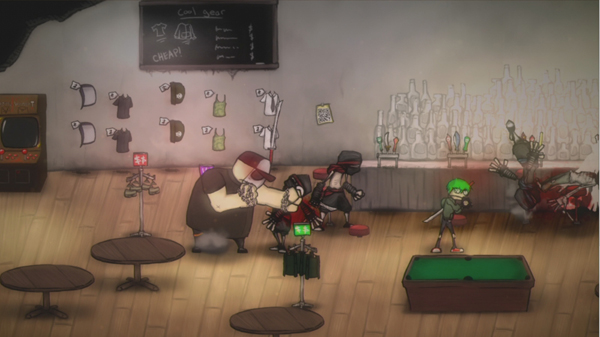 Charlie Murder is a punk-rock, anarchist dream, filled with awesome graffiti-style art, and a killer soundtrack. The presentation is certainly only the icing on the cake though, as the game elements are rock solid. Taking the time-tested ‘beat ‘ em up’ formula, and modernising it with some interesting RPG elements makes for a game that is as fun to play as it is to watch.