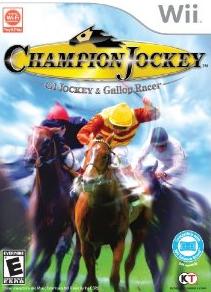 Overview
There are a ton of popular racing genres out there, but over in the west, horse racing is honestly at the bottom of the food chain. It’s not that the sport is bad by any means, as there is definitely a hardcore following out there. It’s just that we have never seen one of the video game adaptations hit the mainstream and the entire genre lies in it’s own little niche zone. Tecmo Koei have a lot of faith in their loyal fans though and have released Champion Jockey: G1 Jockey & Gallop Racer across all platforms to better feed their hunger. This title is a spiritual successor to the G1 Jockey series we seen from the past, but adds new motion controls to make the experience a more immersive and realistic one. How does this trip to the track hold up? Here is my review for Champion Jockey: G1 Jockey & Gallop Racer.

Story
Believe it or not, there is a bit of a story within Champion Jockey. Players start out as a rookie to the jockey world and soon set out to pass through the ranks in a lengthy career mode. As you progress, you are taken through several dialogue sequences with other racers, with a coach of sorts guiding you to victory with tips and suggestions. It’s quite a simple plot to follow and is definitely not heavy by any means, but there was something rather charming about the way this story is told. 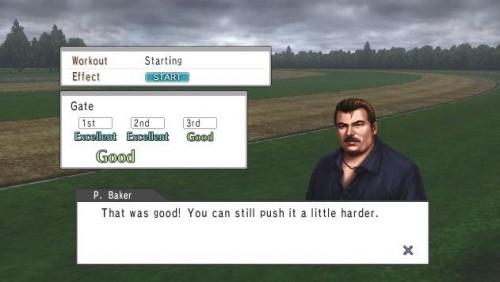 Instead of viewing spoken dialogue or actually controlling your jockey off track, players will be treated to a complete text based experience. The jockeys themselves are simply made out of still 2D images, with facial features changing depending on the dialogue spoken. This makes the entire cast rather forgettable, but I personally looked past that fault quickly as even though the conversations can get a bit bland, you will constantly get a detailed critique after every race along with some nice motivation from other riders or coaches. Again, this isn’t too deep, but I actually felt like I was learning from my mistakes after each race which made this campy interaction end with something productive.

Gameplay
Here is where the game gets tricky. You would think horse racing on the Wii would involve just using the controller and nunchuck to move side to side and speed past opponents, but these controls have a steep learning curve and unless you take the long tutorial at the start of the game, you might find yourself completely lost in under a minute. With the Wii version alone, there are four different control types. Players can use the balance board, Classic Controller Pro, WiiMote and Nunchuck, or simply the Wiimote by itself to play the game. Out of the four, I felt most comfortable with the two latter methods as they were much easier to master in a short time. Those craving a more realistic feel will also want to attach that nunchuck as the experience is much richer when you have both “reins” in your hands. 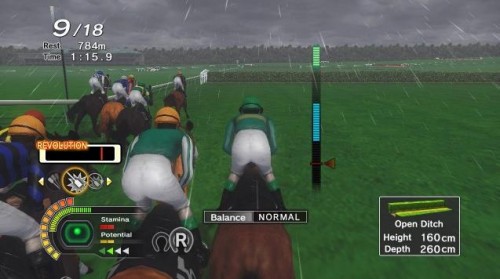 Starting up a race, the amount of meters on the Heads-up display can be flat out intimidating. I say this because there is so much happening on-screen, it can honestly make controlling a horse seem like you are about to start driving a diesel. It takes time to master, but again, the tutorial explains a lot and after my 8th race or so, I felt comfortable monitoring everything at once. The game also becomes a bit more accessible when you remember that you’re controlling a jockey, and not the horse itself so everything you do goes into how fast your horse will cross the finish line. Some tracks also have obstacles and hurdles the player must clear which brings up yet another meter and you must then make a timed stroke to get the most out of a jump and landing. The whole experience is very detailed, but thankfully the scheme given is a working one and performs with any hiccups.

Each horse in the game have their own personality of sorts. Yes, that sounds a bit odd, but the attributes each steed portrays can be critical in the more difficult courses. Some horses hate making left turns but perform well on rough tracks while others are better in close situations and do well with hurdles. These qualities might not sound like much, but you can actually feel a distinct difference with every horse in the game. To thicken the variety even more, there is even an in-depth breeding mode, which can let the player spawn a creation that fits better with their own personal play style. 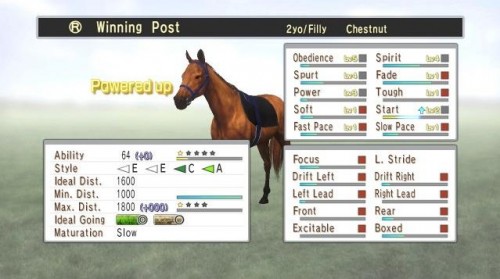 Those wanting a more casual racing experience our of Champion Jockey are also in luck. A “Fun Race Mode” can be accessed from the start and allows players to take part in much more simple exhibition races. Pick a course, pick a horse and go. The standard Race Mode offers a bit more meat, allowing you to choose from several different modes that can be found in the Story. This include the likes of simply practicing, a Quest Challenge, Scenario Challenge, and multiplayer competitions. Quest Challenge is the most substantial of these offerings, presenting a series of races that the player must advance in to win in a tournament-based setup. Scenario is a bit lighter, but lets players take their bred horses into races and compete in a line of preset matches.

As you could probably tell, there is a lot more to Champion Jockey than it may seem. The story mode alone can go on for a hefty amount of time as there is always a new feat to conquer. Breeding is so in-depth that it can also lead to a full experience in itself, which can even double your of time spent with the game. There is also an online mode that allows you to participate in races with players from all over the world, but sadly I have yet to actually find another player on the servers after a good number of attempts. That extra is just icing on the cake though, as the single-player offerings offer enough replay value to keep fans busy for quite some time.

Visuals/Audio
While there is a ton of options and general customization when it comes to gameplay within Champion Jockey, the graphics are plain and generic. The horses and even the jockeys all look the part, but the entire presentation feels dated by about 10 years. Menus have very little color, courses exhibit some bland textures, and the characters in career mode carry an atheistic that appears to have been ripped out of a children’s storybook. Now, this doesn’t mean that the game is ugly by any means, but there isn’t a whole lot of “life” to be found and if you are after something that pushes boundaries for the Wii, you would be looking in the wrong place with these boring tracks. 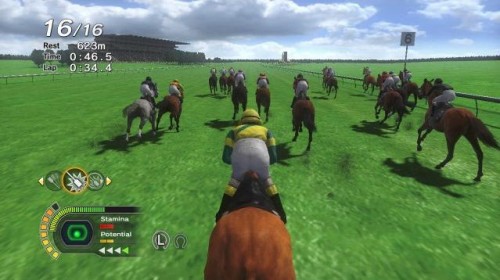 As far as music goes, the soundtrack in Champion Jockey is also a bit stale. The tunes do give off an upbeat atmosphere at times, but many are repeated and don’t offer much excitement during races. Horses however sound realistic and the thumping of hooves can be heard as your steed gallops to victory, which in turn makes everything feel more authentic. While it’s not a huge loss, some sort of voice acting would have worked wonders with the jockeys as you can easily tell with the writing that Koei attempted to craft out several varied personalities.

Overall
I personally don’t have much experience when it comes to horse racing titles as Champion Jockey: G1 Jockey & Gallop Racer was my first. With that said though, I felt like this title definitely delivered in terms of gameplay and those looking for an authentic and true adaptation of the niche genre will find love with all of the in-depth approaches taken here. There was definitely some sacrifice made in the presentation of the game, but considering the heavy amount of detail, it’s quite easy to see why. Champion Jockey isn’t for everyone, but if your up for a challenge or just want to try a unique racing romp, this title has all the tools to craft you into a master.