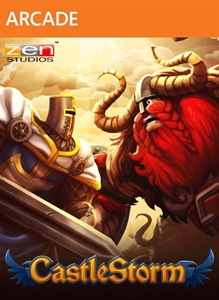 Overview
CastleStorm is best described as a Tower Defense meets an Angry Birds style physics puzzler. Tower defense games where you spend resources to deploy troops to defend your base are great, they require quick thinking and immediate responses. Physics puzzlers where you launch projectiles at various angles to destroy towers and castles are also great; but they require patience and concentration. CastleStorm melds these two genres together and the end result is not pretty. While deploying units and destroying castles is fun in theory, in practice it just feels like you are rubbing your stomach and patting your head at the same time, with a series of micromanaged tasks that result in a game that doesn’t quite equal the sum of its parts. 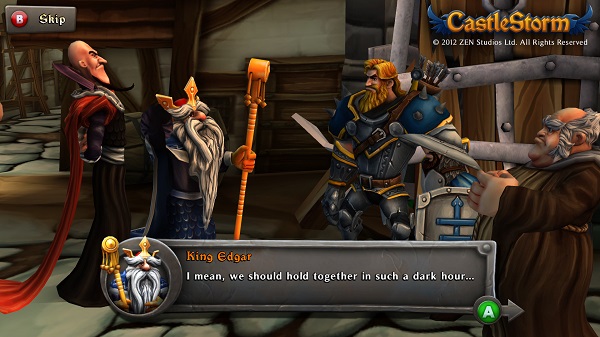 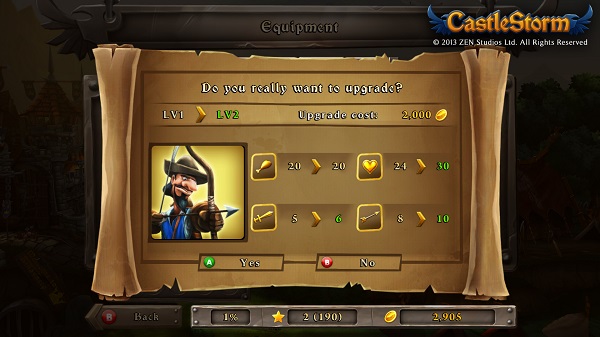 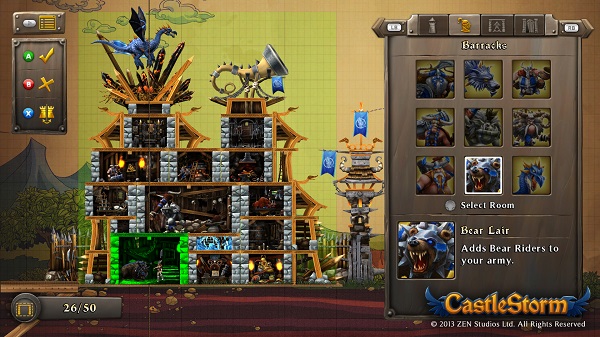 Another complaint is that sometimes the controls can seem quite touchy and sensitive, where a single nudge of the control stick in the wrong direction can have your perfectly aimed shot firing completely off target. There is an option to control your reticule in small increments with the D-Pad, but it just adds another detail to worry about.

Visuals
Zen Studios originally set out to make the game a throwback to when we were children building things out of blocks and then destroying them, and the art goes a long way to show that. Lines are drawn very thick and distinct and there is a lot of colour in this game. It gives off a vibe that is a mixture cartoons and toys you used to play with when you were younger.

However while the art-style is very nice for a game such as this, a lot of the animations (or lack thereof) fall quite flat. Characters all constantly have the same expression on their faces no matter what emotion they are trying to convey, and in the few small instances where there is dialogue in the game, there isn’t any visual indication that a character is talking, just a text box that appears at the bottom of the screen. 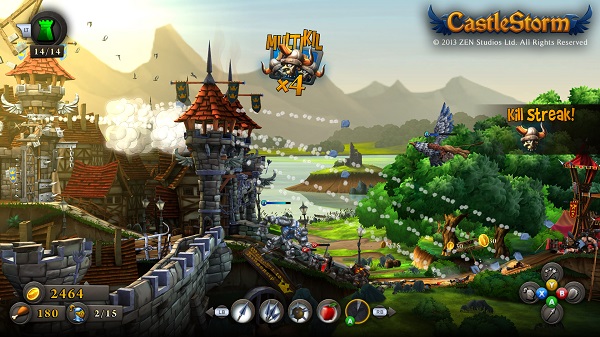 For those that have access to a capable TV the stereoscopic 3D actually works quite nicely on this game, with no ghosting and it provides a nice, clean, almost diorama effect on the whole game which isn’t unpleasant to look at.

Audio
The audio, although clean, crisp and delightfully cheerful very quickly becomes repetitive and flat out annoying. Most of the game’s cut-scenes are not fully voice acted, instead with characters talking in a series of grunts and groans while their dialogue is written in the bottom of the screen. During gameplay the same sounds will be heard time and time again, every time you summon one of your soldiers, they will say one of three or four short phrases. The audio really doesn’t add to the overall experience, and after a few minutes playing it in fact starts to detract from it.

Overall
CastleStorm has a lot of great elements and it wears its inspiration on its sleeve. Unfortunately the game just feels like a series of micromanaging tasks. It suffers from being an amalgamation of two almost polar-opposite genres. Requiring the player to be both calculated and accurate while also being impulsive and reactionary makes for a game that is not only frustrating, but inconsistent and frankly just not that good.