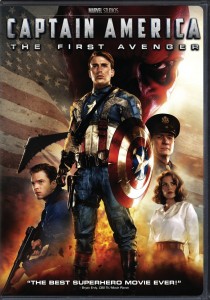 Joining the ranks of the Avengers film releases, comes Captain America. My views on Captain America are divided, on one hand he’s a brave hero with perfect pectorals, on the other he takes patriotism to a ridiculous level that really highlights America’s self-obsession. The Captain America comics had their hey-day during World War 2, when America was rallying itself for the fight against the Nazis, and the popularity since has waned. Can the Cap make himself relevant in the modern times?

Still, Chris Evans is a great actor to watch, he has proved in the past that he treads the line of humour and action hero easily, the line that Robert Downey Jr makes his bitch without any real effort. So can Captain America: The First Avenger join the ranks of the rest of the legendary Avengers movies?

The movie starts by discovering something out in the snowy tundra – something circled back to later. While this may make some people feel all happy about the idea of a circular plot line, personally it gave the movie away for me a bit too much. 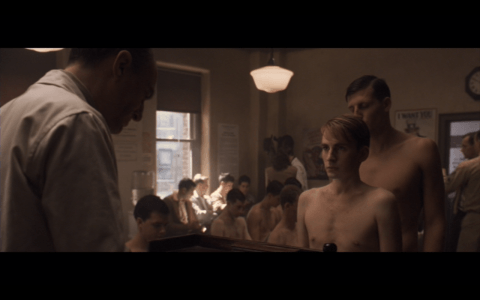 We’re introduced to Steve Rogers and his many attempts to make it into the army, he’s been denied them consistently due to his lackluster build and medical issues. Since everyone knows that Steve Rogers is Captain America, either through general knowledge, or the trailers, the biggest reveal is the fact that he is the size of a pre-teen. That doesn’t stop him for standing up what he believes in though, and he takes a lot more beatings than someone with that many medical issues should.

They spend a long time establishing his character, in a lot more ways than they probably should have. It’s pretty clear that he’s a decent guy who always does the right thing, but can’t do much due to his stature and health issues.

Enter, German doctor who sees the goodness in him and decides he’d be perfect for an experimental serum that will turn him into a super soldier. He doesn’t really get much in terms of super powers, he just becomes epically built, is super fast, and seems to be unable to die or age. 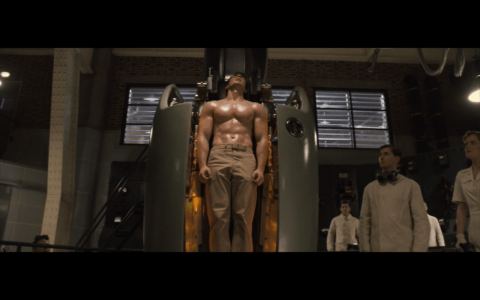 If you think that once he undergoes the transformation the pace of the movie will speed up, then you’re unfortunately mistaken. There’s even more stagnancy in the plot after the transformation, and it’s kind of exaggerated by the fact that you’re expecting a lot more to happen since he is now Captain America. However, it does explore the other side of the war, which I thought was pretty interesting. The propaganda and sale of bonds is something that isn’t usually gone into, and not something I was expecting from the movie. However, it does actually seem natural that they would try and make him raise money for the cause, rather than fight for it and risk his death. 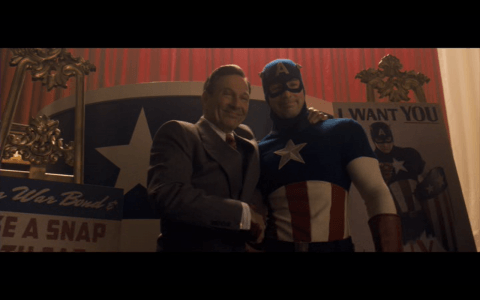 Once he starts fighting, all of the character and situational exploration flies out the window. It seems like the movie never reaches that real sweet spot of managing to have both fast paced action and mixing in the character development. Steve Rogers never really changes, or has a real epiphany; he just remains the same righteous guy he is in the beginning, only with more muscles. 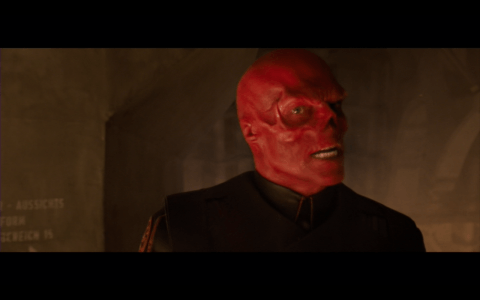 The villain of the movie, Red Skull, is not one of Hugo Weaving’s best roles. He pretty much just has to be constantly leering and yelling. He is one of the characters that you just don’t really understand where he’s coming from, although in a Captain America movie I am not surprised that good and evil is so firmly defined.

If you watch this movie expecting Chris Evans’ usual characters then you will be quite disappointed, because humour isn’t as present in Captain America as it is in the other Marvel Avengers films. While there are a few jokes here and there, most of the film is as straight edged as the Cap himself. 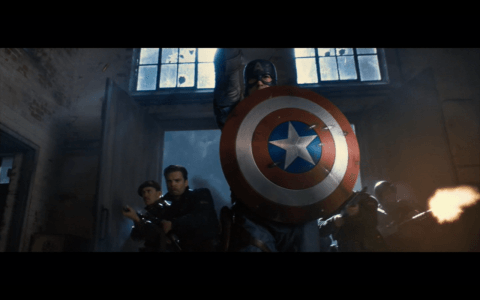 It’s pretty cool that the movie so strongly references the other avengers, with the power source coming from Odin’s treasure room, and of course Tony Stark’s father, Howard Stark. It’s always been something that I’ve enjoyed about Marvel movies, and is a great way to pump people up for the Avengers movie.

The late forties styling is awesome, the way that the sets, costumes, make-up, everything is done is reminiscent of the period and really makes the movie feel authentic.

Cap’s costume, which underwent a lot of drafting, adjustments, and reimagining, looks great in the end. The choice to show the evolution of his costume through the movie was very cleverly done, and the end product is truly amazing looking, while not stepping too far out of line. Given the cheesiness of the initial costume, the fact that the end result is so badass really speaks well on behalf of the costume design team. 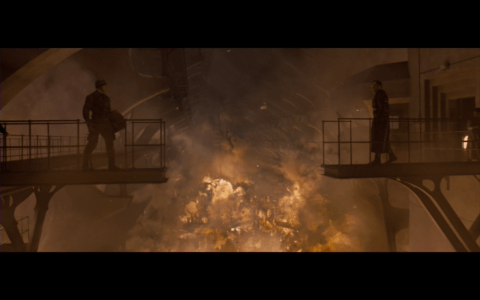 The fight scenes are, in no small terms, epic. No expense is spared in the visual effects, and in one particular section of the movie you will be blown away by how many explosions, fire, and fighting they can fit into five minutes.

The soundtrack is just what you’d expect from a movie that so heavily embodies Captain America, it’s rousing and patriotic, and reminiscent of what someone would expect from the propaganda of the time. 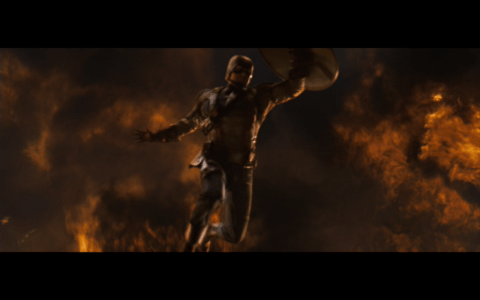 It might seem like I didn’t enjoy the movie so much, but I actually did. While it is self-righteous and a little too black and white for me, it was quite a fun movie to watch. The fact that it is quite black and white means that there isn’t too much inner conflict, and it’s easy watching. It is the polar opposite from the shades of grey of the Batman franchise, and if that is what draws you in to superhero movies then look elsewhere. Captain America is a man who always does the best possible thing, regardless of the situation, and fights plainly evil men without faces.