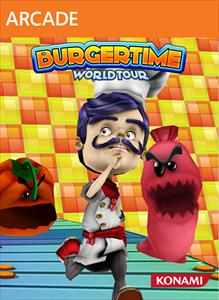 Overview:
BurgerTime made its debut in 1982 as an arcade game. Finding a wide popularity, BurgerTime was ported to early consoles such as Intellivision, ColecoVision, Nintendo Entertainment System, and even the Atari 2600.

In the new wave of reconstructed classics, BurgerTime World Tour emerges with much anticipation. But will this reconstruction hold up to its predecessor?

Story:
If you wake up in the morning and have to decide which one of your identical chef hats you want to wear, you might just be Peter Pepper. After getting ready Peter flags down a taxi for a ride to work. As the yellow cab comes near to the burger chef, the driver steps on the gas leaving Pepper in the dust. An evil sausage named Frank Furter was the cab driver and wants to prevent Peter from advancing as a burger chef. 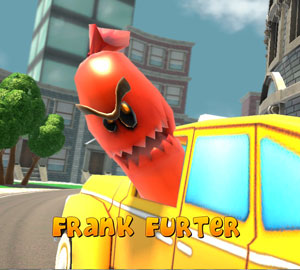 Four world chefs challenge the Peter Pepper’s abilities as a burger chef. By mastering the art of each world’s burger varieties, Peter will be able to defeat his annoyingly persistent rivals.

Gameplay:
With easy to use controls, this title can be fun for casual gamers. Utilizing the left analog for movement, the casual player does not need to worry about potentially confusing duel stick controls. Unlike the game’s predecessor, Peter Pepper can jump with (A). Using the jump along with directionals will help in avoiding enemies like Frank. While I am not against the jump implementation, BurgerTime diehards might be disappointed with this “controversial” move. However, I feel that it is necessary to fit well with the 3D rotating environment. 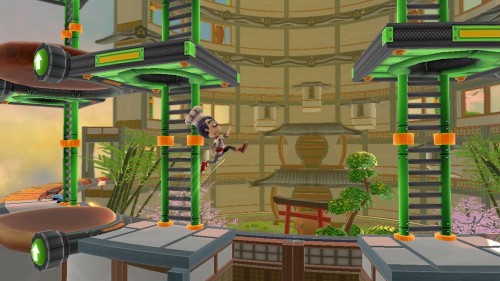 The clear objective of each level is to create burger(s) by dropping ingredients platform to platform. Once all of the ingredients have dropped onto the dining plate, the burger will be counted as complete. Now the only way cheese, lettuce, meat, or bread can drop from a platform is by having the player walk across the ENTIRE ingredient. Jumping dead center in a patch of lettuce will only make it droopy.

When mere avoidance isn’t enough, use the pepper shaker. Listed as (X), the pepper shaker will momentarily stun any enemy that is sprayed. When you cannot get passed the walking produce, pepper the hell out of them. 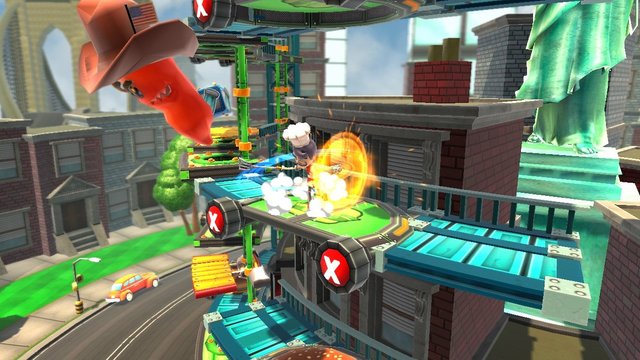 Additional to the pepper shaker, there are other items that are available for pick-up. Spatulas can be used with (B) as a whirlwind attack on any enemy. An important note about spatulas is that you do not need to stun enemies before using this ability. Wasting your shaker charges may prove deadly especially with aggressive opponents. Other power-ups include rockets, speed boost, and an ice shield. None of the power-ups last for a long time, and most prove to be more hectic to acquire.

Since the single player is timed, there are ways to complete levels faster. Enemy avoidance comes with a price – more time. Stunning the baddies with your pepper shaker and using (Y) to pick up and throw them can prove useful. If thrown on top of your ingredients, there will be extra weight distributed. Once dropped the ingredient – with baddies – will fall further. This can reduce the time of burger completion and add bonuses to your overall score. 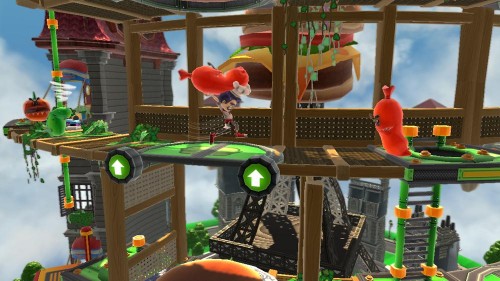 So far I have only introduced one of the several annoying produce that will try their best to kill you. Frank is joined by Sonny, Ruthless Dill, Lim Burger, Chaz, and Habba De Niro. Each enemy has their own special ability and focus. For instance, Ruthless Dill will guard an area and mimic a player’s jump. Do not try and jump over this guy – you will lose. Habba De Niro hunts the player down but will cause an explosion if stunned, killed, or knocked back. This means you should probably run away.

Beyond the wacky looking killer food groups, the player must avoid certain death traps along the journey. Wooden platforms will break after a second of impact. Normally there are spike strips below these wooden steps, so be very careful. Other levels contain areas that will light ablaze momentarily after contact. Do not plan on standing on this platform unless you want a burnt arse. 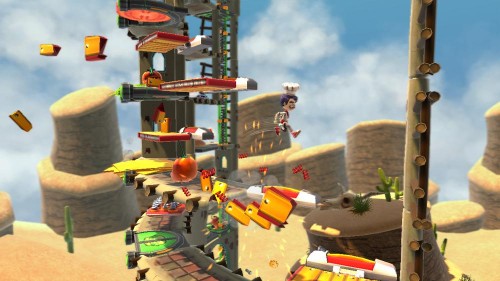 Boss battles can be difficult. The objective for boss levels are the same as normal levels but with a twist. The boss’s life meter will decrease as you create burgers. However, you may experience tremors, deadly ketchup/mustard gases, and Pepper seeking rockets.

Once I had completed the single player mode, I decided to give the online multiplayer a try. Sadly, I was unable to find a game over the course of a few days. The player community may be scarce at the moment, but the game just released. As the community grows I can see the multiplayer becoming very popular. Remember smacking Frank with that spatula? Well, why not do it to a friend online?

After the online multiplayer was a bust, I decided to try out the local. The player is able to choose to either play a burger battle or a rocket race. The burger battle pits players against each other to see who can create the most burgers. Rocket race requires players to top off burgers while racing against opponents.

One aspect that I liked about BurgerTime World Tour is that the player could choose between being Peter Pepper or their own avatar. While Pepper may complete the story, playing as your own avatar is cool in its own right. Additionally, you can choose among the different rival chefs, Peter Pepper, your avatar, and Mr. Destructoid for multiplayer.

Graphics/Audio
I truly enjoyed the presentation of this retro remake. Incorporating rotational 3D environments to a classic platformer kept the core game mechanics alive with brand new features. Some of the levels are truly complex where players must pay attention to survive. Yes, I am talking about those darn rocket levels where you need to avoid drills as well as spikes. 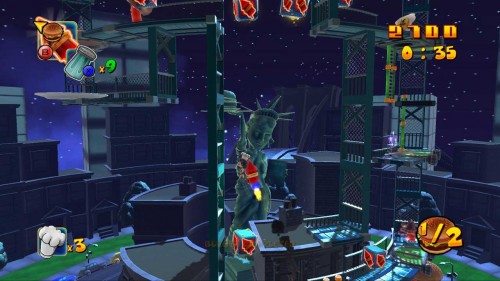 Being able to see the cause/effect relationship between objects made this game fun to see. If there was a wandering egg below an ingredient that just dropped, that egg would get smashed! If an enemy was hit with pepper, you could visually see them stunned. You jump next to a Ruthless Dill; they jump back. In these ways the graphics definitely help create the “Heck Yes!” and “Oh Crap!” moments.

Artistically mastered to mesh a retro feeling into a modern game, the audio produces a good lasting impression. This became most prevalent to me during the score screens in-between levels. As points were being tallied, I couldn’t help but perform a little jig as I heard the fast arcade beats. And no I cannot dance.

Overall
A rotating 3D environment provides an unique game style that keeps your fingers ready. BurgerTime World Tour could be a fast paced game for casual players or a challenge an achievement perfectionist. The single player can guarantee gamers a few hours of gameplay with replayability on different difficulties.

The downfall lies in the lack of readily available online community. Players can easily become frustrated when waiting in queue, and this is no exception. The game modes, burger battle and rocket race, can be fun but still need a community to play consistently.

The migration and adaptation from classic to next generation was a success. While keeping the basic principles the same – except jumping, BurgerTime World Tour exemplifies a healthy transition of gaming in the past 30 years. While the game may be short and multiplayer lacks community, I am very pleased with this title.

BurgerTime World Tour hits Frank in the Furter for