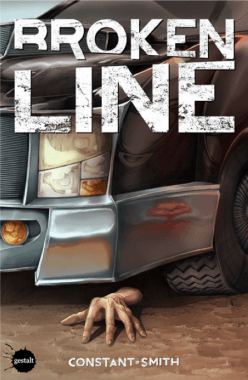 Let’s be honest here…Australia doesn’t exactly have many claims to fame. We’ve got Mad Max, Hugh Jackman and Vegemite, apart from a few other things we’re pretty bare bones when it comes to worldwide popularity though we ARE slowly climbing to the top! Very slowly. A great sense of national pride welled up within me when I was brought to the attention of “Broken Line“. An Australian comic book? With an Australian publisher? Written and illustrated by two Australians? I was hooked. After singing the entirety of the Australian National Anthem and taking a gulp of “Victoria Bitter” (look it up people), I sat down to read issue one of “Broken Line” and this is how it went. 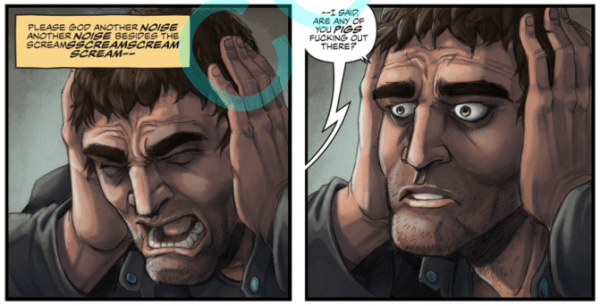 Explaining the story of “Broken Line” will surely prove to be a hard task for me, not because it is convoluted or because it is bad in any way, it’s because it wasn’t entirely explained in the first issue which, may I just say, is quite the confident move. “Broken Line” is set in the post-apocalyptic Australian outback years after a devastating bomb was dropped causing some serious human mutations. Readers follow the story of…well, you’re not actually given his name so maybe, for now, I’ll just call him “Cop”.

Readers follow the story of Cop, a self-proclaimed police officer struggling to survive in the harsh environments. Cop is shown to have some form of mental disease, most likely developed as a side effect due to the large-scale detonation that ravaged the land. Throughout the first issue, Cop fights against the voices in his head constantly trying to out do them or to drown them out in an attempt to regain sanity. He comes into contact with two other humans in the first issue, one of which baits him into a death-match, one that Cop found he couldn’t turn down.

This other man, also unnamed, shared similar traits with Cop which led me to believe he too is in the early stages of something gruesome. The author definitely has balls, it’s one hell of a gutsy move to leave the audience this much in the dark but I’ll be damned if I was to say it didn’t work to keep me intrigued long after I finished reading it.

It’s high risk but high reward. I found it somewhat hard to fully understand the issue with only one read through, I went over it thrice because I was both looking for the proper way for it to be read and curious as to whether or not I could pick something up that I missed the first time around. To say the least…”Broken Line” issue one kept me hooked all the way up to the last page and it definitely left in a state of anticipation for the next issue rather than one that has me sit here negatively wanting more from the issue. There’s a fine line between those two thing and “Broken Line” knows exactly which side to stay on. I just hope that the story doesn’t become too generic but that’s a bridge we’ll have to cross once we get to it. 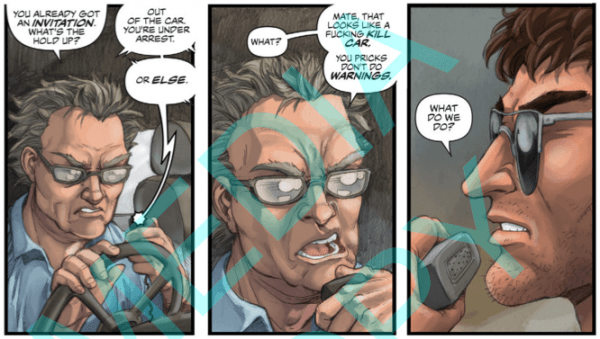 When a comic is given to me with brilliant illustrations and hosting some of the most excellently coloured pages I’ve seen in quite some time I can’t help but immediately become immersed within it. The art style of “Broken Line” blew me away. Emily Smith somehow harnessed the force of the Australian outback and put it on paper, something I’ve never experienced before. The colours were earthy and gritty but oddly soft, it made for some nice shifts between panels of though and panels of action with some of them making quite the impact.

“Broken Line’s” art style constantly jumps from being realistic to somewhat “cartoony” and it’s not that the illustrations actually make a drastic change from panel to panel it’s more that there’s such a subtle mix between the two different styles that one is often more present in certain panels over the other. I really liked it! Action and motion panels were designed so brilliantly and really showed as much motion as a still medium could possibly have done. It’s quite a brilliant feat and it looks like Emily Smith is the master of it. The dynamic lighting/shadowing, the detail, the design, the colour. It was all great!

“Broken Line” took a big risk with it’s first issue, a risk that ended up doing the series so much good rather than making it crash and burn. It’s vague storytelling actually made the comic so much more interesting than it would have been had you been given all of the information upfront and I thoroughly enjoyed it because it forced me to read it over and over until I felt I truly understood what sat before me. I can imagine some people out there wouldn’t be TOO impressed that you’re not given the whole story straight up but I think those people aren’t exactly the type of audience this comic want to attract. The story is intriguing, the art is fantastic and it’s an Australian comic that deserves lots of attention. I definitely want to follow this series and I can’t wait for the release of issue two. Bring it on! 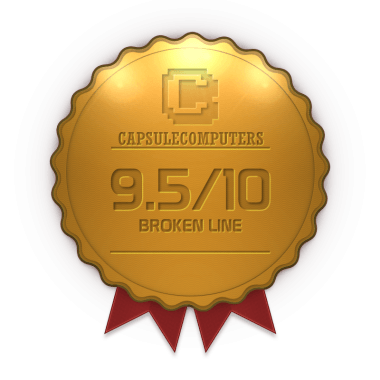