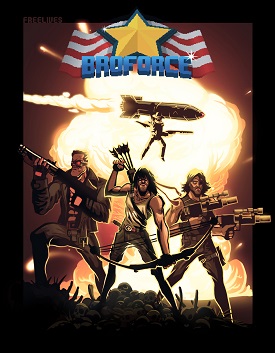 Ever wanted to save the world as some of the most frightening and bad-ass characters ever to walk the planet? Meet Broforce, the indie title developed by Free Lives and published by Devolver Digital (the publishers of Luftrausers) that will let you live that dream. Broforce is a pixel-art platformer that allows players to become some of the most feared action heroes in our history. Rambo, The Terminator, Judge Dredd, Blade, and Neo are just a small portion of the action heroes that players can use to dish out a world of pain. The game is basically a pixelated version of The Expendables, plus a few additional action stars. Broforce is currently in early access right now, with the full build planned for a summer release. Even in its current state on Steam, the game provides countless amounts of fun for anyone who likes to blow things up.

Gameplay may seem simplistic at first, but don’t let it fool you. The game is quite difficult as you slowly progress through the different stages. You control your character with the use of the directional pad, Z is your shoot button, X is for grenades/special attacks, and C is for your melee attack. Of course, these can all be swapped out with button configurations of your own choice. The menu provides quite a few options to choose from. There is the campaign mode, online multiplayer, custom campaigns, level editor, a Race Mode, an Explosion Run, Deathmatch, and your options. Online multiplayer provides online gaming with other players, and you can connect with up to 3 other players. Race mode, explosion run, and deathmatch are all local game modes with another player on the same computer.

As soon as you start a new campaign, things kick off as Rambo, who has a full-auto machine gun and who chucks grenades like a parent on Halloween giving away candy. As you run around the first level, you get used to the controls and how to navigate the multi-floored stages. Jumping against the walls will allow you to stick to them, through the use of your character’s knife. You can climb walls and jump down holes to access different points of the stage layout. The environment is completely destructible and can provide lots of different options for killing an enemy NPC.

There are a few different enemy NPCs that you’ll face off. First type is the typical henchman. They wield little rifles and will shoot every so often once you’ve been spotted. When you’ve been spotted, a huge exclamation mark will show up above their head, indicating that they know you’re there and will fire. They’re so slow that they really aren’t much of a problem, but a large group of them can present problems if you’re trying to fight your way through a narrow corridor. If the enemy NPCs suspect movement, a question mark will appear above them, but it’s still safe for as long as they don’t notice you.

The second type of henchman is a suicide bomber. These little madmen pride themselves on blowing up in your face. If spotted, these NPCs will charge at you, blowing up after a few seconds. It’s pretty easy to get rid of these guys, but watch out if you’re too close and wielding a weapon that can cause them to explode. The blast radius will set off and you will be blown to chunks. These guys are interesting because you can use them as a weapon against their own team. By killing one of these henchman so that they die around their buddies, they will all explode. Can also be used to set off chain explosions with oil barrels and the enemy tunnels/hideouts. There’s also a little mini-boss styled henchman that uses a mini-gun. These guys are bit harder to kill. Takes more than a few shots to get them down.

As you progress through the levels, there are little prisoner cages that you can break free. Inside each of these, there will be a little NPC who is bound in ropes and gagged. Above them will have the words “SAVE” hovering over them. Saving the hostages is how you will slowly unlock each of the action heroes and unlock more lives. Each of these “bros” have their own unique weapons and special attacks, providing every situation with a different way to handle things. Whether you’re “Brade”, wielding his sword to slice through his enemies or “Indianna Brones” with his flare gun and whip, the stage can be set in many different ways. It all just depends on what characters you’ve unlocked and how you want your enemies to die. Every time you save a hostage, you gain a life. When you die and you have a life left, you will respawn at the last checkpoint you’ve unlocked, which is the US flags you unlock in the stage.

The bosses in this game are each different, with their own sets of skills. The first boss you’ll meet is a helicopter who drops bombs in an area and fires off its machine gun after a slight delay. As long as you watch for the signs, it’ll becme easier to dodge the attacks. Every subsequent boss gets a little harder, and each one is unique. The game mechanics, while fast-paced, are recognizable and should be easily thwarted if you start to understand the game.

The visuals are pretty awesome. The pixel-art style that the developers chose for the game rounds out the already hilarious parody of these action heroes from the 80s and 90s. While the game is an action platformer with fast-paced shooting and explosions, the comedic value of the game shouldn’t be forgotten. Everything up to the sounds that the henchmen makes when they die or run away simply adds another tally to the total grade I could give to this title. The visuals and audio meshes well to create a rather addictive experience as you attempt to blow every single pixelated image off the screen.

The game is one that I’ve kept on my radar since it was given the green light signal on Steam. The game is perfectly rounded out with a great cast of characters that is said to still be growing, simple graphics that look way better when playing the game than the screenshots I’ve taken, and an interesting soundtrack with a ton of miscellaneous sounds that really pulls it all together. Besides a few hiccups in the actual gameplay, all of which should be fixed by the time the game makes a full release, and its lack of story, the game is a fantastic platformer that will hook players into a never-ending cycle of spraying bullets and watching explosions fill the sky. 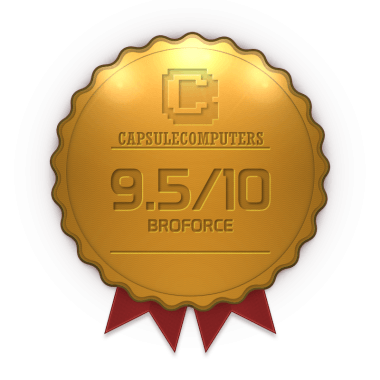