All aboard! Bridgy Jones (no, not Bridget Jones) is an interesting puzzle game where players take control of the title character and chase down a run away train. Filled with creativity, charisma and challenge, it’s sure to keep you entertained for hours on end. Also the game has 32 levels with 120 additional objectives so there is plenty of content. And if none of these are good enough reasons to pick it up I got one more reason for you: Bridgy Jones has a dog named ‘Bonner’. Boom! You’ve got my attention. 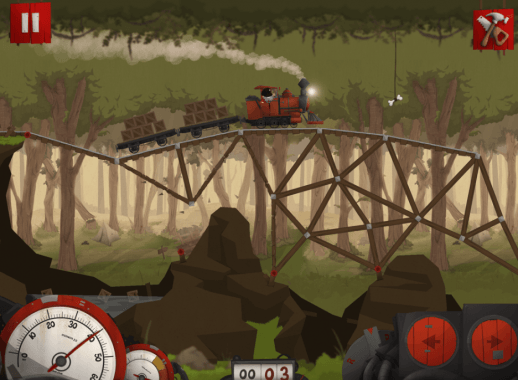 There are two main styles of play per level. The first of which is a creation phase where players must build a track for Bridgy to travel on, the second of which players must navigate him across this path in a platformer fashion. The main focus of the game is on this first style of gameplay where problem solving is your main tool. At first it seems simple: put the train tracks down from point A to point B. But then you come to realize that the train tracks require wood or rope to hold them up and keep it stable. Also sometimes the ground isn’t available so you’ll need to hold it up from the roof, etc. Most importantly, during this state of play the world is held in suspended animation. Once this is over, you control Bridgy and  his train. That’s when rag doll physics kick in. This means that if something isn’t stable it will come crashing down, and if the wood isn’t supportive of the weight enough, it will break. This is extremely entertaining as not only watching senseless destruction is fun, but a trial-and-error approach can be taken towards your gameplay. Sure you can be sloppy and rush through to the end while your architecture crashes behind you sometimes, but building a sturdy path is much more rewarding. Also multiple paths can be taken to find bonuses and more so there is plenty of re-playability on offer. 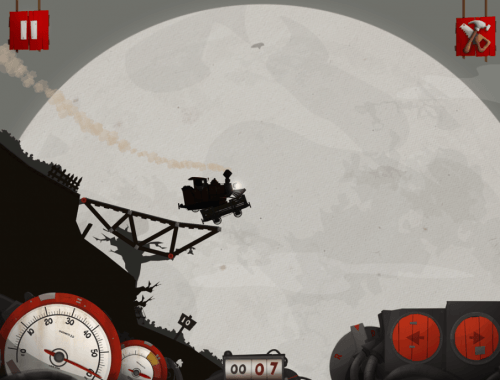 With all that being said Bridgy Jones can be occasionally frustrating. Sure the tutorial works great but after that players are completely on their own. There are no options for assistance or level skipping, so if you get stuck you’re actually really stuck. However I’m sure while some may see this as a negative, others may see it as a positive as it does renforce a challenge. There’s  re-playability as chapter selection is present, and has 120 additional objectives within it’s 32 levels. Sure it can get a little repetitive after a while, but so do most other puzzle games. Plus none of this takes away from the fact it’s a fresh concept that’s executed well. 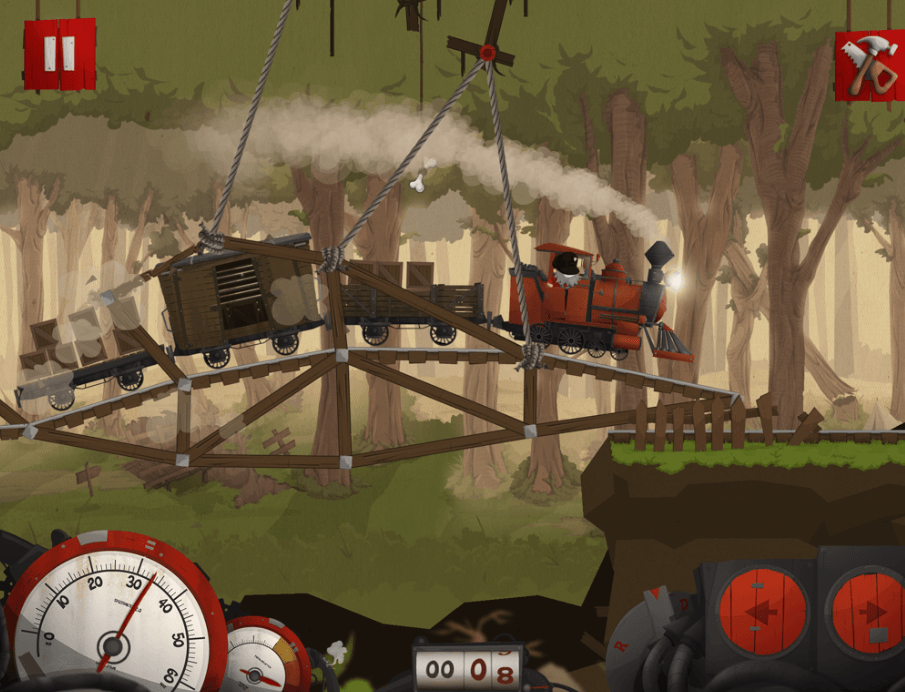 Bridgy Jones is bursting with personality. From the quirky character designs to the humorous dialogue (“hold on buddy, it’s loading”), Bridgy Jones stands out as very unique looking title. The music goes hand in hand with the theme of visuals, which I can only describe as “family-friendly redneck”, so expect to hear quite a few tunes you can have a hoedown to. Strangely, I dig it. It captures the atmosphere of the game and characters and adds to the game’s wonderful presentation. Clearly, Bridgy Jones has had a lot of polish. 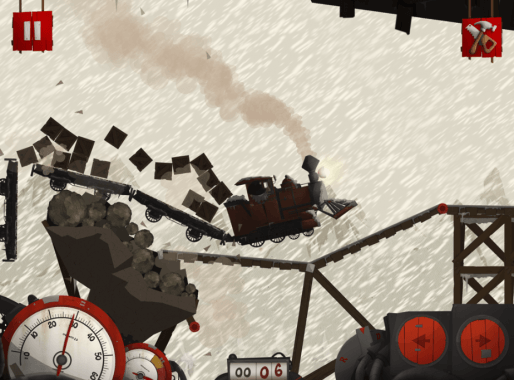 Bridgy Jones is a unique and fun puzzler that’s filled with personality. It’s challenging, fun and full of life. I think it’s pretty clear a lot of time and effort went into Bridgy Jones and the outcome speaks for itself. If you’re after a game that’ll make you scratch your head and maybe even smile a little, jump aboard!