Overview:
Remember the good old days? Before everything became extremely complicated and it took five presses of a button to even swing your sword at the enemy? I sure do and so does Zeboyd Games the makers of Breath of Death VII: The Beginning. Gone are the complicated procedures and back is the pure enjoyment of battling monsters and discovering the truth behind the darkness.

Story:
War never changes, but the ways in which we wage war can change the face of the globe entirely, including those who reside upon it’s surface. During the last great war, an unknown country had detonated a devastating weapon laying waste to the entire globe. Now only one thing could have survived the chaos, and I use the world survived lightly. This is due to the fact that everything in the game consists of the undead and mutated. 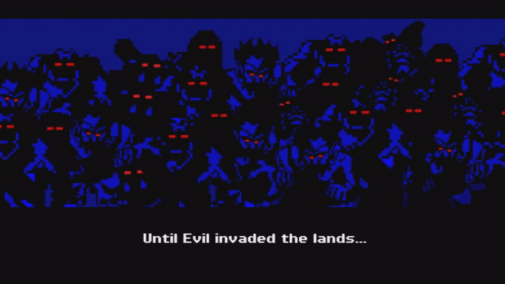 The undead have adapted to their lifestyles as well as can be expected, and sometimes better in most cases as they have much longer lifespans. However darkness has started to rise and many hostile creatures have started encroaching upon the undead, planning on making them permanently dead.

Enter a heroic skeleton named DEM, who is the strong silent time. Though this is because he lacks a tongue. He was traveling alone as all such heroes do, until he is forced into the party of three others. SARA a ghost witch who can read minds, and therefor speaks for DEM, much to his discomfort. LITA a tech-vampire who’s love for machinery only rivals her love of blood. Finally there is ERIK, a noble prince. The only problem is that he is also a zombie. 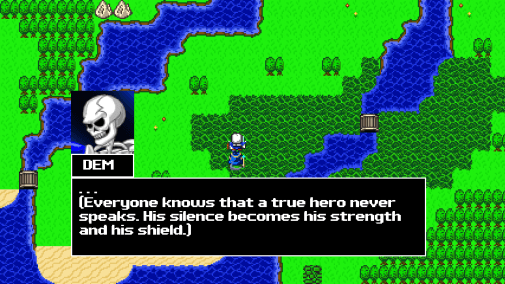 This unique party of heroes must travel the land in search of the secrets of the past, to unearth what they must do to change the future and prevent the evil from wiping out all un-life as they know it. Their journeys will take them from the dankest of caves, to the ruined cities of years gone by.

I greatly enjoy the story for the fact that there is a main twist in it the whole time. The entire world is already dead, and everything in the world is either undead, or a mutant. Even your own party. This spices up an otherwise standard storyline that most RPGs share and puts it’s own little spin on things.

Graphics & Design:
It is literally impossible to judge the graphics of the game by today’s standards. However the game is intended to be in retro style and it pulls that off perfectly. The levels and dungeons in which you fight are well designed splendidly with intricate details and mazes placed within the design.

These mazes are both cleverly done and sometimes quite hidden. There are times you will be traversing through an abandoned city only to find yourself surrounded by unpassable foliage. Thus begins a hedge maze of it’s own design. Sometimes you may find your way out, other times you will find yourself back where you started simply because of the design of the levels. 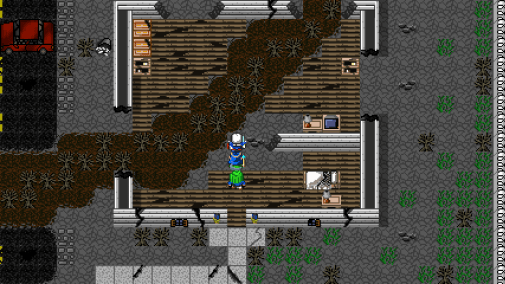 The monsters you will be battling themselves are well designed and only slightly suffer from palette swapping. Even then there are slight differences between the similar appearing monsters. Unlike other games which will swap palettes indiscriminately, BoDVII features monsters that are changed ever so slightly on top of their color. A looter may appear normal one moment, and appear as a devil looter the next with the color changed to red on the skin, however the devil will also have horns and a tail to go along with the standard appearance.

There is one small problem with the blocking of certain areas. In areas that you are approaching a hole or a pit that is inaccessible, the tiles on the floor closest to the hole will shade into darkness near the bottom. This is to provide the appearance that the hole is extremely deep and that the floor disappears down into it. However you are able to walk on these pieces of tile which are the walls of the hole.

By the way, if you noticed that the characters in the game look vaguely similar to those from another game, don’t worry. It was entirely intentional by the developers to have certain characters appear similar to heroes from other retro RPGs, up to you to decide who is who though.

Gameplay:
To start with, the gameplay features random battles. Don’t worry too much though because BoDVII has an entirely new feature that I wish many RPGs had thought of a long time ago. This feature is the limited amount of random battles that can happen in any one area. This feature makes complete sense and in the long run really helps the gameplay. Because if you think about it, there are only so many orcs that can live in a small village, or so many wolves in a forest. Once the battles remaining has reached None! you will not have to worry any further about random battles occurring.

However there is another feature that has been added that is quite nice. That feature is the Fight option in the menu, which triggers a battle immediately in any area where random battles can happen. This is useful for not only grinding levels. But also is useful for if you wish to take out all random battles in an area as soon as you enter, thus making the rest of the dungeon and exploration nice and enjoyable. 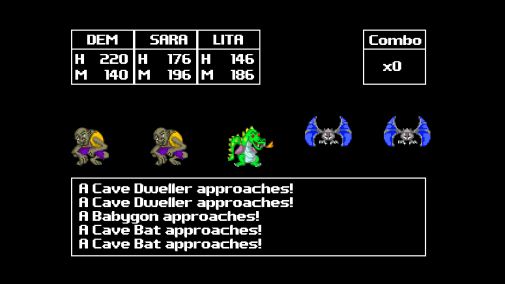 Battles themselves are fast paced and include a combo system. Certain skills usable by your party members will do much more damage depending on how large the combo counter is. When these skills are used however the combo gauge resets to zero. There is also the feature of Unite attacks which combine the abilities of two party members together to unleash a devastating attack on one or all the enemies that stand in your path to the truth.

Level advancement is quite unique as well and this is how the game offers true re-playability. This is due to the fact that after any character in your party gains a level, you have the option of selecting two different skills or stat boosts that your character will receive upon level up. This choice comes with your standard level up stats, and is considered a bonus. You can make your party members full single target destroyers, or have their skills focus more upon an entire group of monsters, it is all up to you to decide.

Characters can equip two different items, a weapon and a piece of armor. The weapons vary slightly depending on how many hits they deal out, increasing the combo counter. Or they also may hit a single target, various targets, or all targets on a map. This requires some thought on how you wish to also develop your characters and supply the equipment to benefit the abilities you have given them. 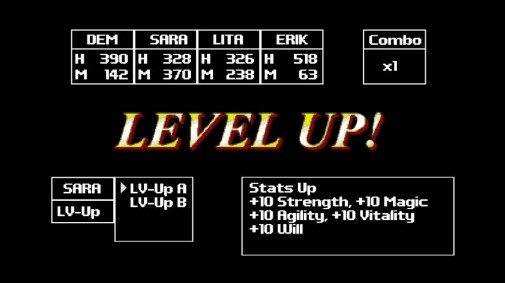 There is one problem here however, when you are purchasing weaponry and armor from stores in town, there is no option to sell back anything that is weaker or that you have double of, or simply will not need. This forces players to carry weaponry that they started with all the way to the end of the game. This is not a very large issue, however it does waste the potential to purchase better equipment that would have been obtainable if you could have sold your older equipment.

Last but not least, the humor in the game is top notch.  Occasionally you will see something that appears to be familiar from another video game, but set up entirely to be the butt of a joke.  During chats with your own team mates you will discover bits of dialogue which will mimic those from other video games and parody them.  There are also situations and map designs themselves that will parody other games.  One small example is the fact that there is a treasure chest behind a door at the beginning of the game, however there is no way to obtain the treasure chest and the game itself even tells you so.

Overall:
Breath of Death VII: The Beginning is a great retro styled RPG and truly stands for what it believes in. Which is bringing back the feel of a retro game, as well as include many parodies and jokes relating towards other video games. There are a few small problems here and there but literally nothing that should steer you away from purchasing this game. Especially not when it only costs 80 MSP ($1).

I give Breath of Death VII: The Beginning