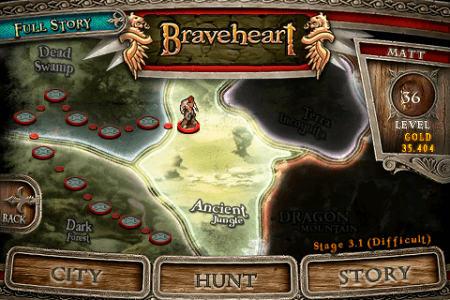 Braveheart is a unique and original action rpg that has players battling with what can seem like hundreds of enemies at a time, defeating wave after wave of foes. While this game could’ve passed off as simply an ok, repetitive level-after-level arcade styled game, Gaijin Entertainment have  kept things fresh by adding a surprisingly deep upgrade system, entertaining cut scenes, engaging graphics, audio and unique controls to create an enjoyable title that stands out proudly amongst its competitors in the app store. And for only $0.99, this title is easy to recommend. And no, this game is not based on the movie Braveheart and does not star the controversial, racist, crazy, wife-abusing actor Mel Gibson, but instead stars the ranga-haired, alcoholic, crazy, blood-thirsty, woman-assulting protagonist Richard. Sure not much of an improvement, but Richard is much more loveable! 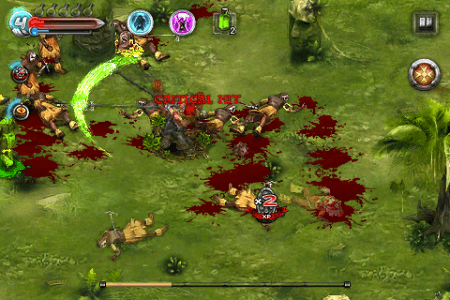 Gaijin Entertainment’s latest title isn’t exactly similar to what players will be used to, and the learning curve would be a long one if it wasn’t for it’s very clear and all-round just straight up good opening tutorial. The game at the core has Richard spinning in circles with his flail repeatedly  and hoping to hit his enemies in time before they get to him, while walking around in circles. Oh yeah, and he never gets dizzy for some reason. Sounds kind of silly? At first it does, and your left wondering ‘how can one dude defeat waves of huge armies of opponents by spinning around in circles like an idiot?’. Well, that doesn’t really matter cause the game is just so damn addictive. With blood flying everywhere, and words like ‘critical hit’ flying up on the screen, gaining experience points, collecting power ups and gold makes it fun. 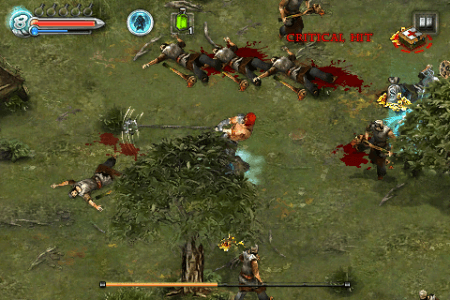 Players early on will get to choose which style of controls they’d prefer: ‘Stick’ or ‘Swipe’. ‘Stick’ will give players buttons on the screen to move the character, while the ‘Swipe’ style allows players to simply point and swipe where they’d like Richard to go. ‘Stick’ can occasionally feel a little forced, but ‘Swipe’ feels a little more natural making it the better of the two, however its nice to have the option of changing one’s playing style. The biggest problem of the game is one element of the controls which is that spinning the flail can often get repetitive and tiresome on your fingers. It can occasionally take away from the experience, however with most of the waves being a bit short and the ability to upgrade in-game, it often hides the game’s repetitiveness. 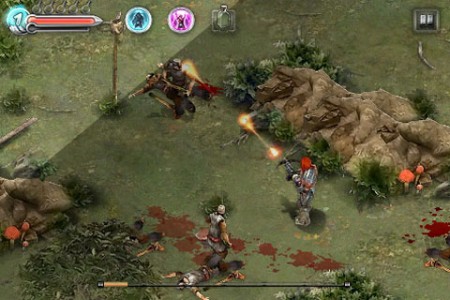 As well as the flail and other flail variations Richard arms himself with a crossbow as a secondary weapon. However it is sadly a low point of the game as it is seldom ever needed, difficult to control and not even that effective against opponents, making it practically useless. While players can upgrade and equip variations of the crossbow, its sad to see it wasn’t as explored as it could’ve been. Boss battles are also a let down, and while they do their job of mixing up the gameplay and putting a nice close to the end of a location, their not as epic and as memorable as they could’ve been, and in the end just serve as more of a annoyance rather than an entertaining, exciting battle. 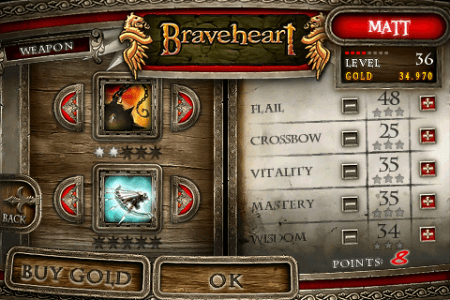 The biggest highlight of the game however is the  attention to detail and the little things to keep the game interesting. Since fending off hordes of opponents can get repetitive very quickly as well as moving your finger in a circular motion to swing the flail, Gaijin Entertainment must have done a great job of keeping such the simple, repetitive core basis of the game both entertaining and interesting. There is a surprisingly deep upgrade system for a game like this. In between battles players can visit the city and buy weapon upgrades, perks, potions and skills using gold collected in battles. Also by gaining experience points from defeating enemies and advancing levels, players can assign points to upgrade Richard’s Flail, Crossbow, Vitality, Mastery and Wisdom, with the choice to decide what goes where, this basic customisation really keeps things interesting. Also entertaining comic styled cut scenes piece together the locations and battles, with a storyline keeping things in place. Braveheart also boasts a ‘Challenge’ mode and the ability to ‘Hunt’ in between levels to gain money and experience as well as other items to level up your character before advancing, which is much needed. There’s also achievements to unlock and a leader board, and with the whole upgrade system there’s a little bit there for replay value. While all these features are standards for the rpg genre, its nice to see them in a game like this as it really does keep a simple game fresh. 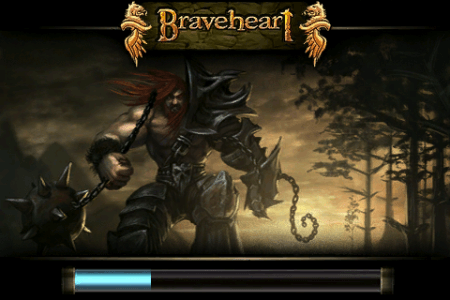 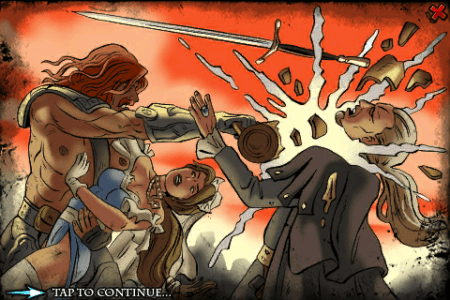 Braveheart must also be commended for its graphics and soundtrack. The artwork in title screens and loading screens are epic, and really add to the already solid presentation. The in-game graphics are nicely detailed but not overdone and the blood looks beautiful. The cut scenes have a comic styled theme to them and are both entertaining and nice to look at. The only complaint however is that the title and loading screens are very serious and dark, while the cut scenes are bright and friendly, with the game itself sitting in the middle of the two. It makes one think about which audience the game is targeted at, and perhaps the developer didn’t even know. The random change in art styles don’t take away from the over all experience as they all look great, but it does raise an eyebrow. The music also gets its job done, keeping the mood of the game with great sound effects to go with it. While the music isn’t all that memorable, it certainly sets the mood for the game. However boss battles could’ve done with some more chaotic, epic tracks on the most part, but the music that’s there is still good. 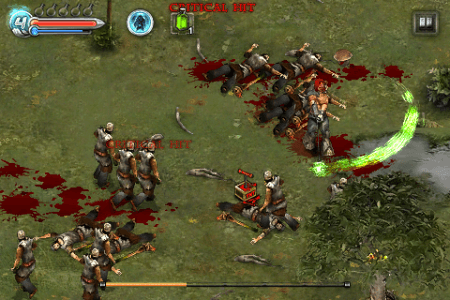 In conclusion, Braveheart ticks all the boxes required to be an awesome, must-have title for the iPhone. Blood and gore? Check. Addictiveness? Check. Originality? Check. Fun? Check. The ability to upgrade and customise your character so you feel like you’ve accomplished something? Check. Able to defeat what seems like hundreds of enemies with ease so you feel like a bad ass? Hell yes! At the end of the day however, its just a few things  like sore finger from constantly spinning your character in circles and great ideas left barely touched upon that stop this game from being a perfect must-have. Braveheart has alot of potential but sadly doesn’t take advantage of it all. Here’s to hoping Gaijin Entertainment works on this for a potential sequel.