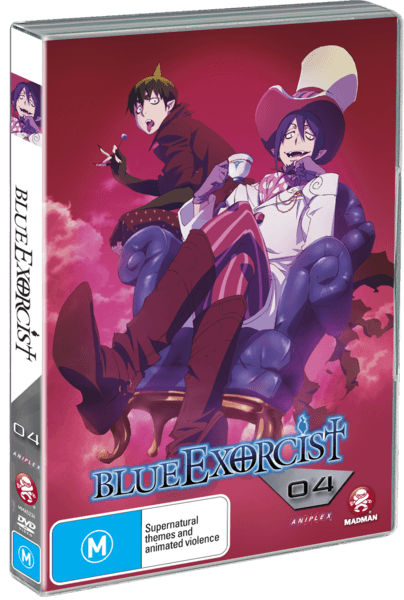 Overview
Deception is a dangerous game, especially when friendship is involved. The fear of being caught out, the guilt that bubbles within. Not a fun endeavour to undertake. But when information could destabilise the very foundation of the society in which you live, is it wrong to hide it? Unfortunately, this is something that Rin Okumura must deal with everyday, as he must maintain his dark secret or else risk his very existence. People apparently aren’t too lenient when it comes to the Son of Satan. Weird. 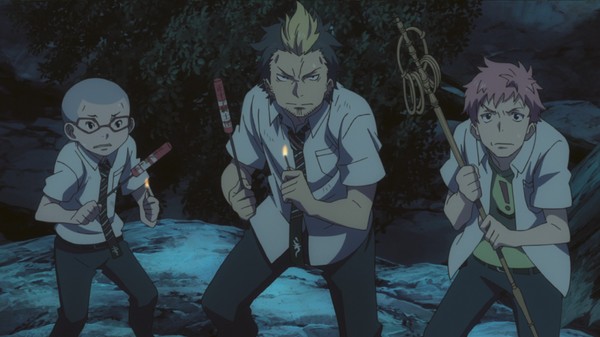 Guys, I hope this plan fireworks

Story
As if it wasn’t already known that Rin’s possessed a rather tumultuous childhood, a brief glimpse back into his kindergarten days reveals the extent of his violent outbursts…it was brutal. Well, by childhood standards…OK, some chairs got thrown and a kid wound up in hospital…also Father Fujimoto had some ribs break…his spirit was fine if that counts for anything. Regardless, it is shown clearly how Rin was treated as an outcast from a very young age and that Fujimoto never gave up trying to help his son.

With Shura deciding to “reveal” herself in the finale of Volume 3, she initiates a little plot development for the series as a whole. She introduces herself as a Knight of the True Cross, a religious order led by the Vatican, tasked with monitoring Rin. It would appear that the Vatican was a tad suspicious of Father Fujimoto, citing the possibility of an allegiance with Mephisto. Deciding to delve right into the heart of the matter, a brief interrogation with Rin sees Shura reveal that she was also given another task, by Fujimoto himself. To teach Rin. Though sceptical at first, Rin’s absolute defiance and desire to “Beat the shit out of Satan” wins the Holy Warrior over. Eventually coming to see what Fujimoto did, she notes that, “He wasn’t raising a weapon, he was raising a son.” It is also revealed that Fujimoto just so happened to be the former Paladin, the highest rank an Exorcist can achieve. Upon learning this fact, a fire is lit in Rin’s heart and he decides to finally take his Exorcist career seriously.This revelation alone sees a shift in his character, as he begins to leave behind his slacker ways and focus on improving. Though its certainly slow going. Old habits die hard after all. 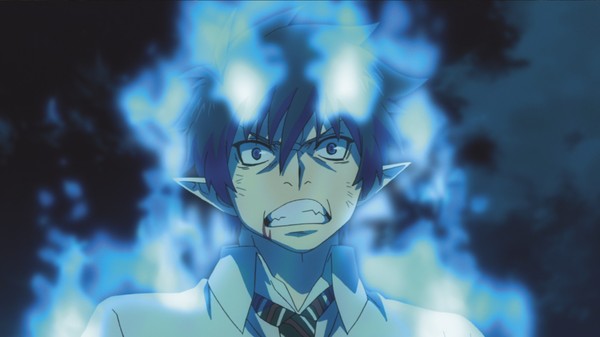 Rin can get a little hot under the collar sometimes

With their new Exwire ranks so proudly attained, the Cram School students discover that they have not yet attained the privilege to accept missions. Luckily for them, a challenge with which will grant them such a privilege is just around the corner. How convenient. Thrown into a demon infested forest, each student begins to realise not only their own shortcomings, but also the strengths that their friends possess. As the students work together to achieve their dreams, they continue to form powerful bonds. Tough guy Bon of all people finally voices his “issues” with Rin. He questions how he can be such a slacker in class, yet still be willing to mindlessly charge into danger to help people. The other students also voice their concerns, noting that as friends it is their duty to support each other.

Over the course of this quest, Rin begins to realise that he hasn’t changed from his childhood self at all. Still lashing out in anger when provoked, he fears that he will cause more harm than good. He struggles with the fact that it may be becoming a habit for him to let loose his demonic powers. Combined with the fact that he is outgrowing the Kurikara Blade’s ability to seal his hellish powers, fears that Rin will “flame up” grows within all who know his secret. Unfortunately for Rin, he is finding it harder and harder to hide his monstrous secret from his friends. As powerful demons continue to hunt the Spawn of Satan, he will have to choose whether to keep himself safe from persecution or use his power to protect those he cares about. 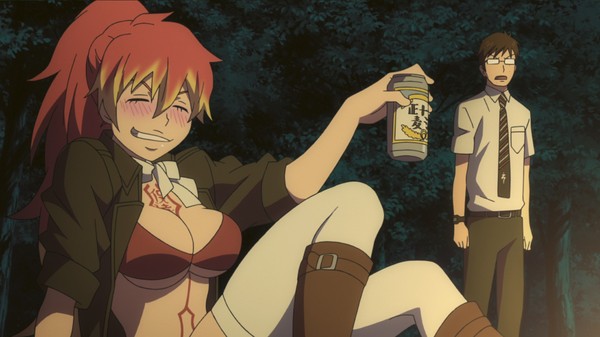 I wonder if that’s alcoholy enough

Visuals
Again it comes back around to Rin and the visual representation of his demonic power. During a fight with a particularly annoying demon, Rin unleashes his power to an extent not seen thus far…and it is violent. Very violent. His flames burn with troubling intensity, blazing outwards from his body, rather than calmly burning around it. His face also becomes twisted in a terrible demonic snarl as his teeth grow even more jagged and his pupils take on a tri-pointed form. All of these elements serve to bring Rin further in line with the terrifying visage of his dear ol’ daddy: Satan.

During the previously mentioned fight wherein Rin goes berserk, the animation does an excellent job of showcasing the full speed brutality of two powerful demons locked in combat. Both opponents move with frightening speed, dealing atrocious amounts of damage to one another. The combat is fluid and doesn’t rely on the typical stop and start method that many anime bouts follow. Even during the typical “cut away from the action” shot, the forest is littered with brilliant blue explosions. Also being stabbed with a Demon Blade looks like it hurts, quite a lot too. 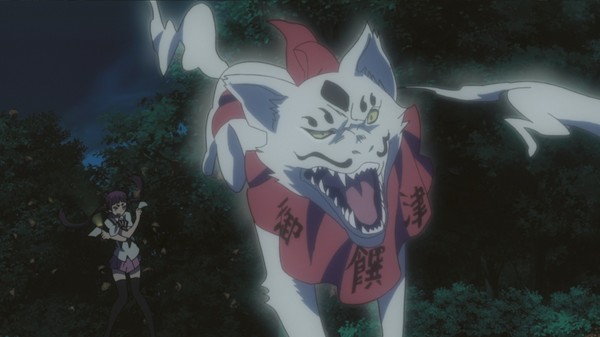 You made fun of the moustache didn’t you?

Audio
The audio track continues to maintain the proportional intensity that it has in previous volumes. Featuring yet again a glorious and haunting choral track, the tunes serve to amplify the drama of combat and plot heavy situations. An upbeat and rather triumphant sounding song entitled “Exorcist Concerto First Movement: Me & Creed” also plays over a brief episode recap. While a small touch, it renews the tension felt the first time those events transpired, avoiding the all too common trap of boring recaps.

The English dub again manages to keep up with the visuals, protecting the series from the horrors of a bland dub. Rin screams with emphasis, Shira slurs her speech after five too many beers and all characters continue to use wonderfully colourful language, such as “Feed that shit to the dogs” and the amazingly simple “Anycrap”. Wonderful stuff.

Extras
Ura-Ex returns once more, bringing this time a perilous story of unequivocal danger. One man, one bug…that’s it. Shima is definitely not a fan of insects. Another short also depicts Kamiki once again showing her cutsey side, fawning over Kuro. The web previews this run around feature the vocal talents of Mephisto, the Peg Lantern, Behemoth, Bara and Amaimon. A textless version of the new opening “In My World” and ending “Wired Life” are also included, along with the usual anime trailers. 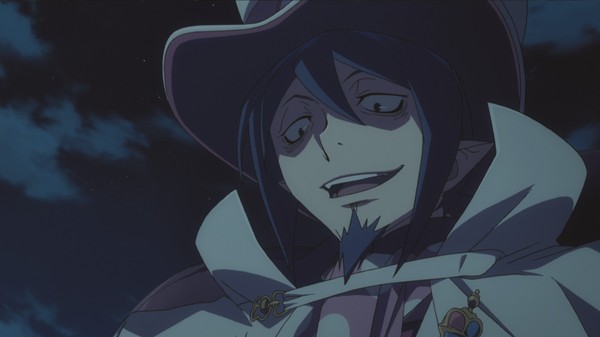 He’s like a riddle, wrapped in a mystery, topped with a hat

Overall
Blue Exorcist volume 4 delves much deeper into the plot that has been hinted at since way back when, in the beginning of the series. The reveal of the Knights of the True Cross serves as yet another spanner in the religious works, as more figures align themselves against Rin and his allies. Rin’s consistent increase in power is also treated with equal parts fear and wonder, with his very fate resting on which path he chooses to walk. When your very hope of salvation is one in the same with the possible cause of your demise, it can be a very delicate balance. The volume itself leaves on the promise of action, as a mysterious new enemy lunges at Rin from within the halls of Cram School. Just how will the Son of Satan respond? Probably violently. Guess we’ll have to wait and see.