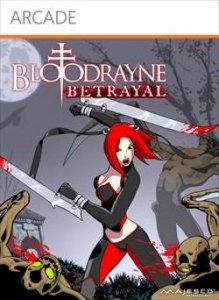 Overview
Recently when I think about vampires, I find myself seeing Alice from the Twilight saga. That’s not totally a bad thing; however, BloodRayne: Betrayal makes Twilight look like “Hello Kitty Playland.” Tell Blade he has a challenger because here comes the half-breed Ms. Rayne.

Story
The story begins with several soldiers outside a castle not ready to take on an undead army. These soldiers are part of the Brimstone Society that is hell bent on taking down the powerful vampire Kagan. Being reluctant to move forward, the guards call in an unlikely ally – Rayne. Rayne must storm through the castle to resolve a final conflict with her wicked father. Along her journey she meets a friend that transforms into a raven. After betraying Rayne’s trust, this unknown friend gives her his power of transmutation. Utilizing all of the her skills, Rayne is able to face her father one last time.

Gameplay
BloodRayne: Betrayal is first and foremost not a casual game. The overall difficulty suggests a gameplay designed for diehards. But the action that envelopes in each level makes the little demon inside you jump for joy.

Starting off, Rayne carries dual blades that can unleash devastating blows. Perhaps cleaving an enemy vampire’s head off is graphic enough for you? Using the blades are necessary in almost any battle and are required to off balance opponents to drain health. 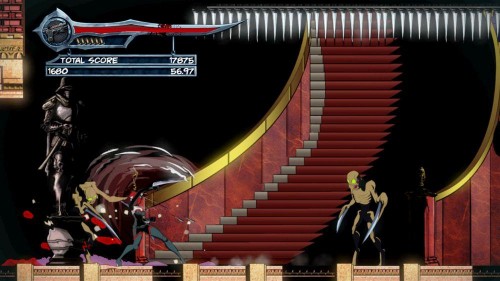 A thirsty dhampir, half-breed, does not need to drink blood for survival. However, blood is the essence that rejuvenates Rayne’s life force. Off balancing opponents is the key objective in drinking their blood.

Biting can prove useful not only for health but also for creating explosions. Rayne can infect an opponent by releasing early after a bite. An infected enemy will turn green and become vulnerable to exploding. What seems to look like a miniature uppercut, Rayne causes any infected creature in the area to explode doing immediate damage to those in the area. Causing a chain reaction may result in an achievement…

Additionally, guns are added to the arsenal of weaponry. The first useable gun is Rayne’s pistol. With limited rounds, the pistol can offer quick kills without moving an inch. With continual bombardments of vampires and other creepy crawlies, a pistol offers reliable kills. Aside from the pistol, an artifact becomes available to use in later levels. The artifact is actually a laser that wears down enemies to nothingness. Taking longer than the pistol, the laser becomes useful to change switches and send walking zombies into an inevitable explosion. Standing on a corroded zombie atop of bubbling acid? No problem! Just use the laser as your navigation and move across the waste like a boat. 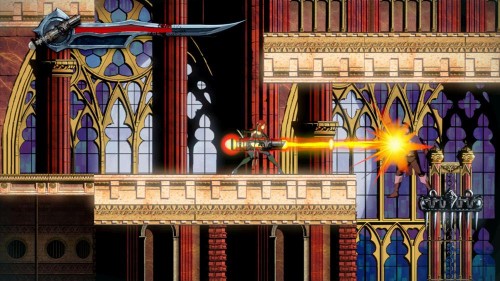 An unique perk to the game is the collection of ancient vampire skulls. By collecting five skulls, you are able to increase either your health or pistol ammo. You may have to play through levels more than once to obtain all of the skulls. Plus, you get an achievement by acquiring all 30 of them.

Each stage has points of interest to accrue time bonuses. A time bonus increases the overall points at the end of each level as well as your rank. Do not be ashamed of a F – “Worm Chow” performance. This is widely attained by most players. By defeating your foes quickly, you may be able to achieve a higher rank. BloodRayne: Betrayal offers re-playability in this way to challenge gamers to get an A – “Dhampir” rating.

Finally let’s discuss why the game is difficult in some areas. Boss battles are definitely hard to complete and take several attempts master – or get lucky. After dying many times, you develop strategies to overcome devastating special attacks. Facing the Crab Puncher is your first taste of death. Understanding the concept of destroying its legs without falling off its back is extremely important. Do not let its spin saw blades touch you, and perhaps you can gain a well worth achievement for being untouchable. 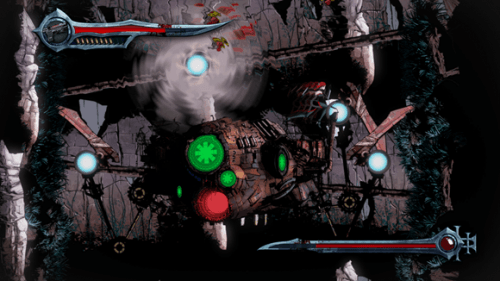 Bosses may be a difficult chunk of the game, but some stages are ridiculous. Level 8 is probably the most prominent memory. Upon reaching a giant saw blade, you must quickly traverse the platforms to avoid certain death. The problem exists when the platforms you cross become increasingly smaller. The first time I saw the end of the blade’s circuit I missed the platform and died instantly by acid. Previously I mentioned this game is for diehards. As you can probably tell, you will die and die hard! (Okay Bruce Willis, calm down)

Graphics/Audio
Blood… there is lots of blood. If you are not too busy sucking it from dying vampires, you are probably spreading it across the battlefield. I am surprised that a player’s controller isn’t covered in blood by all of the carnage. 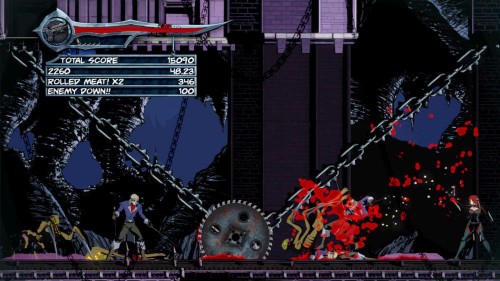 There are walls in BloodRayne: Betrayal that are quite deceiving. Rayne is able to perform wall kicks to climb vertical to other sections of a level. However, not all walls are traversable and can lead to an immediate doom.

The background imagery imitates a Castlevania theme that resonates throughout the entire game. Like many other platformers, imagery becomes repetitive. If there is a staircase, I want to know where it leads to! But with the consistent combat background images fade away from focus.

Considering the in-game sound effects, character injuries and attack sounds interject an intense combative sensation. The only sound that grows tiresome after awhile is Rayne’s death scream. It tends to get overplayed.

Overall
BloodRayne: Betrayal is a hardcore game. This title is not to be taken lightly and to be played quite heavily. Perhaps there should be a disclaimer for gamers that cannot handle dying to stay away. Never-the-less, any male should be attracted to this femme fatale. If you are up for a little old school gaming, at least give the demo a whirl.