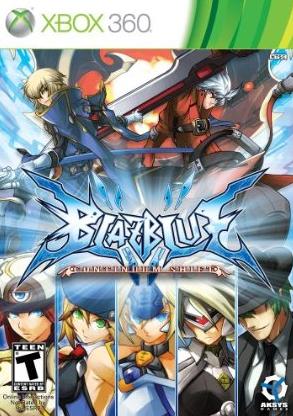 Overview:
Aksys Games has been bringing a variety of different Japanese Games to the United States and across the seas to other nations over the years and now they have done it again by bringing us a top of the line sequel. Blazblue: Continuum Shift is an extremely fast paced fighting game that contains a heavy feel of Japanese anime influences. With being the sequel to one of the most stylized fighting games you will find on the market today, how does Continuum Shift stack up?

Story:
Most fighting games take and place the storyline in the backseat behind the actual fighting. Some fighting games don’t even bother with a story besides a rough background for the characters and why they are fighting at all. But not in Blazblue: Continuum Shift’s case. Those of you who played the first game may have been a bit confused due to the fact that the first game’s story was a little muddled in points and could confuse many people.

The biggest change in the storyline is the fact that in the story mode for Continuum Shift, you will be forced to play as certain characters before you can play other character’s main story modes. Ironically having this linearity bit forced on you allows for a better understanding of the main storyline due to the fact that most of the time you will not be playing out of order from the story and finding out only bits and pieces of the truth.

You will begin playing as Ragna the Bloodedge, and upon finishing his story entirely you will see other character’s unlocked stories. Another feature that has been very effectively translated into the sequel is the fact that each character will have a variety of different endings for their story depending on the choices you make during specific areas. 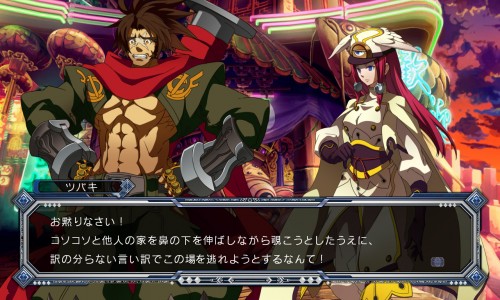 The story itself is very intriguing and rivals those you would find in a standard RPG or Action game. Some of it is still a bit confusing due to the fact that playing the first game would answer many questions the player would have. There is a bit of a “Previously On” movie clip shown, but it is very vague on what exactly happened beyond the barest of details. It would have been better if there was some more coverage for the rest of the cast of characters.

Arcade mode is still in the game, and you will have a very rough dialogue between important fights, but for the most part the storyline in the arcade mode is one of the ones you would expect to see from a standard fighting game. There is a hint of story here and it is definitely a good taste of the full blown story mode which expands upon every little thing otherwise not known in the arcade mode.

Graphics:
As with the previous Blazblue game, the graphics seen in Blazblue: Continuum Shift are top of the line. From the characters to the environment in which you fight on you will find it containing a very Anime styled look. Everything has very bright and vibrant coloring, even the stages themselves that have a 3D appearance when you are being introduced have this appeal.

Every character you will play as is uniquely drawn and is visually stunning. Not a single ounce of character movement is sporadic or broken. Even when you are transitioning between advanced combinations, rapid cancels, and distortion drives you will not see a single graphical error. The characters all have various characteristics that keep them who they are, whether it is Taokaka’s mysterious cat like appearance, to Noel Vermillion being constantly mocked about her figure. 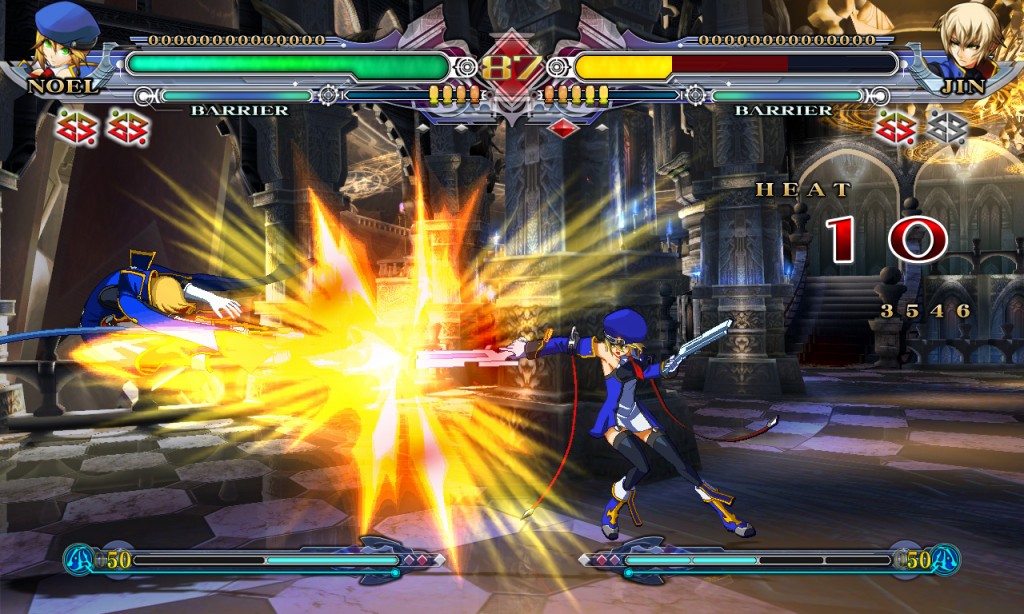 Of course you see a few of your stereotypical fighters, there are hulking masses of muscle, lithe female fighters, and even a unique blob creature that can perform insane techniques that occasionally make little sense other than true evil. Plus each character has upwards of twelve different pallette change selections, which provides a bit of variety though personally I enjoyed playing as the standard palette color for each character but it is nice that the option is there.

Stages are cosmetic in appearance only, but as you may have noticed in the last game, contain so many intricate details that beyond all the action, there will be things happening behind you that may go unseen or unnoticed until a battle hours down the line that will have the player saying wow.

Again the same problem is continued from the last game, but in a way, this problem has been transformed into an advantage to the series. Blazblue has become known as a very fast paced fighter with tons of action happening on the screen at once. This is exactly the same with Continuum Shift. Drive attacks and distortion drives are as stunning as ever, but this can cause a bit of disorientation due to some of the fighters fast paced fighting styles. The fact that so many things are happening at once that you will continuously be fighting for your characters life in the battle.

Sound:
Every level you play will contain a variety of songs to select for background music. Though these songs are not always selectable but when you can make a choice you can usually battle to your favorite music. There is a large selection to choose from, with some containing lyrics and others just being completely orchestral.

Another nice feature is the fact that every single character you play as, and you will see and converse with in the story mode has their own voice actor. Not only are these actors very skilled at providing the voice over for their characters, but they excel at imbuing their dialogue with emotion. This is a nice little touch, especially with characters such as Arakune, who speaks in disjointed English that is nearly indiscernible but matches the character perfectly. 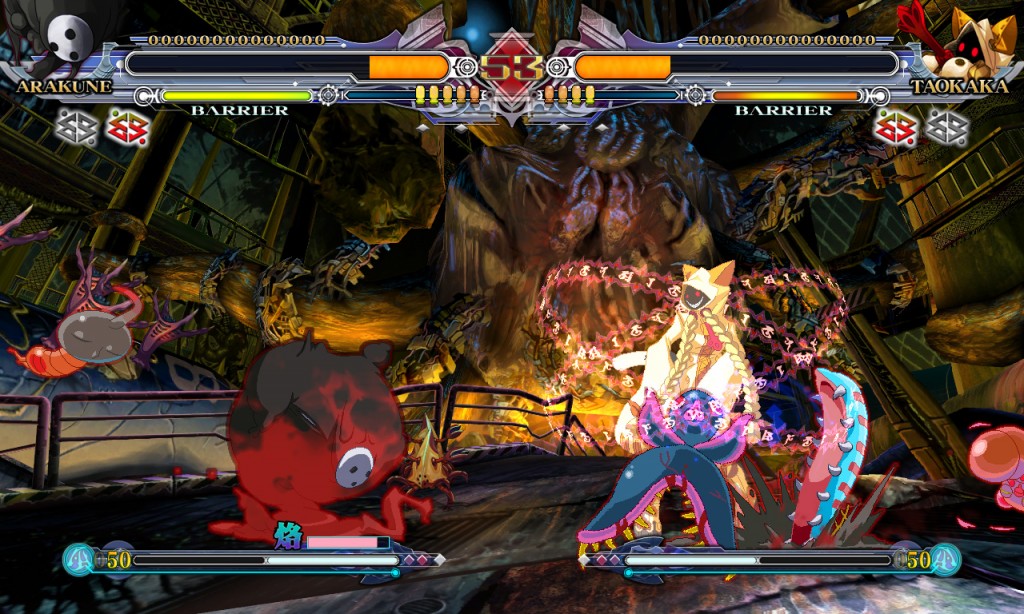 Gameplay:
Hm, for gameplay you stand across from your opponent in a 2D battlefield and then beat each other until one is left standing am I right? No sir you couldn’t be more wrong. Blazblue: Continuum Shift is top of the line when it comes to gameplay. This is not only due to the actual fighting and the changes they have made, but the vast variety of modes you can try your hand in.

There are a variety of modes to choose from but the most interesting addition, was the Training Mode. Most fighting games will include a practice mode, and this one does too, but the Training Mode will literally walk you through every single step of the game. From moving around to performing some complicated combination attacks you can find it out in the Training mode, a very nice feature that helps introduce beginners to the game.

Speaking of beginners, a new option was also included in Continuum Shift, which is called Beginner Mode. This mode quite literally reduces advanced combination attacks to simple button presses that would otherwise be complicated to perform. This will give a nice feeling of accomplishment and accessibility even if they are not fighting aficionado. One thing I disliked however is that the actual controls for certain attacks did change for this mode, and they become un-adjustable. But then again this is fixed simply by shutting off the Beginner Mode option. 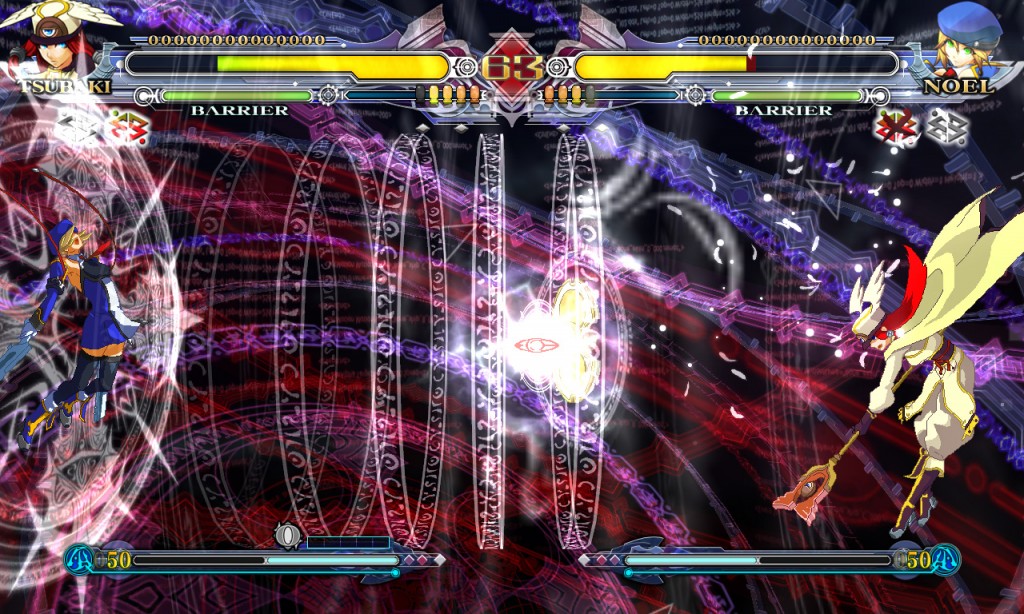 But enough about the beginners, what if you enjoy destroying your opponent in any way possible? Well there are tons of different ways to do so and your fighting style can most assuredly have a character perfectly paired with it. As you do battle with your enemies you will slowly begin to gain something called a Heat Gauge at the bottom, which will allow your character to perform special attacks called Distortion Drives, and even extravagant Astral Heats. A nice little feature is that you can issue a taunt towards your opponent once during a match which will fill your gauge entirely. Thankfully this was balanced to having only one use because otherwise it would be easily exploitable.

Three new characters are making an appearance in this fighting game, Tsubaki Yayoi, Lambda, and Hazama. These characters are initially available for play when you begin the game, and they continue to carry the same new and unique fighting feeling you will experience from Blazblue: Calamity Trigger. The only character which acts vaguely similar to previous characters is Lambda, but this is explained due to the fact she is also a Murakumo unit, much like the character she plays similar to, Mu. Also fans of the previous game may remember who Tsubaki is. They will definitely recognize Hazama who handles extremely uniquely compared to the rest of the fighters, with drive techniques that send him across the screen via his snake like chain weapon.

The fights themselves are very fluidly handled and can be adjusted for a number of different rounds.  Most story mode battles only result in one fight to start with, but Arcade mode can be adjusted for upwards of three wins to be victorious.  Each character is handled well with a light attack, medium, and heavy attack.  The heavy attack usually uses the character’s weapon or special skill as an attack, but the Drive attacks are still the most powerful and unique as they take advantage of the character’s special skills to destroy your foe.

Special  combo’s are still simple to do with a nice instruction guide on how to perform each technique a character has, but there is no longer a short cut option to perform the distortion drive attacks like there was in the first game.  This is a bit of a sad thing to have seen change due to the fact that some character’s distortions are a bit complicated to pull off, but more rewarding when you achieve one.  Plus it helps balance with the taunt skill which I will discuss later.

If you so happen to have played the first Blazblue game, you will find some different things changed around. Some of these are unfortunately for the worse, as the guard break system has become a bit of a point system. Before each character had a specific block gauge which when depleted would cause a temporary immobilization. In Continuum Shift there is now a Guard Primer system, which has more points depending on which character’s you are using. This makes a tad bit of sense, as the young Carl would not be able to stand as much punishment as Arakune or Tager. These points can be depleted quite fast due to some characters having a small amount of points, which creates a bit of a balancing issue. 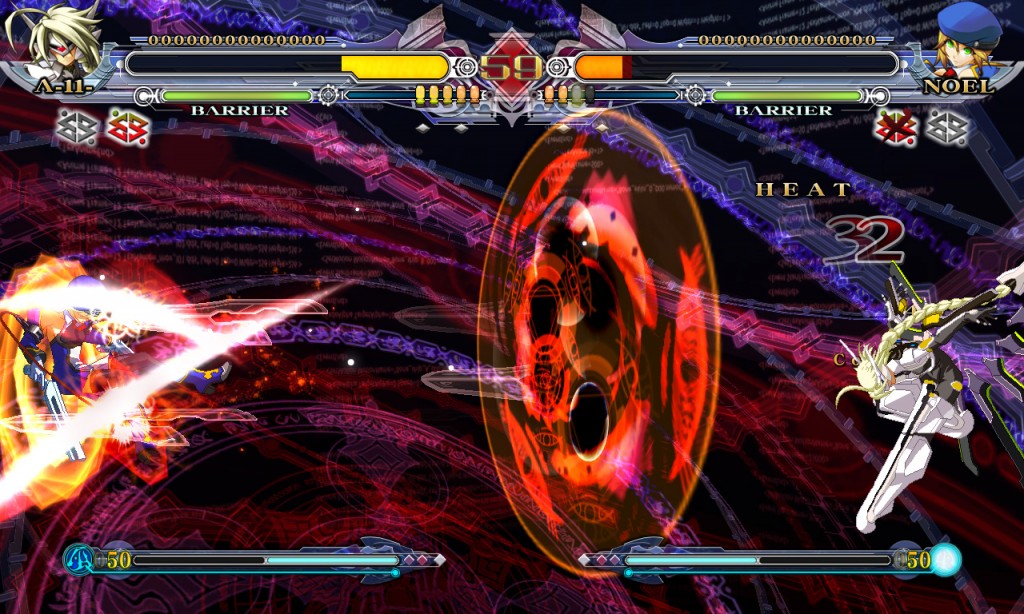 Astral Heats have also been modified, which will make many players happier due to the fact that the requirement for performing this finishing move sometimes killed the opponent on accident. Rather than having only 20% of the enemies HP bar left, you can now perform these tasks with 35% HP. This allows for a better opportunity to perform these heats and not risk defeating your opponent before hand.

Overall:
Blazblue: Continuum Shift continues the legacy that Calamity Trigger left behind. The story literally continues days after the events that occurred in Calamity Trigger, so if you were interested in what happened in the land of Kagutsuchi you will not be disappointed. A few adjustments were made to the fighting mechanics, but fans of Blazblue, or any fast paced fighting game will not be disappointed when they play Continuum Shift.

I give Blazblue: Continuum Shift