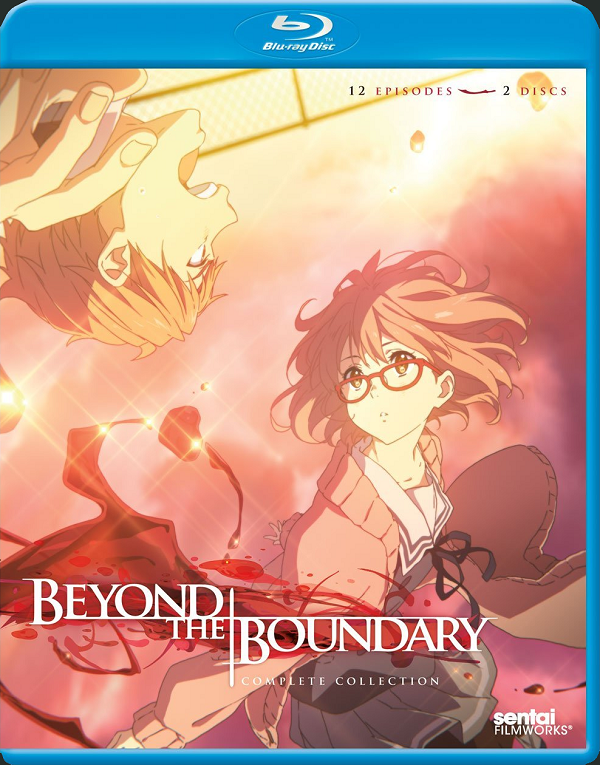 Over the years Kyoto Animation has earned quite a reputation for themselves with their adaptations of light novels and manga series. More often than not these series become quite popular though there are a few that end up slipping through the cracks. Now that Sentai Filmworks has released Beyond the Boundary in the West, is this a series that fans will be remembering for some time to come?

If most people saw someone who looked as if they were preparing to jump off the roof of a building they would generally try to intervene or call for help in order to prevent the person from harming themselves. Rarely however is it because they look so cute in the glasses that they are wearing nor do their efforts result in the potential jumper stabbing them with a red sword. That is what happens to Akihito Kanbara however as he meets Mirai Kuriyama one day after school. 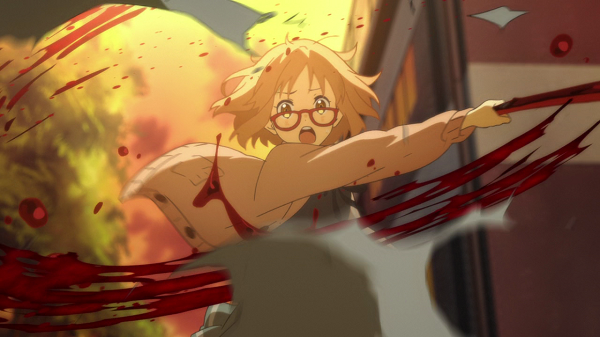 While this would generally be the end of the story, the world of Beyond the Boundary is filled with plenty of strange creatures that most people know little about and it just so happens that Kanbara is one of these oddities. He is a half-human and half-yomu, yomu being supernatural creatures that appear throughout the world and thanks to this unique nature Akihito appears to be immortal.

On the other side of the spectrum Mirai Kuriyama is a rookie Spirit World Warrior who keeps to herself thanks to the fact that she is the last descendent of a family that has been called a cursed bloodline. You see, Mirai’s red blade comes from her “gift” for being able to control her own blood as a weapon and thanks to this ability she has been shunned by the rest of the supernatural world. 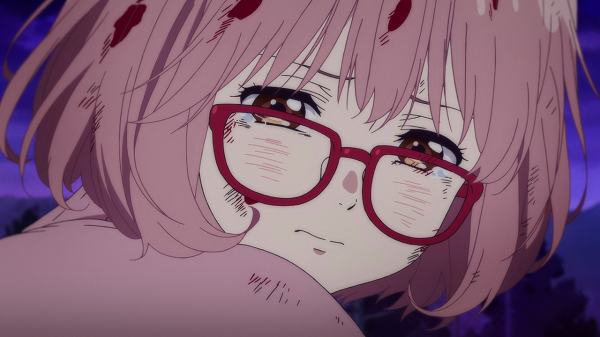 After this chance meeting, Mirai continues to attack Akihito thanks to him never being able to truly die from her attacks and slowly the pair begin to open up with one another and even go so far as to work together in order to help Mirai take down yomu since not only does doing so help her earn some money, but eventually allows her to conquer an enemy from her past. However all is not always as it seems in the Spirit Warrior world and after an extremely close call reveals that those who appear close to Akihito aren’t exactly his friends and that the yomu half that he is keeping inside of him is beyond anything that the world has seen before, viewers are in for an interesting albeit somewhat stunted story.

One of the best aspects of Beyond the Boundary is the relationship between Akihito and Mirai as the pair begin with a rather awkward and comical relationship as she clumsily tries to take him down as practice while he avoids her in numerous ways and as the story progresses we see these both of these characters develop as they learn about one another’s hidden natures and work to help one another. Thanks to the pacing of the series, these developments appear fairly scattered and even seem to vanish completely at times as the tone flips between dramatic and psychological to simply delivering what one would guess as filler content as a comedic method to try and help show a separate side to the supporting cast and the main pair. 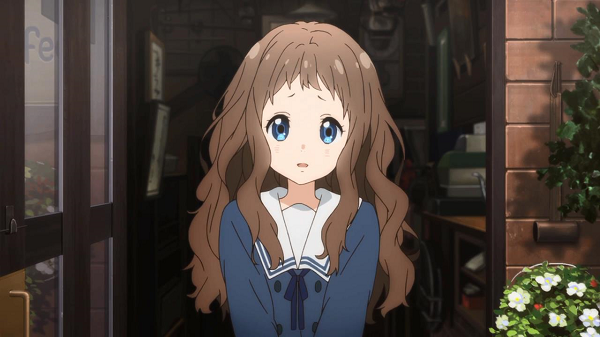 As for that supporting cast, Beyond the Boundary features a number of enjoyable side characters in the form of Mitsuki, Hiromi, and to a lesser extent Ai. The former two characters are guards to keep an eye on Akihito but despite this the two rarely act cold towards him and in fact appear to be his closest friends while Ai serves as the cuter side-character who is also a yomu and interacts with everyone like normal, going to show that co-existence is indeed possible.

Despite the fact that these characters fit rather well with the main pair, it feels like their inclusion isn’t handled in the best way possible as the middle part of the series tries to help develop the supporting cast while also providing some comedy thanks to the strange cases the group takes on but unfortunately none of this really helps make the side characters stand out in any way nor make them any more interesting than they initially come off. This becomes a bigger problem than it should be thanks to the fact that most of these smaller developments feel incredibly rushed and while comedy works well in a series such as this to help offset the dramatic swings the series can take, it simply isn’t handled well enough to work most of the time. 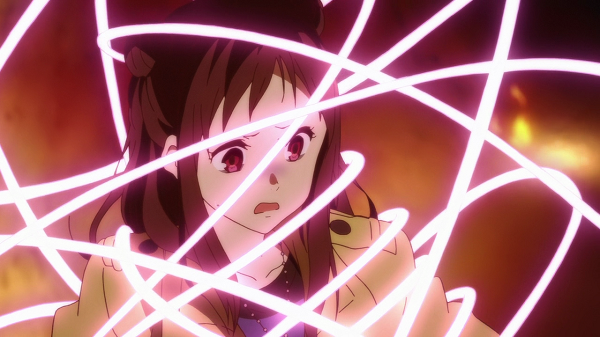 Of course everything starts to accelerate towards a conclusion near the end of the series and thankfully I will say that Beyond the Boundary does take enough time to actually handle this conflict well by not rushing the developments that take place. Sadly it is a bit predictable considering viewers can guess from the get-go what is going to happen what with both main characters possessing very powerful opposing abilities. That being said, although the ending series of events do come off as predictable the writers have handled it in a personal way that actually portrays how high the stakes are and just how important it is that the main characters are successful.

One of the best aspects of Beyond the Boundary is how great this series looks. Thanks to the high production values of this series viewers are in for quite a treat as the character designs are well handled and all of the animation is extremely fluid. This really pays off during the many action sequences that take place throughout the title with well-choreographed movements and great attention to detail making sure that no shortcuts are taken. 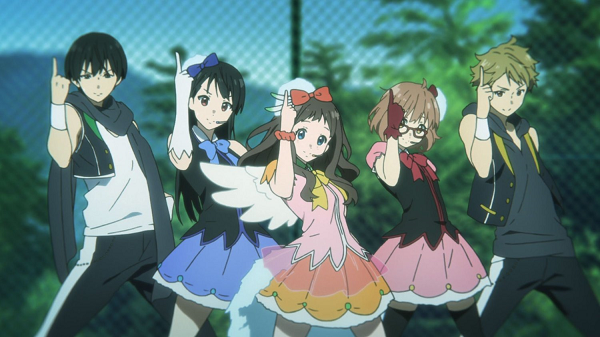 As mentioned before, the character designs are nicely presented with the focus often being on making sure the characters look cute with Mirai being the most memorable of the group thanks to her smaller stature fitting her initial nervous personality.  The backgrounds are highly detailed and are nicely varied considering the many unique locations the characters end up with when dealing with the yomu.

With the release of Beyond the Boundary in the West Sentai Filmworks has decided to include an English dub track to go along with the Japanese voice work. The English cast does a good job with their roles with Krystal LaPorte’s handling of Mirai and Monica Rial’s Mitsuki Nase being the best two examples as their voice acting fits the character personalities perfectly. 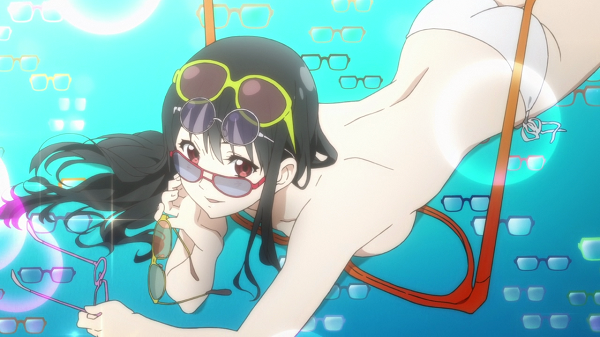 As far as the soundtrack is concerned, there is a nice mix of dark themes that work into the action scenes and keep the tension high while the more light-hearted tracks used during comedic scenes are rather forgetful. The opening theme “Kyoukai no Kanata” by Minori CHihara works well while the ending theme “Daisy” by Stereo Dive Foundation is a satisfying closing theme.

With the standard Blu-ray release of Beyond the Boundary Sentai Filmworks has included their standard clean opening and closing animations as well as Japanese promos and trailers for other products from Sentai Filmworks. Alongside these standard inclusions the company has also included five short “Idol Trial” episodes that run about six minutes each. These shorts are presented in Japanese only and help provide some extra humor that is fairly hit and miss.

Beyond the Boundary may tell a story that anime fans can predict quite easily but it does so in a rather pleasant manner. There are some faults along the way as the mid-point of the release features some of the weakest moments but thankfully the rest of the story prior and after these episodes help make up for it. With some fantastic looking animation providing fluid fight sequences and characters that, although many are underdeveloped, help add some emotional impact to the final events of the series. Beyond the Boundary may not try anything new but does a great job telling its own story.
Capsule Computers review guidelines can be found here.