Ben 10 is a huge franchise, with a few different versions existing. Alien Force is one of them, set five years after the original series with an older Ben, a darker tone and more serious story line. The point of all of Fuel Duel? To save Kevin, who seems to have gotten himself trapped in a not so friendly facility with a tonne of bombs.

So, how does Fuel Duel rank as a Ben 10 game and does it represent the way that Alien Force departs from the original series?

Fuel Duel is a fairly simple platforming game. You are put in a map with six bombs to defuse, and six lives to do it with. Although, if you die the bombs are all reset and you are sent back to the beginning, so dying is more of an inconvenience than anything else, given the many lives you are given. 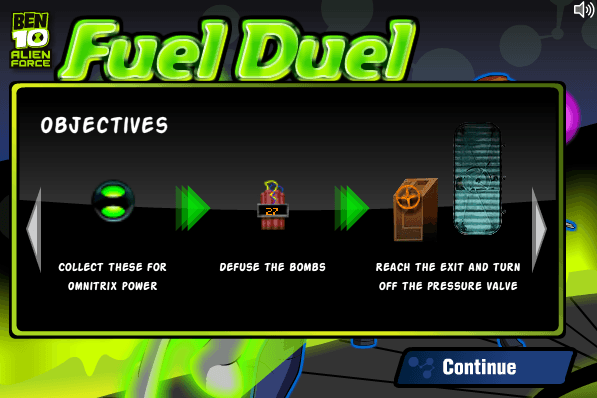 Gwen is also helping you out, with her awesome glowy pink powers. Whenever she comes into contact with a pink light she creates platforms that help you cross previously impossible gaps. You can transform to Echo, a cool little robot dude, and when you come into contact with green light he can shout, which stops the acid waterfall obstacles. The combination of these two make the map far easier to traverse than it seems at first. It’s just a matter of using a little problem solving skills to know when and how to use them successfully. 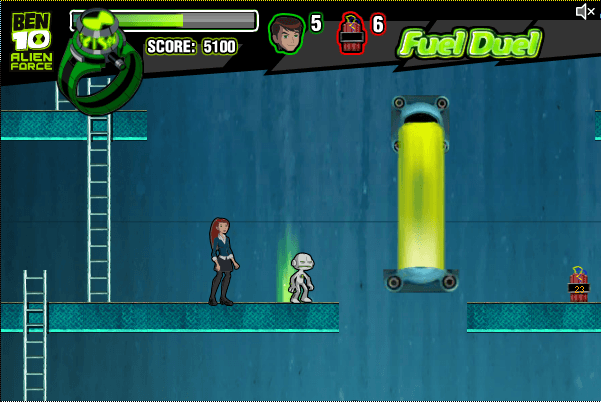 The countdown on the bombs is fairly generous, although the fact that there are quite a few, and they’re scattered means that they are a bit of a pain. The bombs lower to the ground also have less time for you to reach them, so if you miss one of the lower ones then you’ll generally end up running out of time and failing the mission. For this reason keeping an eye out in the beginning of the game when the camera pans over the location of each bomb is useful, and not something to impatiently ignore.

There are also ducts that shoot out bursts of air that apparently kills Ben. I guess they aren’t just your standard air-con ducts, which isn’t something that gets explained, so this was a bit of a frustrating lesson to learn, but they’re easy enough to dodge and avoid. 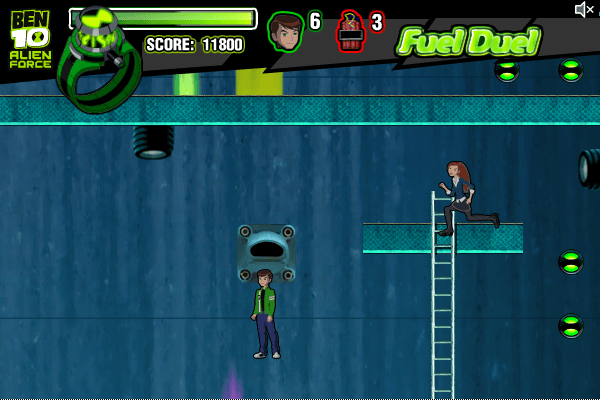 There are a couple of lag issues, which get frustrating since the game is time based. These usually correct themselves if you’re patient and just keep playing, but given that the game is preloaded and the gameplay doesn’t rely on the internet connection, it is worrying that lag is experienced.

I also managed to accidentally hack the game and save Kevin by doing nothing at all, by pressing a few keys on my keyboard. This was a little disorientating, and given that it was only three keys, more than a little weird. Which either means I have the genius touch, or there is something wrong with the game’s script. Then I had to reload the page, because it simply skipped right to my victory page every time I tried to restart the game. 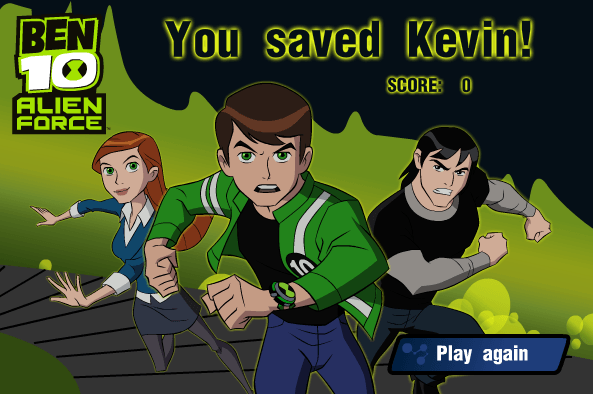 Still, despite these issues with the game, it is fun and an interesting game that provides a bit more of a challenge than most flash games based on a cartoon series. There isn’t a lot of replay ability, but while it lasts it is enjoyable.

Fuel Duel has fairly simple two-dimensional graphics, but they work well for the platforming style of the game. It isn’t anything too flash, but all the characters and art style matches that of the cartoon so it looks fairly good. 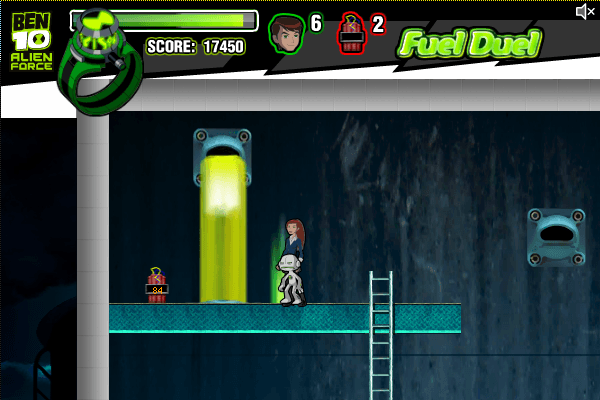 The layout of the different features of the game such as bombs left to defuse, lives, and your energy gauge are all well set out and easy to glance at quickly while you’re trying to beat the clock. While it doesn’t let you know the countdown of the clocks, this can either play in your favour in that you don’t get freaked out, or screw you over by meaning that you relax more than you should.

The soundtrack itself is pretty cool; it’s all dramatic action music that matches your struggle to make it to the top and save Kevin. This is complemented by sound effects for the various things around the map. However, the sound gets randomly buggy and you’ll find that some of the sound effects will start piling on top repeatedly and it’ll end up being one annoying mess.

Ben 10: Alien Force – Fuel Duel is a fairly easy game to learn, but one that will give you a decent enough challenge, however there isn’t much replay ability. There are also quite a few technical issues with the game, however if you are patient enough to last them out and turn off the sound, then it is enjoyable. It’s just a matter of getting to the point where you can ignore the issues and find ways around them.